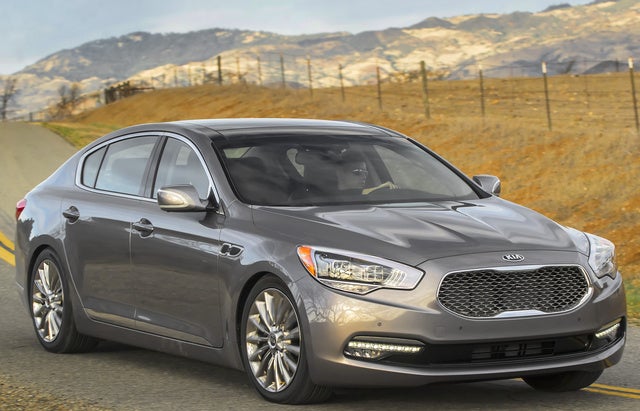 Kia has previously attempted creating premium cars for bargain prices, but the K900 was arguably the brand’s first credible effort when it arrived in 2014. As a relatively rare vehicle, changes have been fairly limited, and are absent in 2018 as Kia readies an all-new second-generation K900 for 2019.

From the outside, the K900 approaches the large luxury flagship sedan class in a very formulaic way. The proportions, shape and details are all there, but aren’t particularly distinctive. It comes off as looking like a few of its competitors, especially the contemporary BMW 7 Series. About the only thing that identifies it as a Kia is the inclusion of the brand’s “Tiger Nose” front grille. That said, it’s still a handsome profile. Inside the K900, you’re greeted with limousine-like space for all occupants, giant expanses of genuine wood and supple grades of leather, impressively-crafted switchgear. Even if the design isn’t groundbreaking, there’s no mistaking this for anything other than a luxury.

Kia offers the K900 with one of two engines. For base duty, there’s 3.8-liter V6 with 311 horsepower and 293 pound-feet of torque. A 5.0-liter V8 with 420 hp and 376 lb-ft is also on offer. Both engines are coupled to an 8-speed automatic transmission and drive solely the rear wheels.

As far as safety, the K900 has a reversing camera, a front camera, parking sensors, blind-spot monitoring, and rear cross-traffic alert are bundled with every model. Lane-departure warning, automatic emergency braking, a surround-view camera, and adaptive cruise control are optional. Even into its fourth model year, the K900 has not been crash-tested by any major agency.

The Kia K900 has the goods to be considered a solid luxury sedan. It remains a bargain for those not willing to fork over nearly six figures for similar cars from luxury brands, or for those looking to move up on a budget. Look for an all-new model to bow in 2019.