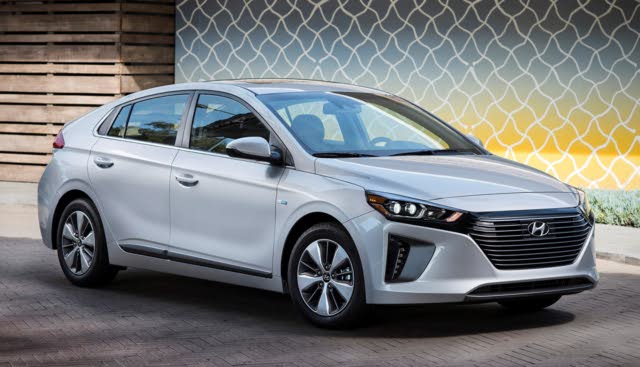 Hyundai expands its new line of Ioniq fuel-efficient hatchbacks for 2018 with the introduction of the Ioniq Plug-in Hybrid, which joins the existing Ioniq Hybrid and Ioniq Electric in showrooms. Equipped with both a gas engine, an electric motor, and a battery pack under the rear seat, the Ioniq Plug-in Hybrid can travel up to 29 miles at speeds of up to 75 mph on electric power alone. Thanks to its plug-in capability, owners can charge the car's battery pack at any public charge station around the country. With the gas engine and electric motor working together, the Plug-in Hybrid has a total range of around 650 miles between fill-ups, and it offers more combined horsepower—139 hp—than its primary rival for better performance in most driving situations.

The Plug-in Hybrid's charging portal is located on the left side of the vehicle above the front tire. Owners can charge the battery using the supplied cable and either a 110/120-volt standard household outlet or a dedicated 220/240-volt outlet. With the household outlet, it takes about 9 hours to fully charge the battery. Using a dedicated outlet can reduce charging time to a little over 2 hours. Owners can use Hyundai's Blue Link app to schedule charging times overnight during hours with low demand and lower rates. Hyundai also works with the ChargePoint electric vehicle charging network to provide owners with details on more than 32,000 charging stations nationwide.

The Plug-in Hybrid's powerplant also includes a 1.6-liter direct-injection Atkinson-cycle 4-cylinder gas engine, which it shares with the Ioniq Hybrid. The gas engine produces 104 hp and 109 lb-ft of torque, for a combined output of 139 hp. The engine connects to a 6-speed EcoShift dual-clutch transmission with Shiftonic instead of the typical continuously variable transmission (CVT) found in most hybrid vehicles. When operating in hybrid mode using both the gas engine and electric motor, the Plug-in Hybrid posts a combined fuel economy number of 52 mpg. Like many fuel-efficient vehicles, the Plug-in Hybrid delivers moderate acceleration and performance in electric Eco mode, but a Sport driving mode makes adjustments to the steering and transmission for improved handling and performance.

The Ioniq Plug-in Hybrid shares its new dedicated hybrid front-wheel-drive (FWD) platform with the Ioniq Hybrid and the Ioniq Electric. It gets good marks for its ride and handling, and reviewers say it's an easy car to drive both around town and on the highway. Hyundai notes that positioning the battery beneath the rear seats helps ensure a low center of gravity, resulting in good balance and stability. Power-assisted steering and regenerative brakes designed for quiet operation both come standard.

Thanks to its fluid, aerodynamic exterior design that emphasizes function rather than flash, the Plug-in Hybrid boasts a class-leading drag coefficient of just 0.24. The sloping hatchback roofline creates an attractive profile, but it reduces headroom for passengers in the rear seat. The use of aluminum in the hood and tailgate keeps the weight down to improve mileage further. Narrow headlights up front frame a hexagonal grille with active grille shutters; a rear spoiler finishes off the look at the back end.

Hyundai offers the Plug-in Hybrid in Base and Limited trims for its first year. Both come standard with LED daytime running lights, LED taillights, power side mirrors, and automatic headlights. The Limited also includes such features as LED headlights, heated side mirrors with integrated turn signals, and chrome accent door handles. An optional Ultimate Package for the Limited trim adds HID headlights with Dynamic Bending Light— angling headlights as the vehicle turns—as well as rear parking sensors, smart cruise control, automatic braking, and a number of other advanced safety and interior features. Both trims ride on distinctive 16-inch Eco-spoke wheels unique to the Plug-in Hybrid.

Inside, the five-passenger hatchback offers more interior space than competitors. The stylish cabin displays an upscale look with an efficient design, eco-friendly materials, and intuitive controls and technology. Even the Base trim comes well-equipped with standard features such as heated front seats, dual-zone climate control, push-button start, illuminated vanity mirrors, a 7-inch touchscreen, satellite radio, and a reversing camera.

The Limited adds leather upholstery, a leather-wrapped steering wheel, a 10-way power-adjustable driver's seat, and a 7-inch LCD instrument cluster. Both trims also include a 60/40-split rear seat and tech features like USB ports and support for Apple CarPlay and Android Auto apps. The optional Ultimate Package for the Limited adds navigation with a larger 8-inch touchscreen, an upgraded 8-speaker Infinity audio system, an auto-dimming rearview mirror, and wireless charging. Owners can also add an optional power sunroof to the Limited trim.

The Base trim comes equipped with all of the expected standard safety features, but to get advanced safety features like blind-spot monitoring and rear cross-traffic alert you'll have to opt for the Limited trim. Hyundai offers automatic emergency braking, lane-departure warning, and smart cruise control as options on the Limited trim. Given its recent introduction, the Ioniq has not yet been safety-rated by the National Highway and Traffic Safety Administration (NHTSA) or the Insurance Institute for Highway Safety (IIHS).

What's your take on the 2018 Hyundai Ioniq Hybrid Plug-In ?

Have you driven a 2018 Hyundai Ioniq Hybrid Plug-In ?
Rank This Car

Is a disassembly guide for the charging device available?