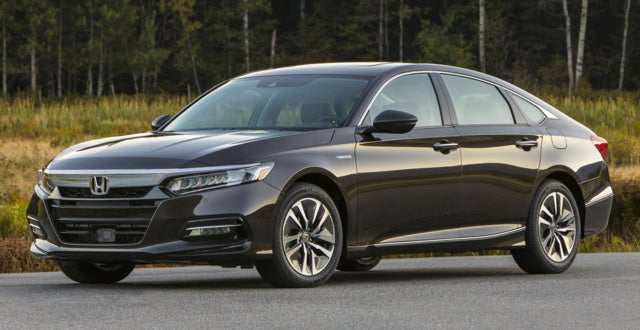 CarGurus has 4,524 nationwide Accord Hybrid listings starting at $3,995.

Average user score
3 ⁄ 5 stars
Based on 6 reviews
Review by Guru94JRMN — Glad I took it for a test drive. It’s definitely not the car for me. Too long of a hood made it impossible for me to see or judge distance in front of me. Read more

The Honda Accord Hybrid has ducked in and out of the market over the last ten years, originally as a performance flagship for the nameplate and later as one of the most efficient family cars on the market. For 2018, the hybrid moves over to the tenth-generation body.

Improvements to the Accord Hybrid’s design, comfort, and space utilization come by way of a new body shared with the non-hybrid Accord. That means there’s a clean front fascia with a blunt brow, an elongated hood, and lines that all gently curve and taper to the vehicle’s tail for a fastback look. Hybrid badges on the fenders and decklid and the absence of an exposed tailpipe differentiate the hybrid from its gasoline counterpart. Inside, things are identical; although, the Hybrid borrows the push-button gear selector from the premium 10-speed-equipped gas-only Accord. And, thanks to a much smaller power unit mounted in the rear floor, the new hybrid includes a 60/40 split folding seat—a feature missing from the 2017 model—for 16.7 cubic feet of total space with the seats folded.

Powertrain-wise, the Accord Hybrid gets the latest generation of Honda’s hybrid technology. A high-efficiency Atkinson-cycle 2.0-liter inline 4-cylinder and electric motor put out 212 horsepower and 232 pound-feet of torque. As with the previous version, Honda’s system negates the need for a transmission as power is sent directly from the motors to the front wheels. Fuel economy is rated at 47 miles per gallon across the board, about the same as the old model.

There are three drive modes for the Accord Hybrid that drivers can select at will. In normal operation, the car remains in Hybrid Drive mode, which uses the gasoline engine and electric motor together in the most efficient possible way. In Engine Drive mode, the car uses the gasoline engine exclusively, also charging the battery to full state. And, in EV Drive mode, the Accord Hybrid uses just the battery and electric motor, only switching to the engine when battery state or power demands require it. Another new driving feature is a set of paddles mounted where traditional paddle shifters would be that allows drivers to toggle between four progressive modes of regenerative braking.

The Accord Hybrid adds two new trims, EX and EX-L Navi, to the previously-offered Base, EX-L, and Touring trims for a wider spread. Base starts at $25,100. Standard features on Base include 17-inch alloy wheels, LED low-beam headlights, LED taillights, dual-zone climate control, keyless access and start, and a 7-inch color instrument panel LCD. Options are about the same as the non-Hybrid and include leather upholstery, full LED headlights, and a bigger infotainment system with Apple CarPlay and Android Auto compatibility.

In addition to a standard reversing camera, Honda bundles the Accord Hybrid with its full Honda Sensing suite of technology that incorporates adaptive cruise control, a traffic crawl function, forward collision warning, automatic emergency braking, lane departure warning, lane-keep assist, and traffic sign recognition. Blind-spot monitoring is an option. The hybrid model has not been specifically crash-tested, but the gasoline-only 2018 Accord has. The Insurance Institute for Highway Safety (IIHS) gave it excellent ratings in every category and a Top Safety Pick designation.

The 2018 Accord Hybrid joins the 2019 Insight and the entire Clarity range in a long-list of environmentally and resource-conscious models from Honda. With measurable improvements to its drivability and space, not to mention a lower starting price, it is a solid choice for anyone shopping in this segment. Honda begins delivering Accord Hybrids to dealers in late March 2018.

What's your take on the 2018 Honda Accord Hybrid?

Scullen54 We test drove this car. It was awesom. It drove very quiet, and had a lot of leg room in the back. For an economical car, it drove like a luxury car - probably going to buy this one.

Users ranked 2018 Honda Accord Hybrid against other cars which they drove/owned. Each ranking was based on 9 categories. Here is the summary of top rankings.

Have you driven a 2018 Honda Accord Hybrid?
Rank This Car

Cars compared to 2018 Honda Accord Hybrid

CarGurus has 4,524 nationwide Accord Hybrid listings starting at $3,995.

How Is A Car Delivered From Out Of State?

Rattling Noise Passenger Side While Driving At Highway Speeds

Have a 2018 Honda Accord Hybrid that I just purchased less than a month ago, the car had under 23k miles on it. Was driving back home from Orlando when the car started rattling very annoyingly. I ...

Since the start of the cold weather below -15C the remote of the car does not work , the engine will start for 3 second and cut , I go in and press the button and all is fine.It look like when the b...

My 2018 Honda Accord Radio Blacks Out

18 views with 4 answers (last answer about a year ago)

Should The 2018 Honda Accord Hybrid Ev Be Usable With A Cold Engine?

I just purchased a 2018 but EV has failed to engage on a few occations already! From a cold start it has failed daily and once the computer said the engine was too cold after a 35 minute drive. NO e...

140 views with 5 answers (last answer about a year ago)

2018 Honda Accord Hybrid Trims For Sale