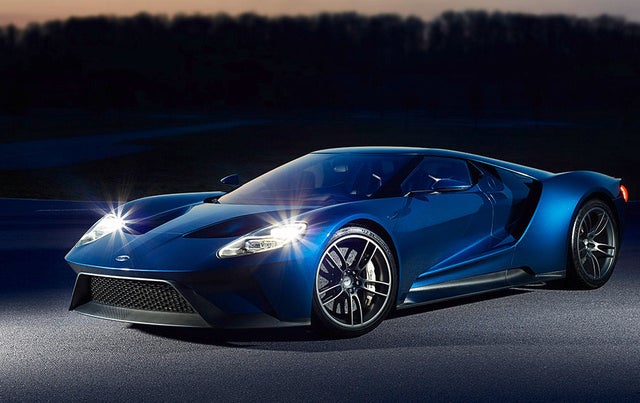 The latest Ford GT took the motorsport world by storm when it was unveiled during the 2015 North American International Auto Show. No one outside of Ford had a clue the vehicle was under development. Looking every bit like a road-going race car, it immediately stood out within the supercar segment as something new. For 2018, its second year, it continues as before.

This GT makes a clean break, visually, from the rest of the series—including the original GT40 of the 60s and the mid-2000s that followed it. The body is a work of art. Every scoop, flap, wing, valley, and intake of its teardrop shape lends itself to both form and function. Details like the aggressive rear buttresses and high-mounted exhaust outlets give it a distinct character. And the entire thing is crafted of carbon fiber.

Inside, it’s much the same story. Ford makes use of a number of
geometrically-shaped panels to create an interior that is beautifully utilitarian. Much like the race car version, the GT provides functions contained within the steering wheel assembly. The two seats are as close to race-car spec as found in a consumer car, and everything is designed to save weight while delivering the high quality befitting supercar status.

For the engine, Ford turned to its EcoBoost family. There’s a compact turbocharged 3.5-liter V6 unit with a remarkable 647 horsepower and 550 pound-feet of torque on tap, peaking at 6,250 rpm and 5,900 rpm, respectively. This engine shares most of its parts with that of another Ford performance vehicle, the F-150 Raptor. The 7-speed dual-clutch automatic transmission is mounted at the rear of the car forming a transaxle, and it includes paddle shifters that drivers are encouraged to use. All in, the GT can reach a top speed of 216 mph. While there’s no official zero-to-sixty figure, media outlets have reported test times of around 3 seconds.

The GT also gets a hydraulic suspension that changes the ride height by 50 millimeters, from Normal to Track mode and back again. This feature can be activated at will up to 25 mph to clear speed bumps and driveways. There’s also a track mode for the entire car, which changes parameters for the engine tuning, braking, steering, and stability control.

As far as features, Ford uses technology and electronics to its advantage. The full LCD high-resolution instrument cluster is lighter weight than a traditional gauge-based one and relays helpful information to the driver about the car’s vitals and performance. The LED headlights are lighter weight than HID units. There’s a version of Ford’s SYNC3 system in the center of the dashboard, too. Air conditioning and power windows, locks, and mirrors are standard. Much like a race car, the GT’s seats do not move, but the steering wheel and pedal box can be adjusted for a comfortable driving position.

The GT is easily the fastest and highest-performance vehicle ever to come from Ford. Not to mention, it’s quite a looker. But, all of that comes at a cost—nearly $450,000 to start. If that isn’t a deterrent, Ford’s selling model may be. There will be a limit of 250 units per year, and Ford is being selective about who is allowed to buy the car, preferring buyers who will advance the reputation of its performance arm.