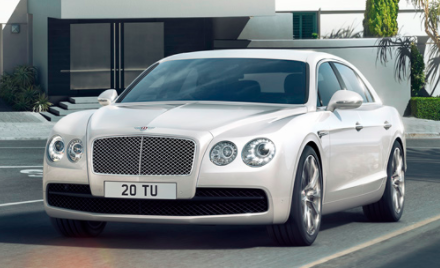 The Flying Spur is still heavily based on the two-door Continental GT and sees few updates for 2018. The big addition for 2017 was a new V8 S model that came with improved handling and black exterior treatments.

The Flying Spur’s stately hood hides one of two available V8 engines. The base model borrows a turbocharged 4.0-liter 8-cylinder from Audi that’s tuned to 500 horsepower and 487 pound-feet of torque, with power sent to all four wheels. The Flying Spur is a substantial 5,300 pounds of hand-built extravagance, but it accelerates from 0-60 miles per hour in 4.9 seconds and has a top speed of 183 mph. The new-for-2017 V8 S model raised the stakes with 521 hp and 502 lb.-ft of torque from the same twin-turbo 8-cylinder engine. This is enough to drop the 0-60 time to 4.6 seconds and raise the top speed to 190 mph.

With a timeless design, Bentley continues to offer a status symbol with the Flying Spur. The base cars start at under $200,000, but irresistible options on higher trims can push price into $300,000 territory.

What's your take on the 2018 Bentley Flying Spur?

Have you driven a 2018 Bentley Flying Spur?
Rank This Car