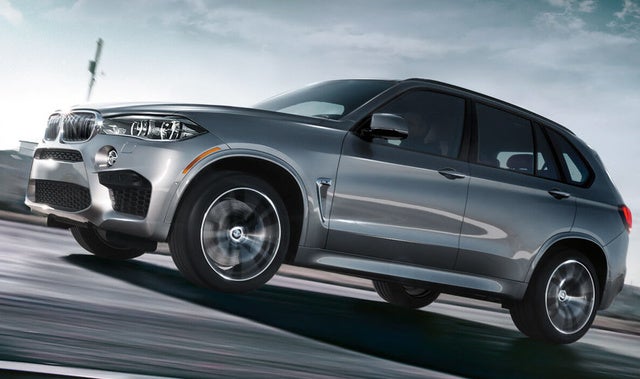 The X5 is BMW’s midsize crossover offering, typically seen in suburbia shuttling groceries and kids. For 2010, however, BMW made an interesting move in introducing the X5 M, meaning that the M badge was no longer found exclusively on the company’s high-performance coupes and sedans. The X5 M is worthy of that badge, though, as it offers blistering performance in a straight line and impressive roadholding, all at a price that’s a lot cheaper than a Porsche Cayenne Turbo S, even if it does set buyers back six figures. The current version of the X5 M only just came out for 2015, and for 2018 there aren’t any major changes expected. To distinguish it from the regular X5, the M version is more aggressively styled, rides on 21-inch forged alloy wheels, and has the M logo prominently displayed in several spots.

The X5 M’s 4.4-liter V8 is twin-turbocharged and rated at 567 hp and 553 lb-ft of torque, and that kind of grunt driving all four wheels will scoot the two-and-a-half-ton SUV from 0-60 mph in the low-4-second range, low 12s in the quarter-mile, and on to a quoted top speed of 160 mph. Like most of the rest of BMW’s lineup, the X5 M does feature stop-start ignition, but that doesn’t do much to improve its unremarkable 14 mpg city, 19 highway, 16 combined rating. The X5 M is a savage performer capable of supercar levels of acceleration, but value-minded buyers might want to pay the X5 xDrive50i model a look. It has a similar 4.4-liter twin-turbo V8 that's rated at 445 hp and 480 lb-ft of torque, and while that’s significantly less than the M version offers, it still makes for a very quick automobile, and the xDrive50i costs 25-30 grand less.

For some, though, only the best will do, and the X5 M does sit head and shoulders above the rest of the range in terms of driving dynamics. It has its own track-tuned suspension, heftier steering, and beefier brakes. Despite being a relatively tall all-wheel-drive (AWD) vehicle, it has been almost universally praised for being surprisingly quick on its feet and flat in the corners.

Like the rest of the lineup of BMW’s M vehicles, the 2018 X5 M serves the dual purpose of luxury and comfort along with savage performance. It comes standard with well-bolstered sports seats. Standard equipment includes a first-and-second-row sliding and tilting sunroof, dual-zone automatic climate control with separate controls for the air conditioning in the rear, heated front seats, heated mirrors, rain-sensing windshield wipers, an integrated navigation system, and of course the latest version of BMW’s iDrive system with a 10.2-inch high-resolution glass screen. Optional extras include a better Bang & Olufsen stereo, Apple CarPlay, head-up display, and several active safety features.

The X5 hasn’t gone through all the tests usually conducted by the Insurance Institute for Highway Safety (IIHS), but in the handful it has taken part in, it's gotten top Good scores, while in federal National Highway Traffic Safety Administration (NHTSA) testing it has gotten 5 stars overall. All X5 models now come standard with a reversing camera, but unfortunately many of the cutting-edge safety features BMW employs are available only as optional extras. These include BMW’s Parking Assist and Traffic Jam Assistant.

The X5 M isn’t really necessary, but that’s kind of the point with BMW's sporty SUVs. They make a statement, and they have the potential for serious speed even if they are never driven at ten-tenths. It’s far and away the most expensive piece of the X5 lineup, but it is also leaps and bounds ahead of everything else in terms of performance. And compared to other luxury SUVs that will outrun many sports cars and still carry a family of five with some luggage, it’s actually not a bad value.

GuruZ1488 Wow! This thing is unbelievable! It kind of reminds me of a highly modifying lawn tractor, it serves a purpose like mowing the lawn but you can’t mow at 100+ mph you can just brag about how fast it is to your gear head neighbor who is foaming at the mouth wishing it was his. But his wife is like hell no are you crazy ? I’m trying to convince myself that this is the car for me to make more room in the garage & serve all of what a car does for me. Why don’t the make a M wagon? Just saying a m5 all wheel wagon might be better? That seems more usable to me. I’m currently driving a 328d wagon and have a e92 m3 for nice days , weekends as well as the occasional track day . But I cannot see myself taking a 21/2 ton suv to the track where you could use all the power and handling.’This will smoke my m3 in every measurable way. That’s crazy? (except sound and weight ) but where do you use it? You can’t pick the kids up and drag race corvettes stop light to stop light with them or groceries in the back. It just doesn’t make sense to me. Maybe that’s the point! But It’s cool and I think I want one. But I’m not sold yet!

I purchased a new 2019 BMW X5 m 2 months ago. The check engine light is already showing up. What could be the cause?

Why Does CarGurus Text Search Not Work At All?

How come Text Search which is a basic feature does not work on CarGurus? It works perfectly on Autotrader which has some of the same cars for sale but not all. It seems like a basic feature, Google ...

What Makes A Fair Deal A Great Deal On Pricing?

a car that's listed as a fair deal, at what price point does it become a great deal?