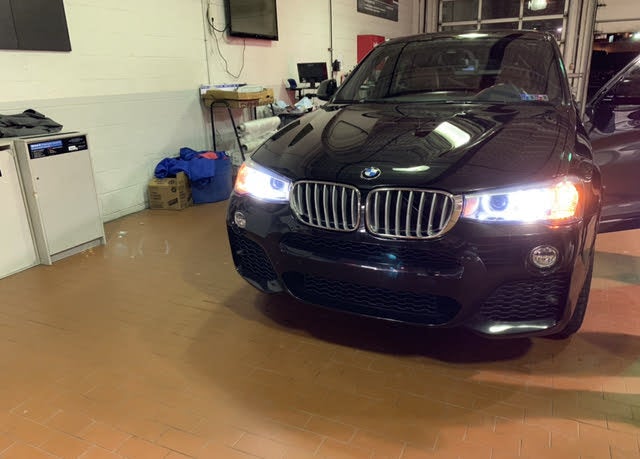 How would you describe the BMW X4? A 4-door coupe on stilts? A tall wagon with a sleek roof? The X4 follows in the footsteps of the X6 by taking an existing SUV—in this case, the X3—and shaving off a fair amount of the roof. The end result is a unique and polarizing SUV that stands out from the growing crowd of compact luxury SUVs. The only change of note for 2018 is a restructuring of the option packages into a tier system. For instance, if you want the second-tier Premium package, you’ll need to unlock it by ordering the first-tier Convenience or M Sport package. The 2018 X4 will be offered in base xDrive28i and performance M40i trims.

The front end of the X4 is the same as the X3, with large twin kidney grilles and a pair of xenon headlights with LED daytime running lights. The M Sport package, which is standard on the M40i trim and optional on the XDrive28i, amps up the aggression with a body kit, window trim, 20-inch wheels, and an M steering wheel.

The sleek styling of the X4 does carry some hefty penalties, however. Cargo space is quite small for the class, with just 17.7 cubic feet behind the rear seats and 49.4 cubic feet with the seats folded. By comparison, the X3 offers 27.6 cubic feet behind the rear seats and a total of 63.3 cubic feet when the seats are folded. While the driver and front passenger have ample head- and legroom, rear-seat passengers must contend with the seat cushions being mounted uncomfortably low and a limited amount of headroom due to the sloping roof. If you want the sleek looks of the X4 but aren’t willing to sacrifice passenger comfort, you might want to consider the Mercedes-Benz GLC-Class Coupe.

Inside the X4’s cabin, the driver and passenger seats are 8-way power adjustable and the dashboard is well-organized, with all controls within easy reach. BMW’s iDrive system with a 6.5-inch screen comes standard, while an optional navigation system adds a larger 8.8-inch screen and touchpad controller. There is a learning curve to using iDrive, as it takes a few extra steps to perform certain functions, but it becomes second nature once you get the hang of it.

Most X4s will wear a xDrive28i badge, which means that a turbocharged 2.0-liter 4-cylinder engine good for 240 hp and 260 lb-ft of torque sits under the hood. If you’re looking for more power, the M40i packs a turbocharged 3.0-liter inline 6-cylinder engine with 355 hp and 343 lb-ft. Both powertrains come paired with an 8-speed automatic transmission and BMW’s xDrive all-wheel-drive (AWD) system. Reviewers note that the xDrive28i is perfect for most buyers, as it packs more than enough power for the daily drive, while speed demons will be thoroughly impressed with the M40i. With a 0-to-60 time of 4.7 seconds, it leaves even some sports cars in the dust. Fuel-economy figures stand at 20 mpg city, 28 highway, and 23 combined for the xDrive28i and 18, 25, and 21 for the M40i.

The X4’s handling is a bit of a mixed bag, depending on the model and features. The xDrive28i has slightly softer feel, which allows for a little bit more body roll when cornering, although opting for the M Sport Package will add a stiffer suspension setup for improved handling. The M40i, on the other hand, is a surprising vehicle right out of the box, with quick steering and little body motion. It can give the likes of the Porsche Macan or Jaguar F-Pace a run for their money on curvy roads. For daily driving, the 28i is the better choice, as its softer suspension setup allows it to smooth over bumps better than the M40i. An adaptive damper system, which automatically adjusts the firmness of the shocks, is available as an option for both models.

In terms of safety features, all X4s come with anti-lock brakes (ABS), traction and stability control, front and rear parking sensors, a reversing camera, a full set of airbags, and BMW’s Assist eCall telematics system. Options include a surround-view camera system, blind-spot monitoring, forward-collision warning with automatic braking, parking assist, and adaptive cruise control. The X4 has not yet been crash tested by either the Insurance Institute for Highway Safety (IIHS) or the National Highway Traffic Safety Administration (NHTSA).

GuruW4BNN It's a game changer in the same old SUV arena. Yes, the Maserati looks great and so does the new Alfa, but they don't look as good when they spend most of their time in the service bay. You can drive the X4 for many many carefree miles, with style.

How Do I Buy A Car In One State And Register It In Another State?

is the tax paid in the state it is sold in or state registered in?