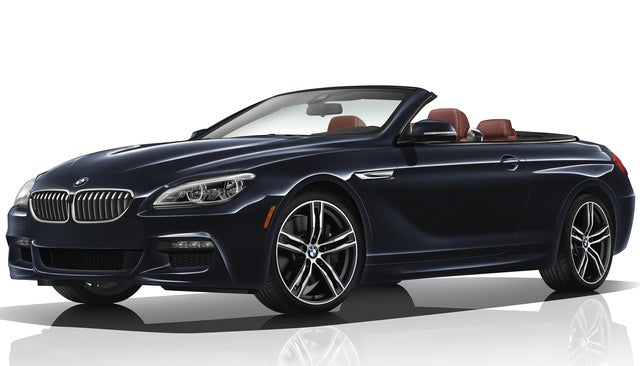 BMW’s 6 Series luxury grand tourer (GT) was first produced in the 1970s and 1980s. Then there was a long absence until production started up again in 2003, and the current generation has been around since 2011. BMW has been at something of a crossroads with the 6 Series, and it looks as if the model will be replaced for 2019 with another name from the past—the 8 Series. Nevertheless, the company has made a few notable changes for 2018 model year. The exterior comes in a new Sonic Blue color, and the M Sport package now offers new bi-color 20-inch M wheels and carbon-fiber trim lifted from the more hardcore M6. The 2018 6 Series is available in the 640i and 650i trims as a convertible or longer 4-door Gran Coupe and in the luxurious Alpina B6 Gran Coupe trim. The base 640i Gran Coupe starts at just under $80,000, but more loaded models run well into 6-figure territory.

The 6 Series base 640i trim is outfitted with a turbocharged 3.0-liter inline 6-cylinder engine mated to an 8-speed automatic transmission and good for 315 hp and 330 lb-ft of torque. The 640i Gran Coupe can reach 60 mph in a rather quick 5.2 seconds, while the equivalent Convertible variant won’t be too far behind. The 640i will get fuel-economy numbers of 20 mpg city, 29 highway, and 23 combined with rear-wheel drive (RWD) and 19, 28, and 22 with xDrive all-wheel drive (AWD).

While more GT than sports car thanks to its high curb weight, the 6 Series is nevertheless a competent machine on corners, and drivers can choose between Comfort, Sport, and Sport+ settings for adjustments to the steering feel, throttle response, shift timing, and suspension. An available Adaptive Drive system further reduces body roll, and the M Sport Edition package adds 19-inch double-spoke wheels and an aero body kit.

As one would expect, the 6 Series’ interior boasts plenty of comfort and enough high-tech bits to go around. While rear-seat room is tight in the 2-door Convertible, the 4-door Gran Coupe makes good use of its 4.5-inch-longer wheelbase. The Convertible model comes with a folding fabric roof, which is surprising in today’s world of metal hardtops, but it also means it takes up less room when it’s stowed. The top can be raised or lowered in 20 seconds and at speeds up to 25 mph.

As for interior equipment, even the 6 Series’ base 640i trim gets 10-way power-adjustable front seats, wood interior trim, a reversing camera, navigation, a Wi-Fi hotspot, and a 10.2-inch touchscreen with the latest iDrive infotainment system. iDrive houses the navigation system, 3D maps, a 200GB hard drive, and over-the-air map updates. An Executive package adds comfort items like soft-closing automatic doors and front ventilated seats, while the M Sport Edition package adds the same plus an M steering wheel and ceramic controls. A Bang & Olufsen sound system, Apple CarPlay, and a unique wood-inlay steering wheel are other available options.

BMW is an industry leader when it comes to safety, and upper models like the 6 Series are bristling with cutting-edge technology. The 2018 6 Series comes standard with an Active Protection System that pretensions the seat belts, closes the windows, and activates post-collision braking when it determines a collision is imminent. Also standard is an impact sensor system that automatically disconnects the alternator, fuel pump, and starter to prevent a fire; turns on the vehicle’s hazards and interior lights; and unlocks the doors. Other high-tech standard safety features include adaptive cruise control, adaptive brakelights and LED headlights, BMW’s Assist eCall with an SOS button to contact emergency services, and BMW’s Remote Services with a remote door-unlock feature and the My BMW smartphone app. Even with all of this, there are optional extras like lane-departure warning, pedestrian protection, city collision mitigation, active blind-spot detection, and a surround-view camera system.

GuruC9JHQ Sorry to make some corrections here about the top-of-the-line Alpina B6 model. Instead of the regular 445 hp, it features a stunning 600 hp engine, upgraded 8-speed transmission, unlimited 200 mph, an unrivaled leather upgrade compared to the regular BMW leathers, and the fact that worldwide, only 1100 cars of this models have been produced-ever. Expect those Alpina models to be collectors items soon, as the successor 8-series has less power, less/no space in the rear and the 7 isn’t really that pretty anymore.

Users ranked 2018 BMW 6 Series against other cars which they drove/owned. Each ranking was based on 9 categories. Here is the summary of top rankings.