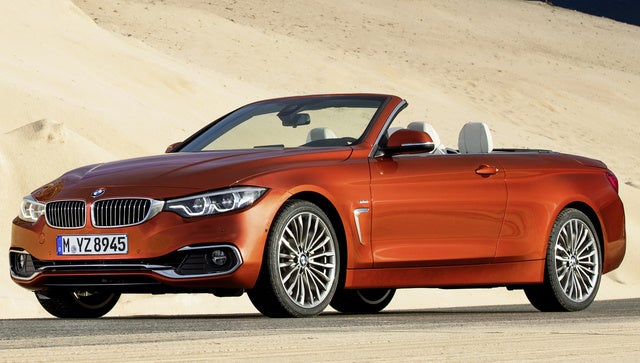 The 4 Series is BMW’s compact executive coupe, made with a sportier attitude than the more utilitarian 4-door 3 Series. Refreshed for 2018, the BMW 4 Series gains some steering and suspension enhancements for an improved ride and handling, new wheel designs, and two new exterior colors: Sunset Orange Metallic and an eye-catching Snapper Rocks Blue Metallic. Other changes for 2018 include standard bi-LED headlights in place of the old xenon ones, revised taillights, and an updated rear bumper and diffuser. LED fog lights are now standard, with optional adaptive headlights. The 4 Series remains available as a coupe, convertible, or Gran Coupe (a 4-door coupe with a liftback rear). The 4 Series effectively replaced the 2-door 3 Series, so it was only natural that it would make a highly popular volume model. Between its debut in 2014 and the end of 2016, the 4 Series has sold nearly 400,000 models.

The 2018 4 Series comes in two trims—430i and 440i—for each body style, and all models are available with either rear-wheel drive (RWD) or BMW’s xDrive all-wheel-drive (AWD) system. The 430i trim gets a turbocharged 2.0-liter 4-cylinder engine that makes 248 hp and 258 lb-ft of torque, while the 440i receives a turbo 3.0-liter 6-cylinder engine good for 320 hp and 330 lb-ft. All variants come standard with an 8-speed automatic transmission, while the coupe will make driving enthusiasts happy with an available 6-speed manual transmission.

For 2018, BMW has tweaked the 4 Series’ suspension and electric power steering, and available upgrades include an M Sport suspension and an adaptive M-branded suspension with variable damping. A performance-focused Track Handling package offers larger brakes, stickier tires, and the adaptive M suspension. More serious drivers will want to opt for the M4, but a well-optioned standard 4 Series will still be more than enough for some driving fun.

Changes to the interior of the 2018 4 Series are fairly minimal. A sports steering wheel, a glossy black plastic center console, and double stitching on the instrument panel are standard, and options include several new color schemes and wireless device charging. Additionally, the available navigation system now features a more user-friendly interface with tile-style icons.

Two-door versions of the 4 Series aren’t the most practical cars when it comes to space for rear seat passengers or cargo, and this issue is exacerbated with the convertible, which stows its folding hardtop in the trunk. With the top down, the convertible offers just 7.8 cubic feet of trunk space.

While most of the 4 Series’ appealing safety features cost extra, there are nevertheless plenty of options. A reversing camera does come standard, and available items include automatic emergency braking, a park-distance system, surround-view cameras, and blind-spot monitoring with lane-departure warning and collision-warning, and active cruise control. An optional automatic collision-notification system will contact emergency responders in the event of an accident. Additionally, the similarly constructed 3 Series received the coveted Top Safety Pick+ status from the Insurance Institute for Highway Safety (IIHS) in 2017, and we expect the 4 Series to be an equally solid choice for the safety-conscious.

TheHorror BMW really feels like it is lacking in inspiration these days.

Users ranked 2018 BMW 4 Series against other cars which they drove/owned. Each ranking was based on 9 categories. Here is the summary of top rankings.

BMW To Your Showroom From The Jamaica Pace?

Can you get this car WBA4Z3C52JEC57729 BMW to your showroom from the Jamaica pace?I'd like to see it this week. It will save me a few miles driving.. Phil Reply to Yawker@aol.com please

What Percentage Cost Does CarGurus Get If I Sell Thru You

What percentage do you request if I sell through you

How Do I Report An Accident On A Car I'm Selling?

BMW Void Factory Warranty On A 2 Year Old 430I

102 views with 3 answers (last answer about a year ago)

How can I get the amount of my trade in to the price of the BMW?