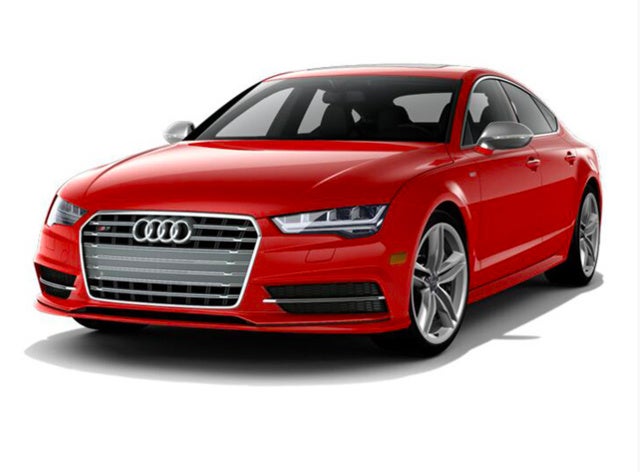 A sportier “S” version of the Audi A7, the S7, delivers the thrust of a twin-turbo V8 and better driving dynamics than the A7. The S7 is similar to its S6 cousin, with the only big difference being its sloping roofline. The S7 is the more exclusive of the two, however, as its $81,000 base price is nearly $10,000 more than a base S6. For 2018, the only major changes to the S7 are new wheels.

Compared to the regular A7, which has more than enough power to work with thanks to its supercharged 6-cylinder, the S7 takes things up a few levels with the twin-turbo 8-cylinder. Displacing 4.0 liters, it is rated at 450 horsepower and 406 pound-feet of torque, driving all four wheels with Audi’s Quattro system through an 8-speed automatic transmission with paddle shifters. The S7 has a start/stop ignition system, ideal for boosting fuel efficiency, but sipping premium gas it is predictably thirsty, getting 16 mpg city, 24 highway, and 18 combined.

The S7 won’t deceive drivers into thinking it’s anything other than a large sedan, but its handling has been praised for being more sharp and would be great on twisty back roads. Adaptive dampers are available to make driving even more interesting. Other available handling extras include Audi’s dynamic steering and a sport rear differential with torque vectoring to give drivers more control and stability when on winding roads.

Although it’s derived from the well-appointed A7, the S7 rewards drivers for the extra money with better interior trims and finishes, including plenty of quilted leather and wood—and an available eye-catching red interior with carbon-twill inlays. That attractive sloping roofline cuts down slightly on headroom for the rear passengers but makes up for it by offering impressive cargo room. Audi’s Multi Media Interface (MMI) infotainment system is included and features touchpad controls as well as a Wi-Fi hotspot. A head-up display is also standard in 2018.

Even with its distinctive Sportback profile, the speed it’s capable of, and the kind of luxury it offers the S7 is decidedly understated. Drivers can dress things up a little bit with a Black Optic package that adds 20-inch wheels and gloss-black trim, but this super sedan still isn’t flashy.