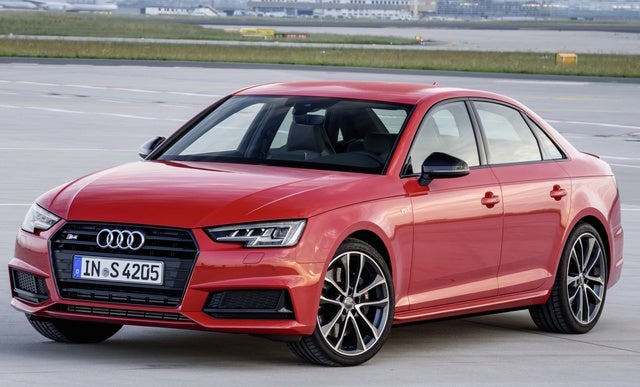 Audi’s S4, the hotter performance version of the ever-popular A4 sedan, gets some under-the-hood updates and cosmetic tweaks for 2018. Notably, a new turbo V6 engine replaces the old supercharged unit, and exterior changes include new full-LED headlights. The S4 can be distinguished from its more mundane A4 counterpart by its bold 18-inch double-spoke wheels, quad exhaust tips, trunk-lid spoiler, and the small red badges found on all of Audi’s S-range models. Pricing for the 2018 Audi S4 will start at $50,900.

The biggest update to the 2018 S4 is the engine—it’s still powered by a 3.0-liter V6, but this one is twin-scroll turbocharged rather than supercharged, as Audi goes the way of most major manufacturers in embracing turbos. This new unit makes 354 hp and 369 lb-ft of torque, which is 21 hp and 44 lb-ft more than the old motor, and boasts a very impressive 0-to-60 time of 4.4 seconds, several tenths of a second quicker than with the old engine. A new 8-speed automatic transmission replaces not only the old 7-speed dual-clutch automatic but also the 6-speed manual, a move that will disappoint some of the more serious driving enthusiasts in Audi’s customer base. Fuel-economy figures aren’t out yet, but it’s safe to assume that it will be more efficient than the old supercharged engine as well as more powerful.

Part of the appeal of the S4 and other Audis is that they look relatively unassuming but are quicker than most other cars on the road. From the outside, you would never guess that this compact luxury sedan can hit 60 mph as fast as the current crop of muscle cars and will rip through corners like a sports car. As usual, the 2018 model features Audi’s quattro all-wheel drive (AWD), with 60% of the power sent to the rear during normal driving—although up to 70% can go to the front wheels and 85% to the rear depending on the situation. An optional sport rear differential can also direct almost all available torque to the outside wheel for easier cornering.

The S4’s 5-link front suspension has been completely redesigned for 2018, and the entire platform sits almost 1 inch lower than that of the A4. An S Sport package adds active dampers and red brake calipers, and dynamic steering is also available. Comfort, Auto, Dynamic, and Individual driving modes let the driver adjust gear shift points, throttle response, steering weight, and damper settings for any driving style.

The S4’s interior displays the usual blend of sports and luxury, with a functional-looking flat-bottom steering wheel and seats that are not only well-bolstered but heated, power-adjustable, and massaging, as well. Also standard are auto-dimming, power-folding, heated rear-view mirrors; 3-zone automatic climate control; a sunroof; and Apple CarPlay and Android Auto. Options include an MMI touch interface with handwriting recognition, a Bang & Olufsen sound system, and an Audi virtual cockpit with navigation by Google Earth and a sport display mode with an adjusted gauge layout and a nifty lap timer. The higher Prestige trim receives a number of these optional features as standard, as well as a head-up display. The S4 comes with forward-collision warning with emergency braking and pedestrian detection, and available options include blind-spot warnings, adaptive cruise control with stop-and-go and rear cross-traffic alerts.

The performance potential of the 2018 S4, combined with the abundance of convenience features and the practicality of AWD, makes this one of the best all-around cars you can buy. You can take it to a track day, chauffeur work clients around, or drive through light snow, and the 2018 model’s significant power boost makes the S4 even more appealing.

JayveeDubya It looks amazing, especially on paper! I had a 2000 S4 and currently a 2013... The 2018 S4 appears to be the platform-tweak that boosts the car to the next level once again! These cars are always surprisingly fun to drive! The S4 model is the sweet spot of the brand! I'd