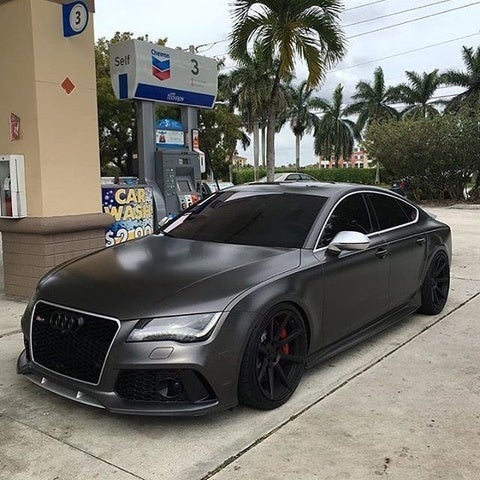 Looking for a Used RS 7 in your area?

To the everyday driver, the Audi RS 7 looks like little more than a nice German luxury car. It is based on the A7, after all, which indeed is a nice German luxury car. Not many would guess that the RS 7 midsize four-door has an absolute sledgehammer of an engine underneath its hood and that it will embarrass some proper sports cars, muscle cars, and even older exotics in between the stop lights, although it's probably most at home cruising at 150 mph on the Autobahn.

The RS 7 offers a ton of performance, but it comes at a price. The difference in cost between a standard A7 and the top-shelf RS 7 is almost enough to buy yourself a new Corvette. The 2018 RS 7 starts at under $114,000. And for those who want even more power, there is a recently introduced RS 7 Performance version that starts at a little over 130 grand. It comes with more power, carbon fiber trim on the front and rear, and black surrounds for the grille, windows, and exhaust tips. No major changes are due for the 2018 model year.

The standard RS 7 has more than enough power on its own, with 560 hp and 516 lb-ft of torque from its 4.0-liter twin turbo V8, which drives all four wheels through an 8-speed automatic transmission. The RS 7 Performance, meanwhile, comes with a tire-shredding 605 hp and 553 lb-ft of torque and will hit 60 mph in 3.6 seconds before going on to a top speed of 190 mph. It will even do the quarter-mile in 11.3 seconds. Those are insane numbers for just about any car, let alone a relatively unassuming four-door. Standard equipment on the Performance model also includes a dual-mode exhaust system. The EPA estimates the RS 7 will get 15 mpg city/25 highway.

At almost 4,500 pounds, the 2018 Audi RS 7 is a heavy car, but it’s not just a sled with a huge powerful motor and reportedly feels a lot lighter on its feet than the figures would suggest. It has several driving modes that adjust the ride from comfortable to sporty, and the RS 7 Performance comes standard with carbon-ceramic brakes and a Dynamic Ride Control suspension, which uses coil springs (instead of the air springs on the standard car) with three-mode adjustable dampers. The RS 7 Performance also can unleash most of its potential only if it is in the Dynamic driving mode. Otherwise, the engine is mapped for the same 560 hp settings of the standard car. In general, the RS 7 has been praised for flat cornering but criticized for a lack of feel in the steering and an unusually stiff ride.

Inside, the RS 7 features heavily bolstered front seats and a flat-bottom steering wheel. It also has carbon fiber inlays, aluminum pedals, heated power front seats, shift paddles, two USB ports, a 14-speaker Bose stereo, four-zone climate control, sunroof, navigation system, head-up display, 8.0-inch infotainment screen, Android Audio and Apple CarPlay compatibility, and a 7.0-inch instrument cluster. A Cold Weather package comes with a heated steering wheel and heated seats in the rear, while a Comfort Seating package adds ventilated and massaging functions to the front seats. A 15-speaker Bang & Olufsen stereo is also available. In the rear, there is plenty of space, but there is no center seat, restricting the carrying capacity to four people instead of the normal five. The RS 7 somewhat makes up for this with nearly 25 cubic feet of rear storage space, which is accessed through the power rear hatch. The Performance model is largely similar on the inside, but it does add blue inlays to the carbon fiber trim pieces as well as blue stitching on the seats.

Looking for a Used RS 7 in your area?