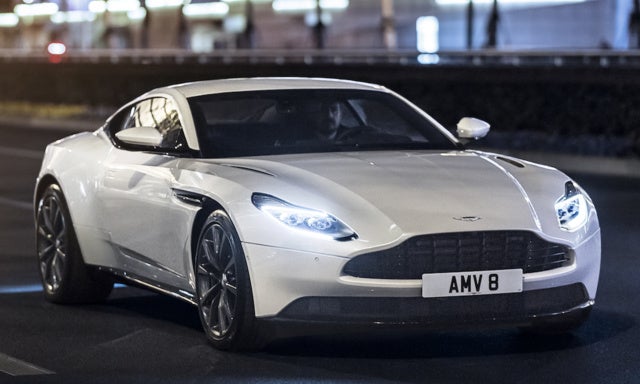 At the 2016 Geneva Motor Show, Aston Martin introduced the all-new 2017 DB11 model as a celebrated replacement for the old DB9. Since it’s an expensive and relatively low-production car, the DB11 goes into 2018 with similar looks and features, and the only major updates are under the skin, where buyers have new engines to choose from. The DB11 has the familiar and undeniably sexy Aston styling with the strakes behind the front wheels and the “floating” roof, competing with high-priced grand tourers like the Bentley Continental GT, Maserati GranTurismo, and the Ferrari GTC4 Lusso while being the best-looking of the bunch. The new V-8-powered DB11 starts at $198,995 while the V-12 starts at $216,495. The DB11 is also available as a convertible, which is called a “Volante” in Aston-speak.

When the DB11 debuted in 2017, it featured a naturally aspirated 6.0-liter V-12 engine. However, for this year’s model, Aston Martin offers a new V-12 as well as a V-8. The V-12 is a twin-turbocharged 5.2-liter unit that produces 600 horsepower and 516 lb-ft of torque, which goes from 0-60 mph in 3.9 seconds and reaches a top speed of 200 mph. The new V-8 engine surprisingly comes from Mercedes-AMG - not Aston Martin. Though the relationship between the two companies has slowly blossomed, AMG engines have only recently started to make their way into Aston Martin cars. This Mercedes-AMG V-8 is a twin-turbocharged that creates 503hp and 498 lb-ft of torque, and while it’s not technically as powerful or as scintillating to listen to, it still gets the Aston from 0-60 in 4.0 seconds and up to 187 mph. Both engines are mated to an 8-speed paddle-shifted gearbox by ZF, a German company. Aston presumably made the switch to a smaller-displacement turbocharged engine to save fuel, but no figures for the new V-12 or the V-8 are currently available. The 2017 DB11 managed 15 mpg city/21 highway/17 combined, so the new car should at least perform better than that.

Compared to the DB9 that it replaced, the DB11 is wider, lower, longer, and lighter. It also reportedly offers a smoother ride. As for handling, it’s still a relatively heavy car, but the new V-8 model takes some weight off of the front wheels and improves the way the car carves corners. Another notable feature is what Aston Martin calls the “AeroBlade,” which allows air to pass through inlets behind the windows and onto the tail to push the back of the car down.

The DB11’s cabin is a breath of fresh air as well. The interior is practically all leather, and even the headliner can be ordered in leather to replace the standard Alcantara. Standard luxury features include heated front seats with memory settings, keyless ignition, dual-zone automatic climate control, navigation, Bluetooth and satellite radio compatibility, and a WiFi hotspot. Optional extras include ventilated seats and premium audio, and DB11 buyers can configure their DB11’s interior with numerous colors and higher quality upholstery for a more bespoke feel. As it did in 2017, the DB11 borrows another item from Mercedes-Benz: the COMAND infotainment system.

The DB11 does not have any crash test ratings to go by, and it likely never will. It’s simply too expensive to test. Owners can take comfort in the fact that the 2018 DB11 comes standard with surround-view cameras and parking sensors for both the front and back. Other active safety features commonly found on luxury cars do not come on the DB11, but most DB11s won’t serve as daily drivers for most buyers.

The DB11 was a welcome replacement for the DB9, which was starting to become dated. With personalized colors available inside and out as well as the sense of exclusivity that both the price tag and the Aston Martin badge bring, the DB11 is a tempting choice for the well-heeled motorist and offers a fresher design than many of its competitors. The continued partnership with Mercedes-AMG in the form of a newly available twin-turbo V-8 is another exciting update, and it will be interesting to see what else the two luxury auto companies can cook up together.