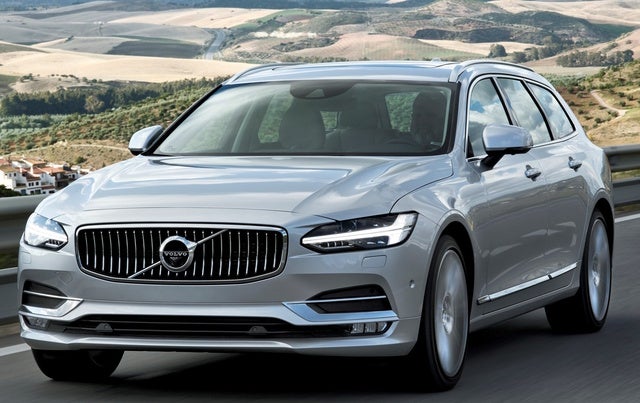 Looking for a Used V90 in your area?

Swedish automaker Volvo introduces yet another luxury family vehicle for 2017: the 5-seat V90. This midsize wagon, which had a brief run from 1997 to 1998, stands higher and looks sharper than its predecessor, and it now offers standard all-wheel drive (AWD) and a turbocharged and supercharged powerplant in its first trim—the Cross Country T6. The T5, the commuter/soccer-parent trim, will debut for the 2018 model year alongside the plug-in hybrid T8 trim. The V90 joins the XC90 crossover, introduced for 2016, and the brand-new S90 sedan in Volvo’s recently reconceived flagship “90” series.

The V90 Cross Country T6 trim packs a turbocharged and supercharged 2.0-liter inline 4-cylinder (I4) engine mated with an 8-speed shiftable automatic transmission for an output of 316 hp and 295 lb-ft of torque. This versatile wagon features 5 selectable driving modes: Comfort, Eco, Dynamic, Off-Road, and Individual, which allows you to make adjustments to a preset mode for your ideal cruising style. Estimated mileage figures for the I4 are 22 mpg city, 30 highway, and 25 combined, along with 3,500 pounds of towing capacity.

The V90 T5 trim will be available only with front-wheel drive (FWD) and is expected to carry the same turbo 2.0-liter I4 minus the supercharger, so performance numbers drop to 240 hp and 258 lb-ft under the handling of the 8-speed automatic transmission. The upcoming plug-in hybrid T8 trim carries Volvo’s Drive-E T8 Twin Engine gas/electric powerplant, which boasts the turbocharged and supercharged I4 of the Cross Country T6 trim paired with an electric motor for a combined output of 410 hp. Volvo claims the T8 will get up to 31 miles of all-electric driving from a fully charged battery pack.

Slated to go on sale in the Spring after rigorous testing in the fierce Scandinavian winter and the scorching deserts of southern Arizona, the V90 Cross Country T6 trim reflects Volvo’s determination to remain one of the few manufacturers still offering a premium wagon. The cabin, which closely resembles that of the high-end S90 sedan, is loaded with quality features like leather upholstery, a hands-free power liftgate, a panoramic sunroof, a 10-speaker audio system, a reversing camera, and rear parking sensors. This handsome hauler also comes with Volvo’s state-of-the-art Sensus Connect infotainment system with a 9.0-inch touchscreen and Apple CarPlay and Android Auto.

Standard safety features aboard the 2017 V90 Cross Country T6 reflect Volvo’s legendary commitment to passenger protection via its IntelliSafe technologies. Look for antilock brakes (ABS), traction and stability control, front side-mounted airbags, front and rear head-curtain airbags, and a driver’s side knee airbag. Adaptive cruise control is standard, as is City Safety technology, featuring forward-collision warnings with collision-mitigation braking, a safety feature the U.S. government says will be mandatory on all vehicles by 2022.

The Cross Country T6 trim comes with a semi-autonomous Pilot Assist system with radar- and camera-guided distance reading of lane markers and the vehicle in front, ensuring that drivers stay in their lane and maintain a safe distance behind traffic directly ahead. It works best in high-traffic situations at speeds below 30 mph. Also included is Volvo’s new Large Animal Detection feature, which uses automatic forward-collision-mitigation braking to avoid running into a road-wandering moose, caribou, or deer.

Looking for a Used V90 in your area?