Standard front and rear parking sensors, lane-departure warning and intervention, and auto high beams aim to up the value for this performance Volkswagen, but are the extra goodies worth its elevated price? 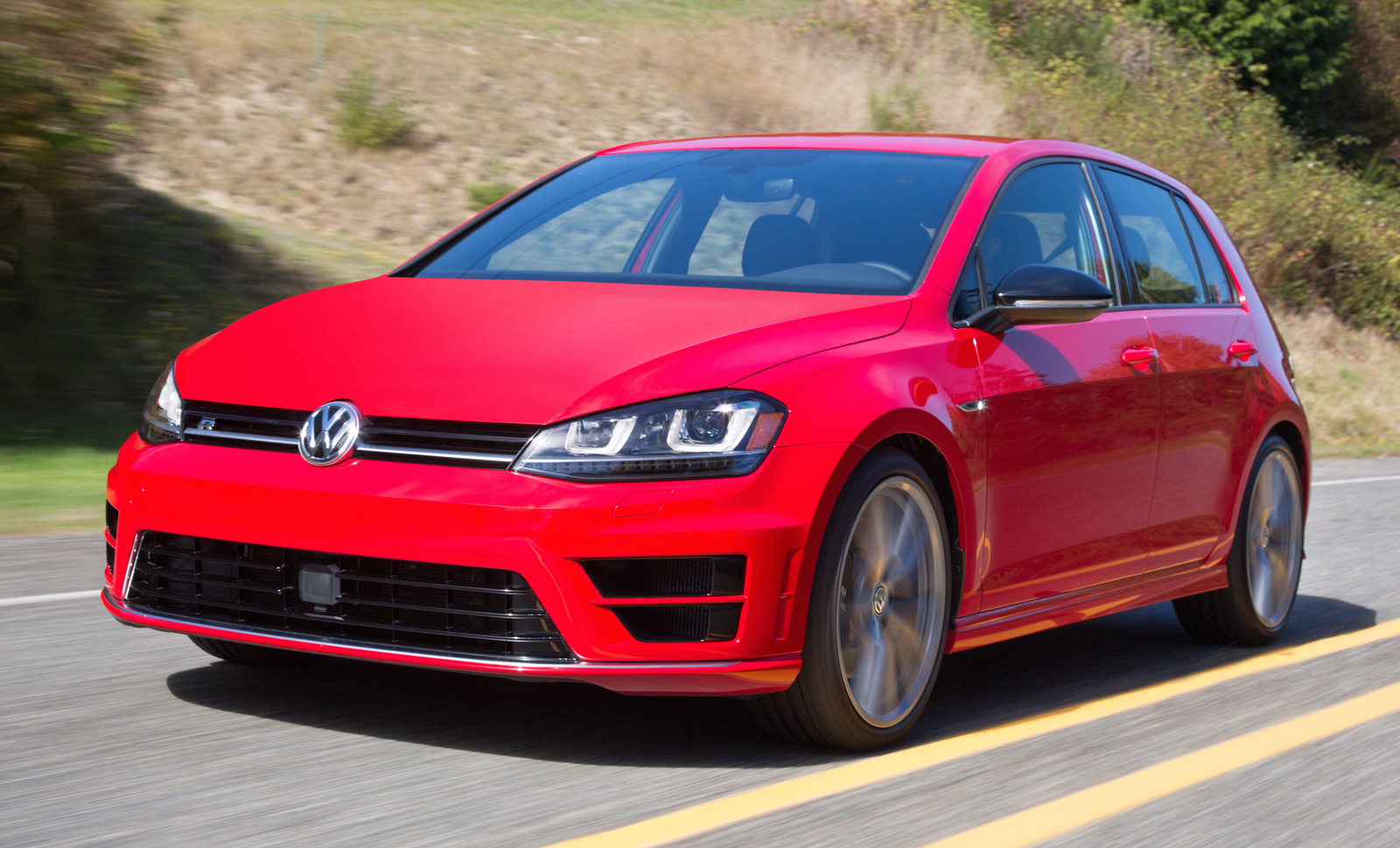 Earlier this year, you could get a “base” Golf R that came without the safety systems, navigation, or Dynamic Chassis Control for $37,575, but that was a very limited-release trim that’s been pushed aside for the most part. Now you have to accept all those features if you want a Golf R, and that means you’ll have to accept an elevated price as well: $41,295. The Golf has always been a do-nearly-anything entrant, and the Golf R only reinforces that image with all-wheel drive and a lot of extra power. Now with the added safety systems, navigation, and the dynamic suspension dampers, it truly offers the manic attitude of a canyon carver and the smooth power of a freeway cruiser all in one package. 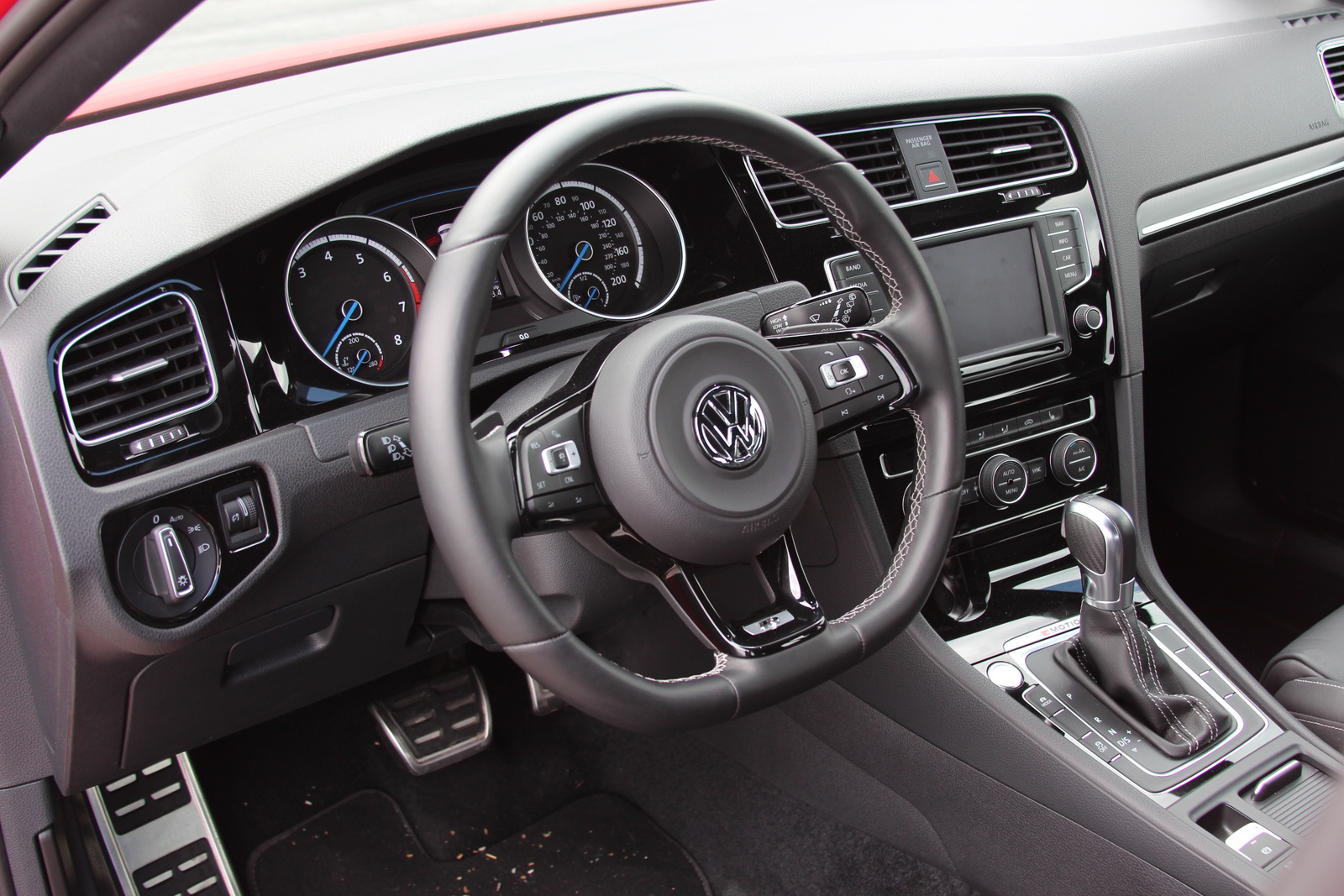 It’s sort of a Golf, right? In fact, that’s one of the major disagreements Golf R owners have had from the beginning. Half of them love the fact that their R is essentially a sleeper, nearly identical to a regular Golf or GTI for the uninitiated, while the other half froths at the idea that they’ve spent $40K on a car most people can’t distinguish from one that costs half as much.

Look closer and there are subtle differences in the grille and the aero treatment. But looks aren’t everything. It’s the feel that sets the R apart from its Golf stablemates. If the GTI is a hoot with 210 hp and 258 lb-ft of torque, the R is practically explosive with an extra 80+ horses and 20+ lb-ft. More than that, with AWD and dynamic dampers for the suspension, the R has more grip than you’ll be able to use on public roads. Switch it over to Comfort mode, and you’ve got a vehicle that’s just as capable of soaking up city potholes as highway seams. On top of all that, it’ll comfortably sit 4 adults and haul around 53 cubic feet of your stuff, although not at the same time.

My week with the Golf R was spent in a fully optioned Dynamic Chassis Control with Navigation trim in Tornado Red, and with the previously $895 Driver Assistance Package now standard, the $820 destination charge brought the total to $41,295. 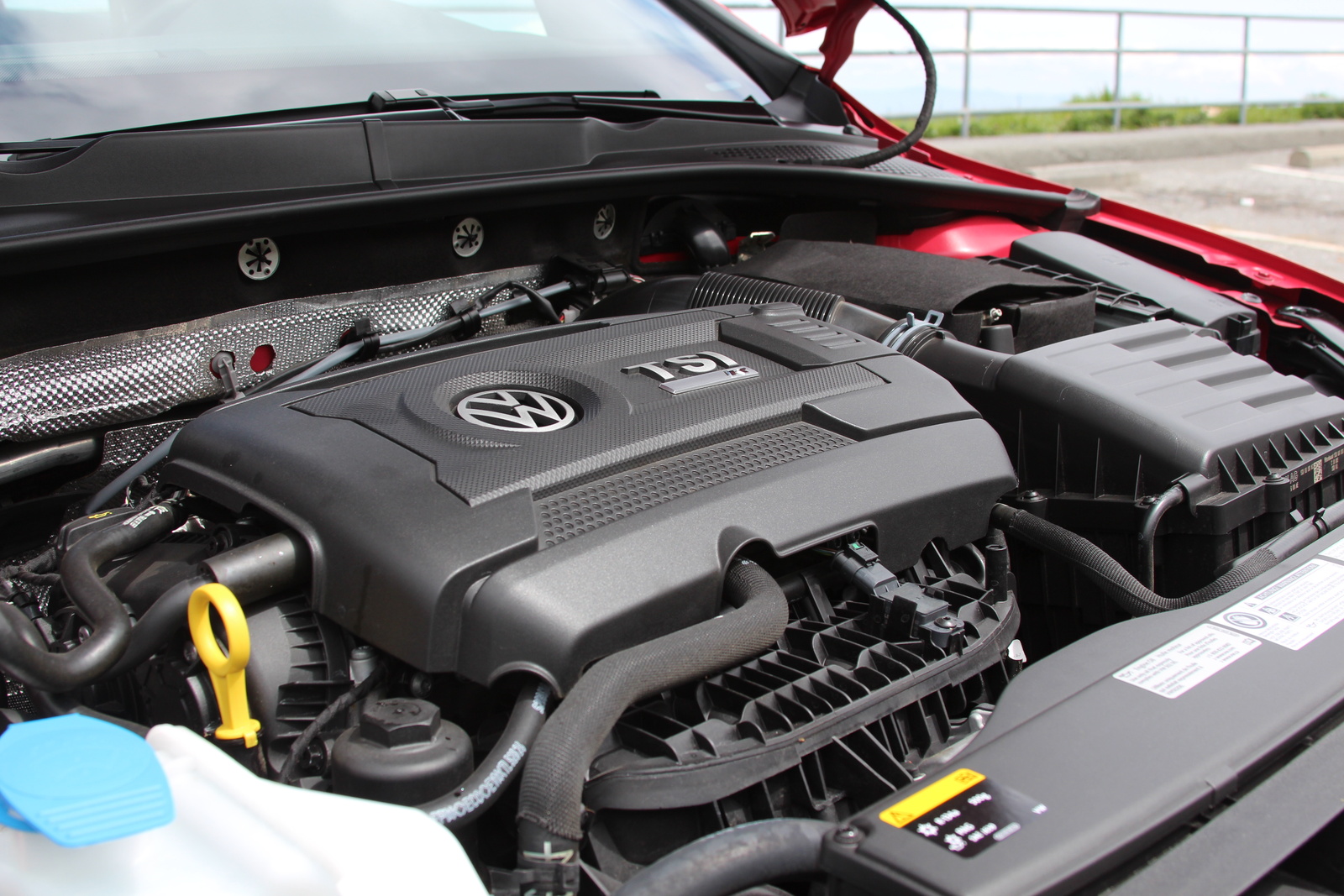 With an amped-up version of the 2-liter turbocharged engine found in the GTI, the R scoots with the kind of speed you’d expect from nearly 300 hp and lb-ft of torque, though it should be noted that its power arrives a little later than in the GTI. Sixty miles per hour can be achieved in just 4.6 seconds, with some turbo lag off idle as the torque curve announces itself at 1,800 rpm. You’ll live in all that torque until the turbo really spools, greeting you with explosive acceleration past 4,000 rpm and a whole chorus of sound and fury up to its 6,200-rpm redline.

With the manual, the Golf R is impressive. With the DSG dual-clutch transmission, it’s almost shocking how quickly shifts come and how much it’ll improve your time. Use the launch control, and you’ll understand why computers are faster than human hands and feet—you’re not going to get close to 4.6 seconds otherwise. That said, I’d still prefer the manual. A car like this is just aching for some human control, and the extra fun that’s to be squeezed out of the R with a stick should certainly be experienced. It’s more than an even trade for the time you gain on the sprint to 60 with the DSG.

That's not to disparage the DSG at all. It’s a smooth, smart, speedy little transmission that impresses every time I stomp on the pedal or click a paddle shifter. The only issue is the general juddering you can experience with a dual clutch if you’re not assertive with your acceleration. Crawling in stop-and-go traffic is not the DSG’s strong suit, although this one seems more composed than others I’ve driven. I’m just not sure the added expense and complexity of the DSG is worth the increased price. I suppose I’m just extra sensitive to each dollar spent when I’m driving around in a $40K Volkswagen.

But all of this ignores the best parts of the Golf R: its chassis and suspension. In “base” configuration with the standard suspension, the R is more car than most people can reliably handle on public roads. It’s tight and balanced, with enough feedback for enjoyment and enough grip that you’ll start worrying about peeling the tires from the wheels on particularly tight corners. Add Dynamic Chassis Control and the adaptive suspension dampers, and you’ll not only gain additional poise and confidence turn to turn, but you’ll be able to screw things down or loosen them up with a couple of button presses. Anyone who’s gone hunting for their perfect road knows that even when they’re not few, they’re often still far between. If you’re driving anything that even suggests a sport intention with regard to the suspension, that can mean a torturous experience as you slam over broken pavement and potholes. Here you can cruise up to your favorite canyons in Comfort mode and tighten things up with Sport or Race settings when you get to your destination.

And the brakes—oh lordy, the brakes! With summer tires, the R will come to a stop from 60 mph in just over 100 feet. I wish the 100-foot benchmark would become a more visible metric for auto manufacturers for both performance and safety, and when it’s achieved with the kind of poise and pleasant pedal feel you get in the R, that deserves special recognition.

Is any of this necessary? No more so than 300 hp or a dual-clutch transmission is necessary in a hatchback. But I suppose we should be thankful it’s available. This kind of fun always seems on the verge of disappearing. 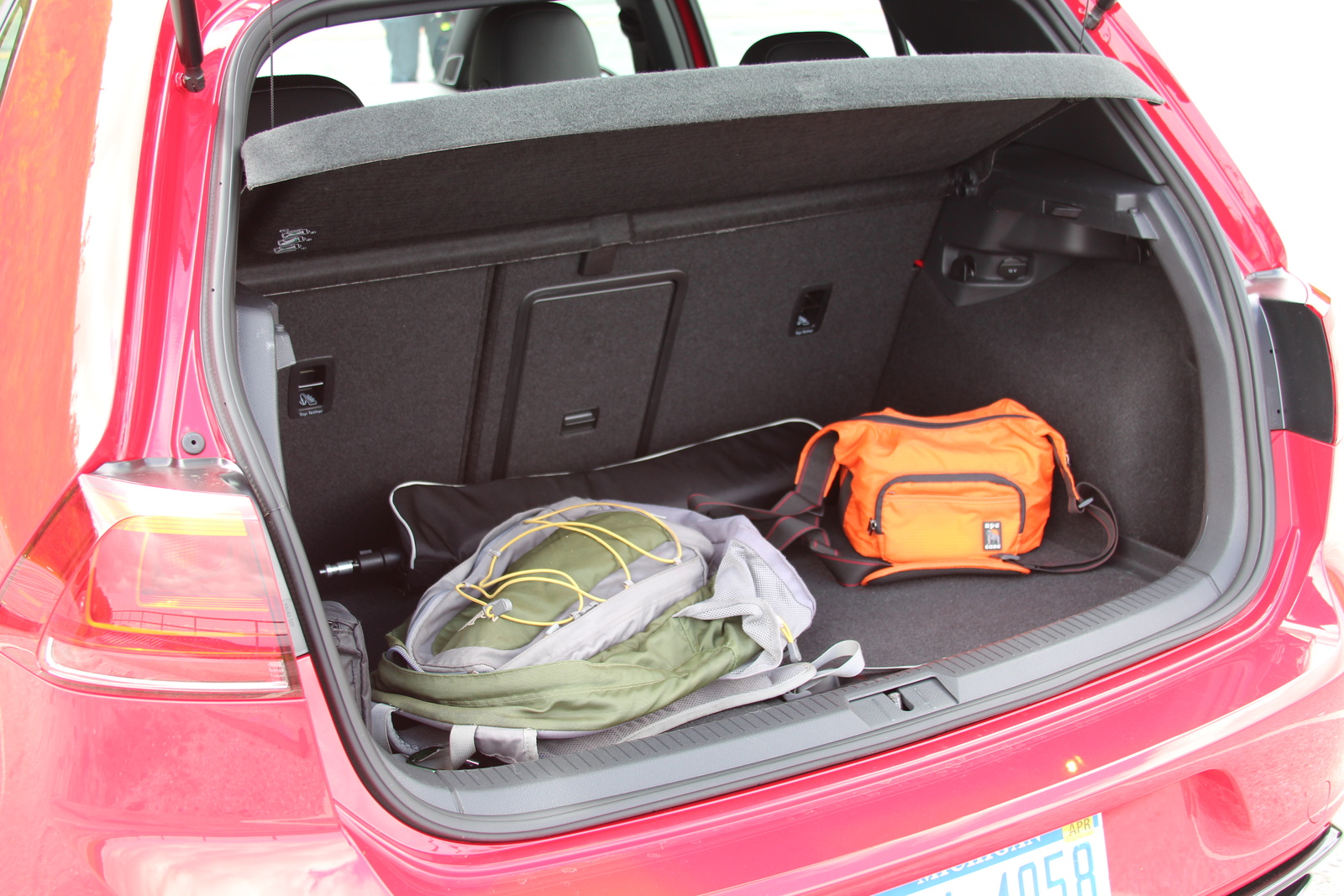 Honestly, I’m struggling to think of a car that better accomplishes all the goals of the Golf R, at least until the Civic Type R returns. For another all-wheel-drive (AWD) hot hatch, the Focus RS is pretty much your only option—though that’s more track-focused and calls much more attention to itself in boy-racer style. A WRX STI used to fit the bill nicely, but there’s no hatch option anymore. If you need a 300-hp, AWD hatchback with a dual clutch and adaptive dampers, this is your answer. It’s classy enough to pick up clients, it’s comfortable enough to go cross-country, it’s capable enough to carve the canyons, and it’s technical enough to tackle the track. Plus, you can drop those rear seats and enjoy 53 cubic feet of storage—more than enough for all your groceries, a college move, some furniture shopping, replacement wheels for your time at the track, or a couple of large dogs. Again, not all at once.

My one complaint is with interior storage for the front seats. There’s very little of it, and you have to resort to using the glovebox or the doors for things like phones, books, or your girlfriend’s clutch. Obviously, this can get annoying. The cause of this issue is even more annoying.

Because of its lack of a locking latch on the center armrest, the Golf R would be in violation of Federal Motor Vehicle Safety Standards if the armrest were to open, meaning VW wouldn’t be able to import it to the U.S. for sale. Rather than fitting the R with a latched armrest cubby, like in the standard Golf and the GTI, VW decided instead to just prevent the armrest from opening at all. But the storage is still there. Not that I’d advocate modifying your vehicle in violation of Federal safety standards, but I’d guess some Golf R owners may have already come up with a solution. 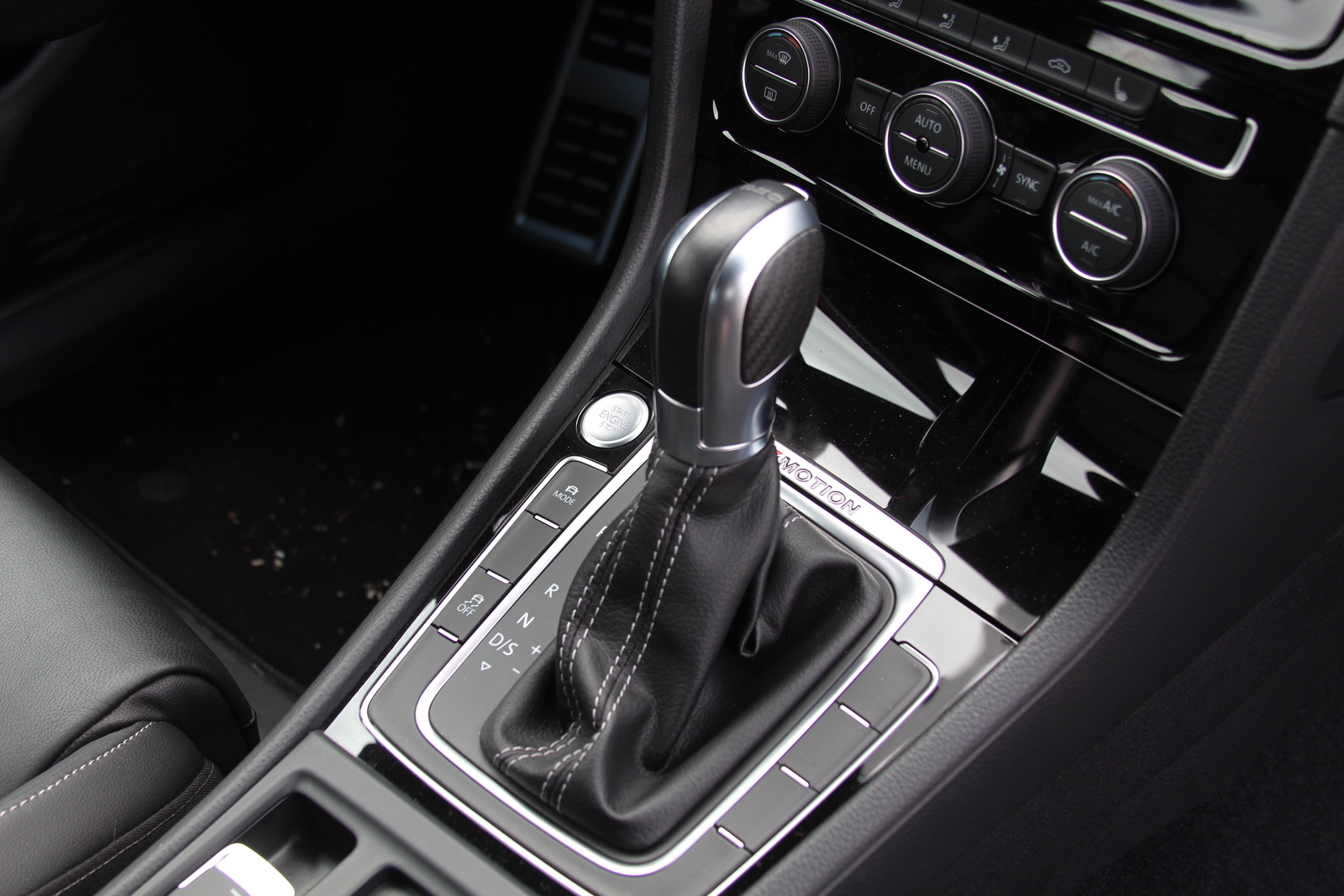 With the addition of the Driver Assistance Package as standard, the Golf R is more technologically equipped than ever before. It now comes with all the features you’d expect from a luxury entrant: parking sensors front & rear, forward collision warning & intervention, blind-spot monitoring with rear cross-traffic, lane-departure warning, adaptive cruise, and even auto high beams.

That said, it’s also more expensive. Making an optional package standard is less newsworthy when you simply pass the cost on to the consumer. Should we include the Haldex 4WD system, Dynamic Chassic Control, or the dual-clutch automatic here? They’re all paragons of performance technology, after all. And with navigation now “standard” as well (since you can’t really get a Golf R without it anymore), there’s little technology you could be left wanting. 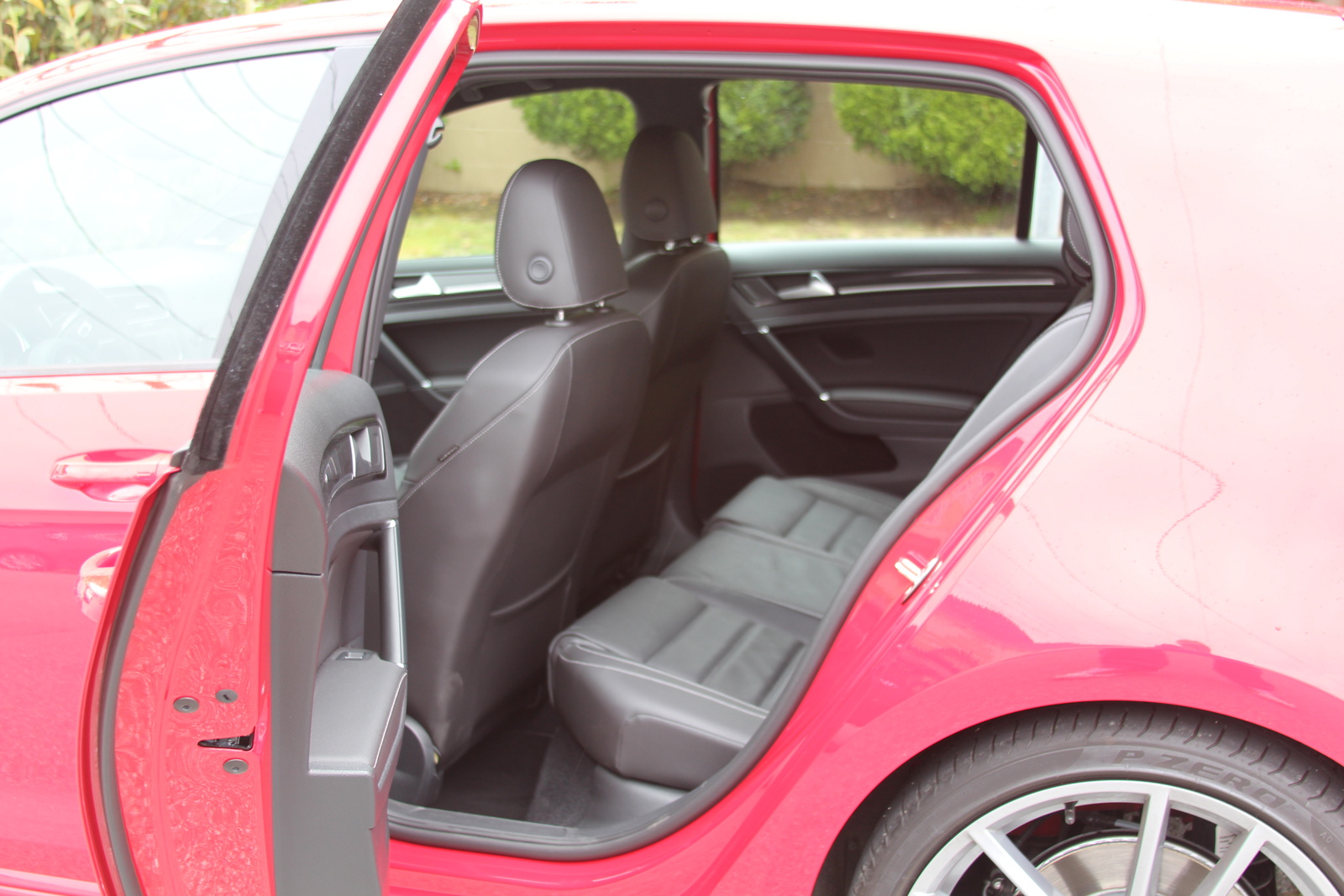 The Golf R enjoys a 5-star safety rating from the government’s National Highway Traffic Safety Administration (NHTSA), despite receiving a 4-star rating in the overall front and front passenger tests. The full suite of safety systems, including the features in the now-standard Driver Assistance Package, contribute to it being a Top Safety Pick from the independent Insurance Institute for Highway Safety (IIHS).

That said, the IIHS gave the Golf R poor marks for its headlight visibility to the sides, especially around corners. In real-world application, this isn’t something I noticed or that concerned me until I read about the issue on the IIHS’s site. Additionally, a low clearance angle for child-seat anchors proved slightly frustrating for testers. 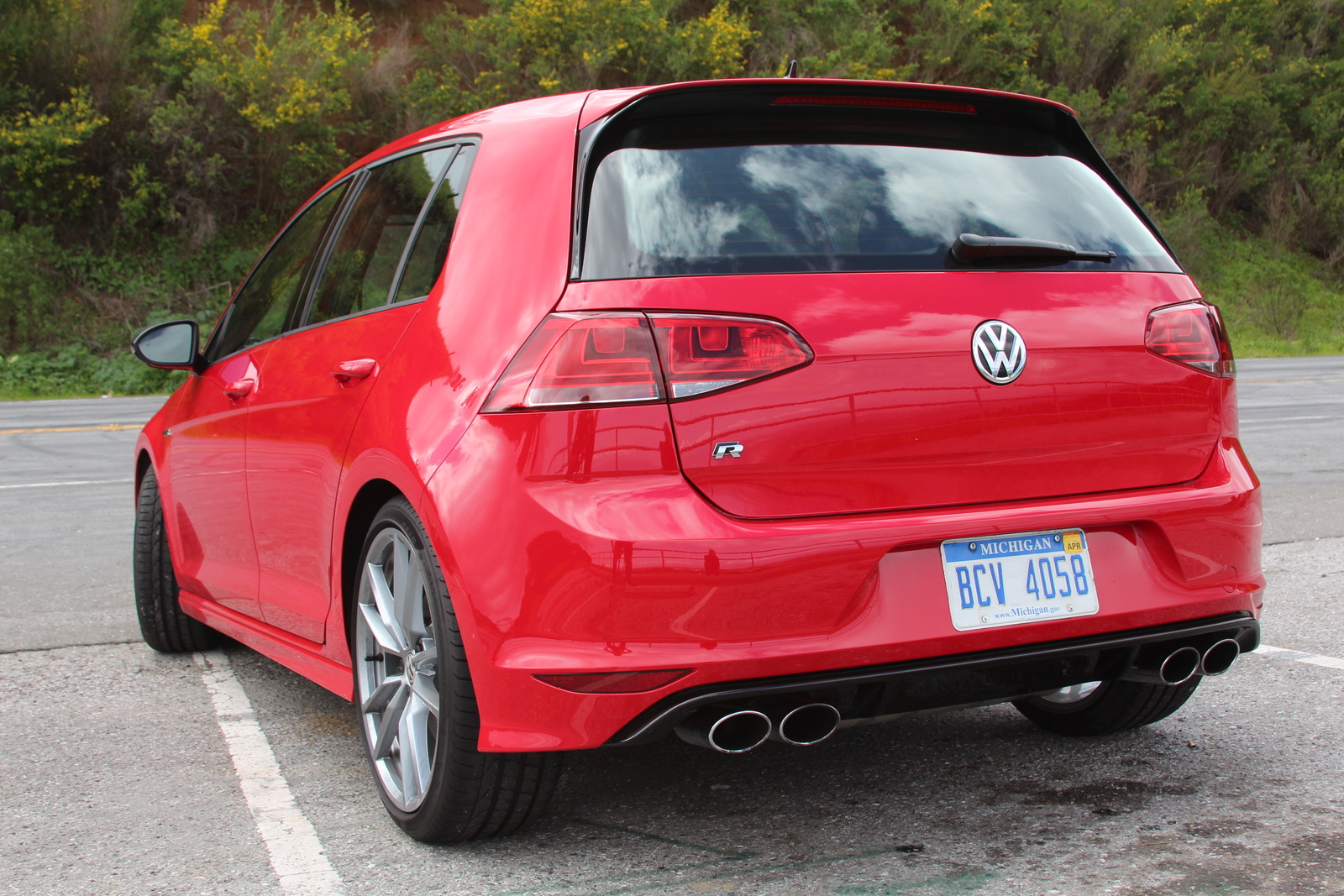 With only the Focus RS providing anything close to competition in the segment, it’s difficult to accurately determine the Golf R's cost effectiveness. When the Civic Type R returns, we’ll have a more thoroughly populated playing field, but for now if you’re looking for an “executive racer” that is as at home on a track as it is meeting with clients, this is the only player in the game.

Beyond that, this is still $40k for a Golf. I think most people will be more than satisfied with the performance of the GTI for a much lower price, or even the standard Golf for that matter. But it’s hard to find this sort of tech and performance for the same price elsewhere. With the addition of the standard Driver Assistance Package, and the resulting price increase, it’s less of a deal, but still an impressive collection of features for the cost.

It should be mentioned that April saw a recall of nearly 6,000 examples of the Golf R as well as other VW models, resulting from airbags and seatbelt pre-tensioners failing to deploy. By the time of publication, this issue should be resolved.

What's your take on the 2017 Volkswagen Golf R?

Users ranked 2017 Volkswagen Golf R against other cars which they drove/owned. Each ranking was based on 9 categories. Here is the summary of top rankings.

Have you driven a 2017 Volkswagen Golf R?
Rank This Car