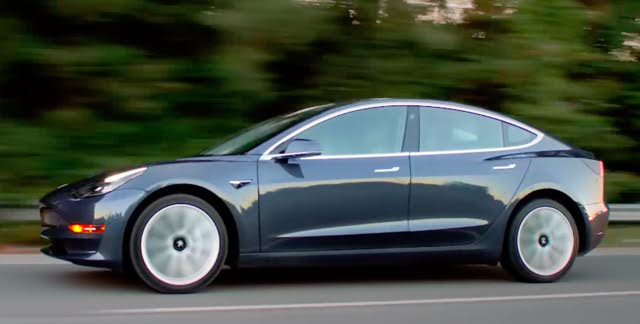 The Tesla Model 3 may be the most important car of our era. It is the first mass-market vehicle from a cutting-edge electric vehicle manufacturer, and it’s simply like nothing else on the market. With the Model 3, Tesla shares completely new ideas about how occupants should interface with a car.

Dimensionally, the Model 3 is much smaller than Tesla’s other wares. It’s midsize in terms of space, but it wears compact overall dimensions thanks to short overhangs and an electric powertrain that takes up little passenger or cargo room.

The car’s exterior says a lot with very little. It bucks the trend of faux main grilles on EVs by not having one at all. Instead, there’s a subtle lip that also helps with aerodynamics. The large LED headlights sit at the front of the fender bulges, and the hood-line deftly cuts around them. Across the sides, the design resembles the Model S with a similar sleek roof, chromework, and distinct window kink just behind the rear doors. The Model 3 does get different door handles in the form of flush puck-shaped rods that pivot outward to give users something to grasp. At the back, things are similarly clean with LED taillights and a prominent spoiler. Like other models, the charging port is concealed on the side of the left taillight. Unlike the Model S and Model X, the Model 3 has a traditional trunk instead of a rear hatch. The front trunk is retained as a second storage option. Overall, the look is refreshing and modern. If Apple were to design an automobile, this would be it.

A minimalist philosophy is displayed in the Model 3’s interior where Tesla has removed everything that isn’t strictly necessary. The dashboard is made up of a simple horizontal panel with a full-width vent and no other visible features. The only dashboard protrusions are the steering column and a free-standing 15-inch touchscreen. The center console is made up of two cubbies, two cup-holders, and an armrest. There’s room for three backseat passengers, and it’s an airy place in which to be thanks to a rear windshield that stretches nearly to the middle of the roof. With the optional glass roof, occupants are treated to a panoramic view of the open sky. And, maximizing practicality, the rear seat splits and folds down to increase cargo space.

Almost all of the Model 3’s features require using voice controls or the giant 15-inch touchscreen that hovers over the dashboard. This includes everything from reading the current speed and adjusting the dashboard vent, to turning the headlights on and off and climate controls. But, the Model 3’s various control panels aren’t all on the touchscreen at once. They’re modal, so they pop up when selected or when a specific physical action takes place. For example, a short press at the tip of the left steering-column stalk does a single wipe of the windshield and pulls up a panel on the touchscreen where the driver can activate the rest of the windshield wipers’ functions. The right stalk acts as the vehicle’s gear selector—with the expected P-R-N-D controls—but, tapping it once while driving pulls up the cruise control panel on the touchscreen, and tapping it twice pulls up the Enhanced Autopilot panel, Tesla’s autonomous driving feature. There are two thumbwheels on the steering wheel for navigating the center display and window switches on every door.

The Model 3’s main talking point is the price—$35,000 before any government incentives. For that, customers get a single electric motor powering the rear axle with 258 horsepower and 317 pound-feet of torque. This is powered by the Model 3’s 50 kilowatt-hour Standard Range Battery option. The combination is good for 220 miles of range, a run to 60 mph in 5.6 seconds, and a top speed of 130 mph. During charging, it can regain 30 miles of range each hour with a 240-volt home outlet, or 130 using one of the company’s Supercharger public charging stations. For $9,000, buyers can opt for the Long Range Battery option, which is a 75 kWh that increase range to 310 miles and top speed to 140 mph. The zero-to-sixty time shrinks to 5.1 seconds, and it can recover 37 miles of range per hour on 240V or 170 with the Supercharger. The Long Range Battery also benefits from a longer warranty, 8 years and 120,000 miles, versus 8 years and 100,000 for the standard option. Later, Tesla will introduce a version of the Model 3 with all-wheel drive (AWD), by way of a second motor on the front axle, that will be available with both the Standard Range Battery and Long Range Battery options. All Model 3’s feature two-mode regenerative braking, which mostly negates the need for the brake pedal or friction brakes.

As far as features, the base Model 3 features 18-inch wheels and cloth upholstery. But, by its very nature, it has a fierce level of standard technology including a dual-zone climate control system, FM and Internet-streaming radio, dual USB ports up front, an auto-dimming rearview mirror, auto windows, Wi-Fi and LTE connectivity, and full LED interior and exterior lighting. Even gaining access to the car is an event, because Tesla replaces the standard key with a pre-authenticated smartphone and Bluetooth app to unlock and start it. Drivers can also use one of two standard wallet-sized key-cards to start the car. A Tesla smartphone app allows users to remotely lock or unlock the car, check the charge state, and pre-set the climate controls.

For comfort and convenience options, Tesla offers the Model 3 with a single $5,000 Premium Upgrades Package that features leatherette upholstery, open-pore wood veneers, heated and 12-way power-adjustable seats, two rear USB ports, a premium audio system, a tinted glass roof with ultraviolet and infrared protection, auto-dimming, power-folding, and heated side mirrors, a power-adjustable steering column, memory-enabled driving profiles, LED fog lights, and covered center console storage with docking for up to two phones at a time. It should be noted that any paint color other than Solid Black incurs a $1,000 upcharge.

There is much to be said about the Model 3’s safety technology. Naturally, it comes with a full set of airbags and a reversing camera, but an array of advanced equipment is standard as well. These include eight automated cameras, forward radar, and 12 ultrasonic sensors. Every Model 3 comes with collision avoidance and automatic emergency braking. An extra $5,000 unlocks Enhanced Autopilot and allows the car to keep within its lane, automatically change lanes, automatically transition between freeways, exit the freeway, and self-park. Tesla is also pre-selling its Full Self-Driving Capability for $3,000, which it bills as a future technology that—pending regulatory approval—will be able to conduct complete trips on its own with no driver intervention. And, like other Teslas, the Model 3 is capable of having its safety and autonomous-driving software updated over-the-air.

The Model 3 breaks almost every automotive paradigm established in the last forty years. With its artful exterior, truly keyless access and start systems, and buttonless interior, the 2017 Tesla Model 3 makes its own rules. Deliveries began in late 2017, but, as Tesla slowly works out kinks in the car’s production system, it will be a while before the it is seen in any significant quantities on the road. In the meantime, Tesla continues to accept reservations for the Model 3 with a $1,000 deposit.

Death Or Stroke While Be For Transaction; Is Wife Obigated To Complete The ...

Early next week I am having a slightly risky medical procedure with a one day recovery. If I died or have a stroke after my bid but before the transaction is completed I my wife (who would co-owner) ...