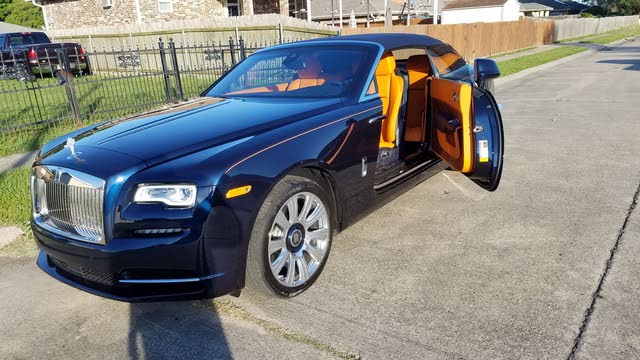 Since its 2016 debut, the Rolls-Royce Dawn has racked up a wide range of awards—from Best Luxury Car in the 2017 UK Car of the Year Awards to various design awards—and no wonder. Drawing its inspiration from the Silver Dawn dropheads of the early ‘50s and many of its features from the 2-door Wraith grand touring (GT) sports coupe, the Dawn is the definition of open-air luxury cruising. Bold yet refined on the outside and comfortable and quiet on the inside, even with the top down, it excels at pampering its passengers and makes a distinctive impression wherever it goes—as expected of a car with the Spirit of Ecstasy perched at the front of its long hood. For 2017, Rolls-Royce dresses up its Dawn luxury convertible with a number of limited-edition color schemes from the House of Rolls-Royce internal design studio.

Although the Dawn (and its Wraith sibling) occupies the entry-level slot in the automaker's lineup, it holds the distinction of being the only convertible currently available from Rolls-Royce. Rather than simply cloning the Wraith and removing its hardtop, Rolls-Royce reshaped 80 percent of its body panels to give the Dawn a sleek, fluid look entirely its own. It features a new bumper design, specially developed tires, and a sound-insulating, powered soft-top roof that effortlessly opens or closes in about 22 seconds at speeds up to 30 mph. Like the Wraith, the Dawn seats 4 passengers in a 2+2 configuration, with plenty of rear legroom and individual spaces for each occupant.

As with its other vehicles, Rolls-Royce emphasizes the bespoke nature of the Dawn, offering nearly limitless design, color, and feature options. In fact, it's safe to assume that each vehicle will be completely unique, tailored to the preferences and requirements of the buyer. To help new owners personalize their vehicles, the automaker introduces a new Couture design collection for 2017, created by a team of in-house specialists. Starting with a neutral canvas of Andalucian White exterior paint and a white and black interior, the collection offers fabric roofs, interior accents, and exterior trim in 3 new colors: Mugello Red, Cobalto Blue, and Mandarin, an orange tone. The Couture interiors feature Arctic White leather upholstery with contrast embroidery to match the color of the roof, contrast stitching on the steering wheel, a dashboard in Piano White with aluminum particles for a silk-like appearance, silk door pockets in the specified color theme, and a bespoke clock.

Like its stablemates, the Dawn is a big car, stretching more than 17 feet in length and measuring over 6 feet wide. Obviously, it won't fit into the compact-car parking spot at your local supermarket, even though it’s the smallest Rolls-Royce in the lineup. The long hood is both athletic and classic, thanks to 2 wave channels that angle back from the Spirit of Ecstasy's wings, and it makes up a good portion of the Dawn’s overall length. A rectangular chrome grille instantly stamps the vehicle as a Rolls-Royce but is relatively reserved, without overstating its presence. To give the front end a fluid look, the designers extended the front bumper and pushed the grille back for a natural step-up from the ground. Horizontal lines flow from nose to tail, creating a clean profile and good proportions for such a large car.

The Dawn’s sleek exterior design optimizes aerodynamics and windflow for top-down driving. A hip just in front of the rear wheels helps direct wind upward, over the top of the car, as it comes off the steeply raked windshield. The high beltline keeps passengers seated low in the car to reduce wind battering. The thickly padded, insulated fabric roof, which is the only top option currently available, was designed not only to ensure a quiet cabin when up but to open and close in complete silence, with no mechanical sounds, grinding gears, or other audible intrusions. When down, the roof stows behind the rear seats under a horseshoe-shaped wood-panel deck. Due to the car's length, the storage compartment doesn't detract much from interior legroom or cargo space, but the Dawn’s 11.3 cubic feet of trunk space still comes up short when compared to the Wraith's 16.6 cubic feet.

The Dawn’s unique mid-body coach doors are hinged at the rear and open at the front, a distinctive feature borrowed from its Wraith sibling. Rolls-Royce stipulates that to exit the vehicle, rear-seat passengers should stand first and then step out, as if disembarking from a luxury motorboat (one preferably tied up in Monaco or at Lake Como, according to the automaker). The coach doors also help improve the convertible body's stiffness and overall strength. Standard exterior features include glare-free LED lighting with automatic headlight dimming, chrome door handles and dual exhaust pipes, and polished 20-inch wheels with run-flat tires.

Given its massive dimensions, the Dawn is a heavy vehicle, tipping the scales at 5,644 pounds. That's almost three tons of steel, aluminum, leather, and wood—enough to make even Atlas groan. To move a car this large and heavy, you need a whopper of an engine—and Rolls-Royce complies with its twin-turbo 6.6-liter V12 powertrain. An astonishing 563 hp and 575 lb-ft of torque drives all that tonnage from 0-to-60 in under 5 seconds, a fairly remarkable achievement, and on to a top speed of 155 mph. The 8-speed automatic transmission uses GPS mapping to anticipate the upcoming terrain, optimize shifting patterns, and improve efficiency. Similarly, dynamic gas-pedal mapping helps adjust throttle response, especially in the mid-range. The V12 manages fuel-economy numbers of 12 mpg city, 19 highway, and 14 combined on premium fuel.

The Dawn’s elegance, sportiness, and confidence extend to its interior, as well Four separate bucket seats provide comfortable seating for the occupants, with wood-surface consoles, trays, and storage compartments throughout the cabin. Upon the Dawn's debut, it received revised instrument gauges to further distinguish it from the Wraith. The 16-speaker Bespoke Audio system was designed for an optimal listening experience whether the top is up or down, and it will automatically adjust the volume depending on exterior noise. Drivers can manage all of the car's interior functions, including navigation and the audio system, via the 10.25-inch LCD screen, which is operated by voice controls or a Spirit of Ecstasy rotary controller on the center console. The number of buttons and dials on the dash has been minimized for a clean, elegant look, and the cabin is further outfitted with leather upholstery, automatic cruise control, a reversing camera, and a head-up display with a heat-detection system.

The Dawn rides on an updated suspension designed for optimal stiffness, weight distribution, and handling. The car sits low and rides on a chassis with redesigned airsprings and rollbars for a smooth, aerodynamic ride. While it’s too big to toss around the corners, the Dawn handles very capably, with only minor disturbances from imperfections in the road. Safety features abound, including a rollover-protection system that will deploy behind the rear-seat headrests in the event of an accident.

Although the Dawn occupies a somewhat rarefied spot in its highly exclusive market segment, it does have a few competitors, including the BMW 7 Series, from which the Dawn and Wraith borrow their underpinnings and a number of components (thanks to their shared parent company). Other competitors include the Bentley Continental GTC and the Aston Martin Vanquish Volante. It should be noted that despite its lofty price tag, the Dawn was designed to attract a younger clientele who would actually drive the car, rather than be driven around in it. Whether it can serve as a daily driver or not remains to be seen.

Have you driven a 2017 Rolls-Royce Dawn?
Rank This Car

What Does It Cost For Auto Pay