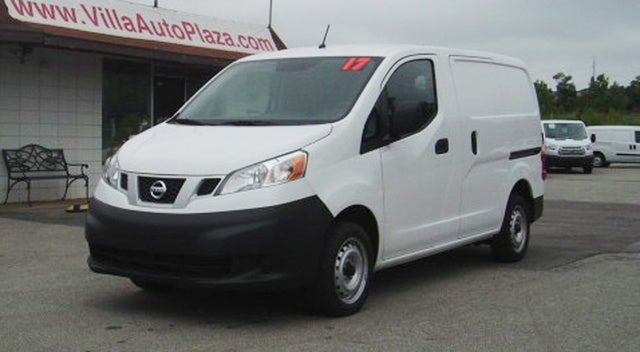 Many of today’s urban-dwelling small business owners just don’t need a hulking, truck-based full-size cargo/work van. Smaller, more maneuverable and fuel-efficient compact vans, like Nissan’s 2017 NV200, provide the cost-conscious tradesmen with a viable solution to big-city traffic and parking. What the NV200 in particular doesn’t offer is much in the way of acceleration, creature comforts, or safety technology. In 2015, the NV200 became the official replacement for Manhattan’s aging fleet of yellow cabs, proof positive this downsized hauler feels right at home in an urban environment.

No changes have been announced for the 2017 NV200 lineup, which leaves it looking and feeling pretty much as it did when it was introduced for the 2013 model year. There is, however, an all-electric concept Nissan calls the e-NV200. This plug-in variation is expected to offer 5-passenger seating, as well as a nifty rear-seat fold-up design that allows the EV to tote nearly the same amount of cargo as the current gasoline-powered version. An 80-kilowatt electric motor is slated to come standard, with regenerative braking helping to recharge the battery while on the go. Although there’s no word about when this ultra-green, all-purpose edition of the NV200 will go on sale (or what it will cost), it does offer a tantalizing glimpse into the future.

The current NV200 is powered by a 2.0-liter inline 4-cylinder (I4) engine mated to a continuous variable transmission (CVT). Look for 131 hp and 139 lb-ft of torque from this matchup, with mileage estimated at 24 mpg city/26 highway/25 combined. One track test had the minivan going from 0-60 mph in a leisurely 10 seconds. Though it’ll handle the highway on a nice sunny day, this van will struggle to climb steeper hills under a full load.

The NV200 won’t impress with creature comforts, either--but it does claim a few unique features that might make life easier for the typical owner. There are 2 sliding side cargo doors and 180-degree-opening 60/40-split rear cargo doors. The center console boasts a large storage area and there’s a sizable storage tray located beneath the passenger seat, and both trims come with 20 mounting points in the cargo bay that are useful for installing a variety of shelves and racks. The SV comes with 6 optional floor-mounted cargo tie-down points and remains eligible for a Technology package that includes NissanConnect with Bluetooth-integrated smartphone apps, voice activation, and satellite radio, all displayed on a 5.8-inch touchscreen. GPS navigation can also be added for an additional fee.

Standard safety equipment includes Nissan’s Advanced Airbag System, with side-mounted and head curtain airbags, along with front-disc and rear-drum antilock braking (ABS). In one braking test, an empty NV200 came to a stop from 60 mph in a lengthy 137 feet. Curiously, neither the government nor the Insurance Institute for Highway Safety has tested this compact van for crashworthiness.

Challenging the NV200 for a share of the small commercial van market are Ford’s Transit Connect, featuring more payload capacity, an extended cab configuration, and an upgraded engine choice, and the Ram ProMaster City. The slightly larger Mercedes-Benz Metris, with its turbocharged powerplant, is also worth a look, though it carries a significantly higher MSRP.

GuruY959J L bought an NV200 for courier work at the first of the year. One comment I've heard about it is that it shares many parts with the Versa. Is this in fact true? I bought this van hoping/expecting to get 500k miles out of it. Is this realistic? I know, helluva time to think about that. But other folks I've heard with Nissan trucks/vans could expect that kind of longevity.

I have a great mini- cargo van , super low miles, clean car but it does have rebuilt title, Does CG allow this to be listed?