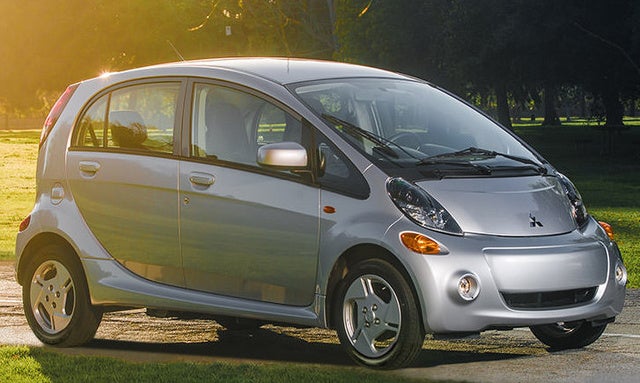 These are odd times for electric vehicles (EVs) like the 2017 Mitsubishi i-MiEV. As the global warming discussion hits a fever pitch, sales of affordable EVs have peaked and declined and are now at such low levels that they no longer really constitute a significant part of new vehicle sales in America.

Mitsubishi has sold the i-MiEV in the U.S. on and off during the past few years. In 2015, a record year for overall U.S. auto sales, Mitsubishi sold just 196 i-MiEVs. We reached out to Mitsubishi America to ask about the i-MiEV's future and were told that there would be a 2017 model but a sales date for it has not yet been set. We interpret that as “If we don’t sell all the 2016s, we won’t need a 2017.”

Unlike the Nissan Leaf EV and the Chevy Volt extended-range hybrid, the i-MiEV was never designed for the U.S. market. As a subcompact (often called a minicar), it is a vehicle intended for Japanese urban markets, where cars of this size--the i-MiEV is only 145 inches long--are commonplace. Any review of the i-MiEV will likely mention parking as one of the car's biggest advantages. But almost all cities require vehicles to park inside a demarcated space in order to be billed on a parking meter system. So does the i-MiEV really offer a real-world urban parking advantage? And how would one charge the car in a partial parking space somewhere out on the street? It seems like 196 people found some kind of answer to these questions, at any rate.

Mitsubishi points out that “The 2016 Mitsubishi i-MiEV is the most affordably-priced 100-percent electric-powered production vehicle available in America today, with a MRSP of $22,995.” If a buyer could use both the $7,500 federal tax deduction and $2,500 state incentive, the Mitsubishi i-MiEV would run as low as $13K, an amazingly low price. At the time of this writing, two were available in my area (Massachusetts) for about $24,000. Keep in mind that these are MSRP prices. A savvy negotiator might be able to bring home an i-MiEV for even less. We expect no price changes for the 2017 model year.

The 2017 Mitsubishi i-MiEV will have an EPA-estimated range of 62 miles, only about half the Nissan Leaf’s 107-mile range. The EPA also rates the i-MiEV at 126 MPGe city/99 highway/112 combined. These are impressive numbers, but the cost of driving the i-MiEV 25 miles is $0.98, not all that impressive next to the 2016 Prius Eco, which costs $0.77 per 25 miles. Using an i-MiEV to save money on personal transportation is also a tricky matter due to the fact that EVs tend to retain less of their value than do gasoline-powered green cars.

On the green side of things, however, ratings for the 2017 i-MiEV will be stellar. It only consumes 0.2 barrels of oil per year and scores a perfect 10 on the EPA smog-rating scale. Since it has zero local emissions, its carbon score (in grams per mile) is zero as well.

The 2017 i-MiEV comes standard with a 8A/12A switchable Level 1 charging cable. With the appropriate outlet, this cable can recharge the i-MiEV in 22 hours at the 8-amp setting, 14 hours at the 12-amp setting. An available 240V/15A Level 2 charging system takes seven hours. There is also a CHAdeMO DC quick-charge port for charging in public, which charges the battery to 80% in 30 minutes. The 2017 Mitsubishi i-MiEV will also incorporate three driving modes to help maximize range. ECO reduces power to extend range, B increases regenerative braking to 100% in order to capture the most possible energy, and D is the normal drive mode.

The 2600-pound i-MiEV has not been tested by Insurance Institute for Highway Safety, but it did earn 4 out of 5 stars overall in National Highway Traffic Safety Administration crash testing. But neither the Volt nor the Leaf have earned top crash-test scores, so the i-MiEV is not exactly lagging behind. No forward collision-prevention system is expected, however.

For 2017, Mitsubishi may include its optional navigation system, or offer just one version of the i-MiEV rather than various trims (if and when the new model is announced). Those interested in an i-MiEV may want to grab a 2016 model if they find one, as the 2017 forecast for this unique vehicle is a hazy one.

What's your take on the 2017 Mitsubishi i-MiEV?

Have you driven a 2017 Mitsubishi i-MiEV?
Rank This Car