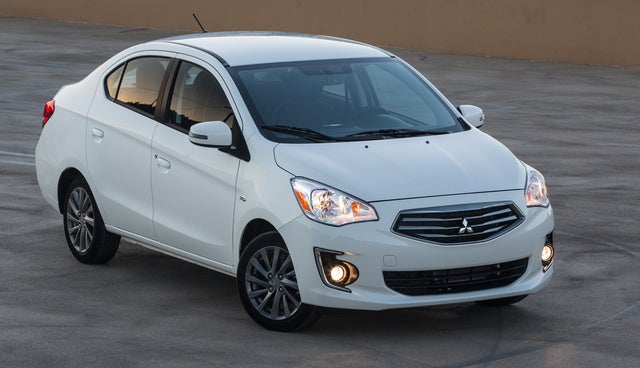 Looking for a Used Mirage G4 in your area?

The current Mitsubishi Mirage is the kind of car you buy when you want to get from point A to point B and don’t really care about how you look, how fast you get there, or how comfortable you are while driving. There’s nothing wrong with that, of course, which is why the market has responded quite favorably to the cheap, basic subcompact automobile that is the Mirage. Previously available as a hatchback, the Mirage now finds its lineup home to a 4-door sedan called the Mirage G4, which was introduced at this year’s New York International Auto Show. Aside from the new body style, notable changes to the 2017 Mirage include slight cosmetic tweaks to the headlights and air intake, a revised interior, and improvements to the engine.

The G4, which apparently stands for “Global 4-Door” represents an effort to expand on the Mirage’s popularity by offering more space and length at a price that’s only slightly higher. It’s still the same basic car, however. The 1.2-liter 3-cylinder engine has been updated with a roller-type camshaft, and its power figures come in at 78 hp and 74 lb-ft, all sent to the front wheels. Gearbox choices are limited to a 5-speed manual or a continuously variable transmission (CVT), and while the Mirage will shy away from steep hills and drag strips, it can certainly reach a comfortable highway cruising speed and stay there.

A modest car with a modest powertrain, one of the Mirage's biggest draws is its fuel economy. It will do 36 mpg combined with the 5-speed manual, or 39 with the CVT. It’s worth noting that those figures are as good as or better than a Smart fortwo, a car that’s considerably less practical and not at all cheaper than the Mirage.

The 2017 Mirage gets new spring rates and shocks, and the brakes have been enlarged. The SEL trim also gets 15-inch alloy wheels. On the handling front, the Mirage features a rather basic suspension, so it should drive like other Japanese and Korean subcompacts of the past 10 or so years.

While the Mirage's interior has been revised for 2017 with a different 3-pod gauge cluster, steering wheel, and upholstery, it’s still a basic space. There are luxuries, but most of them come optional. Yet even a cheap car like this still gets an infotainment system, with Apple CarPlay and Android Auto compatibility and smartphone integration. Air conditioning, remote keyless entry, power windows, and tilt steering are also standard--but then again, features like those have by now been standard on most cars for decades.

SEL trims bring a lot more to the table, including automatic climate control, heated front seats, front fog lamps, heated mirrors, cruise control, a leather-wrapped steering wheel, and a rear-view camera. As for storage, the Mirage G4’s modest trunk has 12.3 cubic feet of storage space, well short of the hatchback’s 17.2 cubic feet, but still plenty of room for most needs.

The Mirage is about as basic as it gets, recalling econo-boxes of the 90s that offered little more than a steering wheel and four wheels. But for younger buyers with student loan and urban rent payments, there isn’t much choice beyond vehicles such as this, as far as affordability goes. The Mirage is slow, probably not fun to drive, and blandly styled, but it gets the job done and that’s all some people ask of their cars. Its impressive fuel economy and good warranties are added bonuses.

What's your take on the 2017 Mitsubishi Mirage G4?

Tannertp1 Love the car quieter than the versa

Guru9FQ51 I love this car. It's very comfortable , and the fuel economy is outrageous !

Have you driven a 2017 Mitsubishi Mirage G4?
Rank This Car

Looking for a Used Mirage G4 in your area?

I have a 2017 Mirage G4 SE, I am hoping to eventually swap a more powerful engine in it but I don't know where to start. I'm not a mechanic but I dabble in the most basic form; Something broke on ...