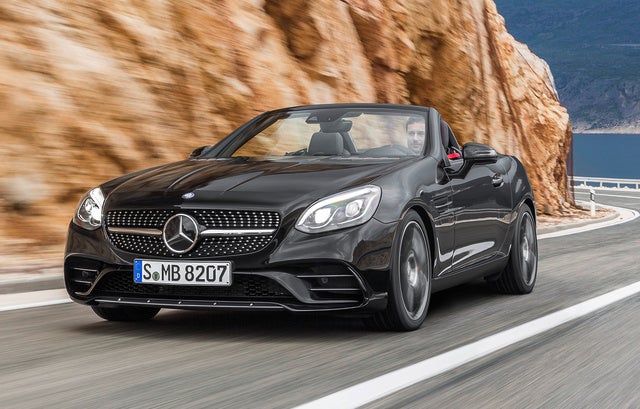 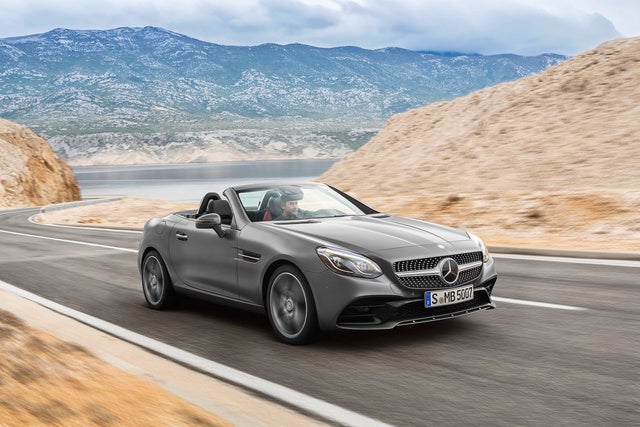 It has been said that convertibles are a reward. They're not really as useful or versatile as a crossover, minivan, or SUV, and so they usually end up reflecting a desire rather than a need. But now that it's 2016, even a niche vehicle like a roadster has to be comfortable, stylish, and outfitted with all of the latest technology. The list of true roadsters still available today is short, but even among those, few combine the necessary attributes as well as the all-new Mercedes-Benz SLC-Class.

That name might sound new to some, but it should be familiar to Mercedes fans. The roadster you see here was previously dubbed the "SLK", a nimble 2-seater with a power-retractable hardtop. Mercedes-Benz dubbed the "SLK" the "SLC" for 2017 so that it would fit with the brand's new naming conventions. But the SLC designation is not actually new: those same letters were affixed to the trunk-lid of a 4-seat hardtop coupe in the 1970s and ‘80s. The new SLC, however, is a far more advanced machine, running on a short wheelbase and incorporating tight proportions, a high-tech folding roof, and a range of engines that combine spirited performance with less-outrageous fuel consumption.

The transition from the SLK to the SLC is a big change too--much more than a new set of letters. The SLC gets a new look, with design cues following its big brother, the redesigned SL-Class. That means smoother lines, more rakish headlights and taillights, and a more attractive overall evolution of the latest Mercedes design language. The larger SL does suffer from some weird swoops and curves, but, thankfully, those have not found their way onto the SLC.

Mercedes-Benz does not specify how long it takes for the top to retract, but claims it will open or close at speeds of up to 25 mph. The outgoing SLK-Class performs the task in 20 seconds.

Opening the top reveals the sharply styled, driver-focused interior. Cabin updates from the SLK are minimal--and the SLK is a solid starting point as far as cabins are concerned--but we were hoping the SLC's interior would have moved a little closer to the elegance of the new C-Class (here’s hoping a mid-cycle refresh in years to come will bring that to the table). But the SLC’s cabin is nevertheless a great place to be. It includes the ever-useful COMAND system, operated via a dial in the center stack, which provides access to the audio and climate control systems and can pull contacts and music from a Bluetooth-connected smartphone

The core of the SLC lineup is the SLC300, which features a 2.0-liter turbocharged inline four, making 241 hp and 273 lb-ft of torque. For those seeking more power, the Mercedes-AMG SLC43 offers a twin-turbocharged 3.0-liter V6 that produces 362 hp and 384 lb-ft of torque. With either trim, power is sent to the rear wheels through a 9-speed automatic transmission. If you were looking for a manual transmission or V8 power, you may be out of luck--those options appear to have ended with the SLK. But the 9G-Tronic transmission is still a slick-shifting unit with steering-wheel-mounted paddle shifters to let you select your own gear during hard driving, and although the V6 makes about 50 hp less than the V8, the weight savings should be readily apparent.

Mercedes-Benz has been doing the convertible thing for some time, and has learned what drivers need to make a drop-top livable year-round. The Airscarf system, for instance, is comprised of hot-air vents set directly below the headrest. This creates a layer of warm air, allowing you to drive with the top down well into the evening, or even during the early spring or late fall. You can also open and lower the top when not in the car with the help of the "s" button on your key fob. And when it gets cold enough for the top to finally go up, the optional ($2,500) panoramic moonroof with Magic Sky Control features a variable-transparency roof panel that can go from opaque to clear with the push of a button, letting in views of the night sky.

Some convertible lines come and go, but even though the Mercedes-Benz SLC-Class bears a new name, it continues to provide all the hard-earned years of M-B roadster know-how. You’ll be hard-pressed to find a roadster with an equal blend of performance, comfort, and thoughtful features.

What's your take on the 2017 Mercedes-Benz SLC-Class?

Kenneth_rosey1 The performance of this car is amazing. Way more than I expected.

Have you driven a 2017 Mercedes-Benz SLC-Class?
Rank This Car