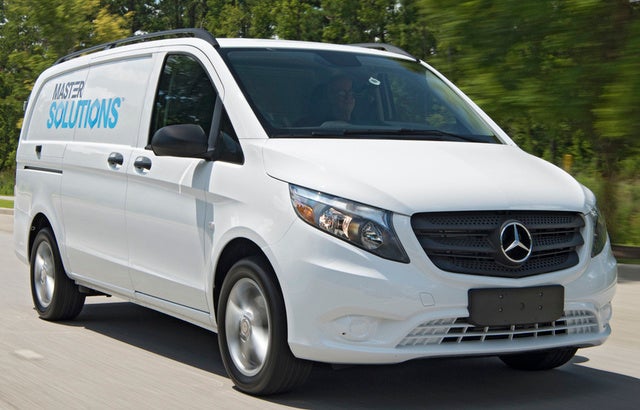 After its success with the Sprinter, Mercedes-Benz decided to make a downsized van that was big enough to carry a decent load but could fit in the average garage, slalom through downtown traffic, and squeeze into tight urban parking spots. The result is the uniquely sized Metris Cargo and its sibling, the Metris Passenger. Filling the niche between full-size vans like the Sprinter and Ford Transit and compact haulers like the Ram ProMaster City and Ford Transit Connect, the 2-seat 2017 Metris Cargo won’t impress with luxury features, but should work well for a small tradesperson or livery operator.

The Metris lineup got derived from Mercedes’ Vito cargo van, which has been cruising European roadways since 1996, and was introduced in 2016. The 2017 Metris Cargo will be joined by the debuting Metris Worker Cargo van, a cheaper alternative with limited standard and optional features. The regular Metris Cargo with no extras will cost $29,815, while the Metris Worker Cargo has a base MSRP of $25,995. Both models feature 186 cubic feet of cargo space behind the seats and can tote up to 2,502 pounds of payload.

The Metris Cargo and Worker Cargo will pack a turbocharged 2.0-liter inline 4-cylinder engine for 2017. Mated with a 7-speed shiftable automatic transmission, the engine puts out 208 hp and 258 lb-ft of torque for a maximum towing capacity of 5,000 pounds and fuel-economy ratings of 21 mpg city, 24 highway, and 22 combined. Each van can also be equipped with an optional fuel-saving automatic engine stop/start feature that shuts the engine down at a stop, then restarts it when you hit the accelerator. The Metris’ nearly car-like handling capabilities and load-adaptive electronic stability control nicely complement its brisk acceleration.

Don’t expect the Metris Cargo or Worker Cargo to offer the luxury of Mercedes’ sedan or coupe offerings. The cabin sports minimal standard creature comforts and abundant hard plastic surfaces, while an optional bulkhead between the cargo area and the seats can mean uncomfortably cramped legroom for taller drivers. And you won’t find Mercedes’ touted COMAND infotainment suite in the Metris, either.

Expect the 2017 Metris Cargo and Worker Cargo to be delivered with standard traction control, crosswind stabilization, and side-mounted airbags with head-protection chambers. The optional Premium Safety package offers blind-spot monitoring, lane-departure alerts, and forward-collision prevention technology, all of which is practically a necessity given the Metris’ ultra-small exterior mirrors. The Active Safety Plus package can be bolstered with an available automated parking program, which uses front and rear parking sensors to locate and steer the Metris into a parallel parking space while the driver handles throttle and shifting tasks.

What's your take on the 2017 Mercedes-Benz Metris Cargo?

Have you driven a 2017 Mercedes-Benz Metris Cargo?
Rank This Car