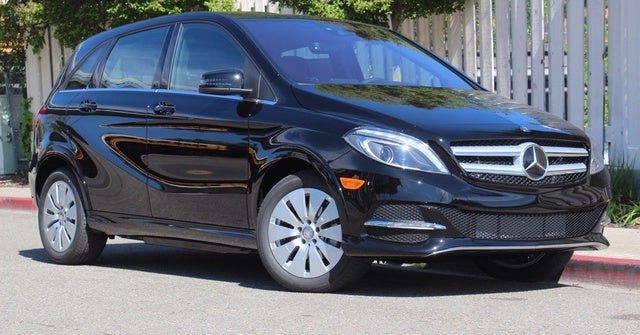 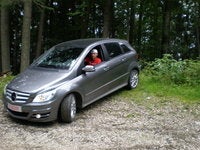 Since its introduction in Europe in 2005, the Mercedes-Benz B-Class luxury 5-door hatchback has been a car in transition. Originally designed as a compact, affordable gas-powered vehicle equipped with small, low-hp engines, it stayed under the radar for more than half a decade as rumors circulated about a possible AMG powerplant and a tentative U.S. debut. The AMG engine never came along, but the B-Class finally arrived in U.S. showrooms for the 2014 model year, with extensive tweaking under the hood.

Specifically, the gas engines were gone, replaced by a 132-kilowatt, 177-hp electric powerplant borrowed from Tesla, in which Mercedes had a financial stake at the time. As such, it became the German automaker's first electric vehicle (EV) on American shores. Performance numbers were average, with a range of 87 miles on a full charge, a 0-60 mph time of 7.9 seconds, and a top speed of 100 mph.

Despite its Mercedes-Benz pedigree and booming sales in Europe, the B-Class has always faced stiff competition from other EVs in the U.S., like the Chevy Spark EV, the Chevy Volt, the Ford Focus Electric, the Nissan Leaf, and the Honda Fit EV (now out of production). As a result, Mercedes sold only about 325 B-Class EVs in its first year, which climbed to about 1,850 units for 2015 before tapering off and even dropping in 2016. Obviously, the B-Class was not compelling auto buyers to break down the doors of their local showrooms to get their hands on an EV with the three-pointed star on the grille. But the electric hatchback was in line with requirements for low-emission vehicles in states like California and New York, and enabled Mercedes to put down its marker in that particular automotive segment.

For 2017, rumors are again flying around the B-Class. The alliance with Tesla is gone, as Mercedes has sold its shares in the innovative tech company and brought the design and production of the electric powerplant in-house. According to reports, we should see a next-generation B-Class electric powerplant sometime in 2017 or 2018, with a more efficient design to boost the vehicle's range on a single charge to around 220 miles, a sizable improvement over the current version. Mercedes intends to build the next-generation B-Class at its plant in Hungary, which is currently being expanded and refitted for the new launch.

Until the updated powerplant appears, expect the B-Class to continue with its current performance numbers and features. Available in a single B250e trim, it retains the same electric drive as in previous years and continues to deliver a high-end interior, as expected from Mercedes, as well as a smooth, nimble ride, thanks to its finely tuned chassis and aerodynamic design.

Mercedes made some minor tweaks to the exterior design of the B-Class in 2015, and though it's beginning to look a little dated, it still presents a clean, fluid shape. Highlights include a simple-yet-elegant front end with a two-slat chrome grille and a lower dark-paneled scoop that adds a sporty element. The LED daytime-running-light bars at the lower front corners are a nice touch, and a unique graphic design makes the power heated side mirrors stand out. Sweeping side lines, a sloping roof, flared fenders, and minimal overhangs ensure good aerodynamics and aesthetics.

The B-Class delivers a solid, capable ride and nimble handling, thanks in part to its low center of gravity. Mercedes positioned the 28-kilowatt lithium-ion battery low in the vehicle's body, in a space under the cabin floor, which helps improve stability. A 4-wheel independent suspension, electromechanical power steering, and electronic stability control all roll over from the previous year. The front-wheel-drive B-Class rides on sporty 17-inch 10-spoke alloy wheels.

The battery itself features a built-in warmer to keep it from freezing up in cold climates. Owners can charge the battery using any household 120-volt outlet, or a dedicated 240-volt charging system available from Mercedes. A charging time of less than two hours gives the EV a 60-mile range, while a full charge on a 240-volt home system takes about 3.5 hours. While out and about, owners also can pull into any public charging station. In addition, as an EV, the B-Class can access HOV lanes for quicker commutes in urban areas.

Regenerative braking comes standard, though owners can opt for a radar-based regeneration system--an industry first, according to the automaker. The optional system maximizes energy recuperation based on the flow of traffic and gives drivers the ability, via steering-wheel-mounted shift paddles, to choose between three recuperation levels. A mobile app makes it easy for owners to monitor the B-Class's battery status, find charging stations, and preheat or precool the cabin at home while the vehicle is still plugged in.

The electric powerplant, which includes the battery, a zero-emission electric motor, and a single-speed transmission, delivers 251 lb-ft of torque for quick acceleration. Owners can choose from ECO+ and Sport transmission modes to emphasize performance or efficiency.

Inside, the B-Class seats five in a surprisingly roomy cabin for a compact hatchback. Chrome detailing, round air vents, ambient cabin lighting, and illuminated front door sills add a touch of elegance. Power-adjustable front seats, dual-zone climate control, and a 7-inch center-dash display screen are among the standard features. Options include leather upholstery, heated front seats, and a choice of wood trims.

The B-Class comes well-equipped with all the expected tech features, including a multimedia system with Internet access, navigation with a voice control option, and HD Radio. A variety of packages add satellite radio, a rear-view camera, parking assist, and a premium audio system, as well as the automaker's mbrace communications and security system. Safety features include nine airbags, adaptive braking technology, and collision-prevention assist.

Mercedes currently offers the B-Class in 11 states, including California, New York, New Jersey, Massachusetts, Vermont, and Oregon. If you're interested in getting your hands on one, you can visit the automaker's website to find a B-Class in your area.

What's your take on the 2017 Mercedes-Benz B-Class?

mbullock47 That premium gas that it takes must go in a jerry can in the trunk, the car is electric only.

Have you driven a 2017 Mercedes-Benz B-Class?
Rank This Car

Are you inetersted in purchasing my used 2017 B250 Mercedes 20,000 km owned by me only grey colour in mint condition

Cargo Space On A 2019 Nissan Rogue

comparing cargo room of these 2 vehicles