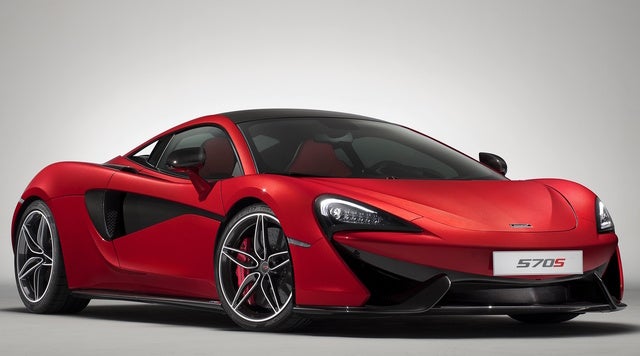 By now, it’s easy to forget that McLaren didn’t become a volume car manufacturer until the 2011 MP4-12C—before that, it was all racing and only racing. Sure, there was the 240-mph F1, but even that had a limited production run of only 106 cars. McLaren has come a long way in the last 5 years—now, it’s a full-fledged carmaker with almost 100 dealerships worldwide, a fairly full model range, and a futuristic factory in Surrey, England, that produces hundreds of cars every year. One of its new offerings is the 570S, which was first unveiled at the 2015 New York Auto Show. It’s similar to the 650S and 675LT, with slight variations in the frame, body, and suspension; less engine output; and, of course, a lower price.

The twin-turbo 3.8-liter V8 engine in the 570S is a detuned version of the 650S’s that produces 562 hp (or 570 PS for “PferdeStarke,” a German unit often described as “metric” horsepower, hence the model name) and 443 lb-ft of torque. As in other McLarens, it lets out a great, screaming wail at full song, and a louder sports exhaust is available if you want to really let loose. Paired with the V8 is a crisp, 7-speed paddle-shifted dual-clutch automatic transmission. The 570S has a 0-to-60 time of 3.1 seconds, a quarter-mile time of under 11 seconds, and a top speed of 204 mph—while technically slower than some of its stablemates, it’s still fast enough to scare the pants off driver and passenger alike. The 2017 model’s new stop-start feature will likely improve last year’s fuel-economy rating of 16 mpg city, 23 highway, and 19 combined, but since this midengine exotic car will probably go only a few hundred miles a year, it seems like a rather unnecessary addition.

The 570S weighs in at a little over 3,000 pounds, which makes it a featherweight compared to most of its competitors—thanks in large part to a carbon-fiber monocell chassis and aluminum body. Meanwhile, features like aeroblades, side skirts, and a carbon rear diffuser keep the car planted, while carbon-ceramic brakes check its ferocious acceleration with equally ferocious stopping power. The 570S also has a brake-steer system that applies more braking to the inside rear wheel for faster cornering.

Inside the 570S, Handling and Powertrain knobs each offer 3 selectable driving modes—Normal, Sport, and Track—for individual adjustment of power and handling response. And because supercars are expected to have at least some degree of civility these days, the 570S also comes with a lift system that will raise the nose by a few inches to help it up a steep driveway or parking-garage ramp without that cringe-worthy sound of carbon fiber scraping across concrete.

While the 570’s rear visibility is predictably limited, its interior doesn’t look or feel as spartan as that of the typical track-day car. There are enough standard convenience features to keep most people happy, with USB ports, Wi-Fi, Bluetooth, and a reversing camera, although the resolution isn’t particularly good for a six-figure automobile. Features and controls are centered on an iPad-like touchscreen in the middle of the dash, and the car doors are designed for easy entry and exit. An available Luxury Pack adds heated and powered seats and a 12-speaker Bowers & Wilkins sound system.

The 2017 570S offers a slightly more practical way to acquire a piece of McLaren’s legendary precision engineering without sacrificing too much savage performance or laser-sharp responsiveness. McLaren plans to build 800 examples of the 570S for 2017, so this model is a key component of the company’s gradual expansion. While high volume for a company like McLaren, the 570S is still a highly exclusive car—driving one, you’re unlikely to ever cross paths with another.

What charging method is best for prolonging the life of the lithium battery?