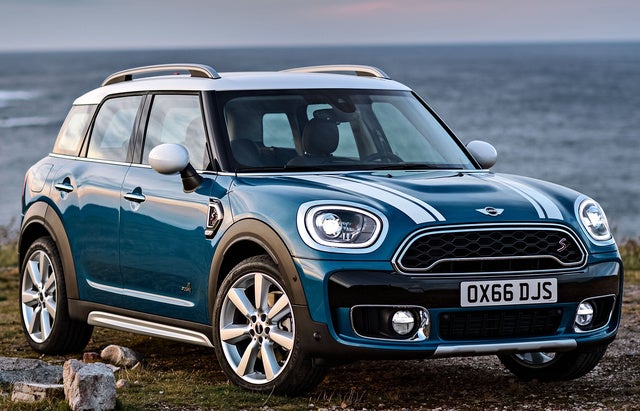 If you like the looks of the MINI Cooper but don’t want to drive a tiny car, the MINI Countryman is for you. The 2017 version is 8 inches longer and 0.4 inches wider than its predecessor, making the new Countryman the biggest MINI ever built (which is all relative, given the typical MINI size). It competes comfortably in the crowded upscale compact-crossover segment against the Audi Q3, Mercedes GLA, and Infiniti QX30, and it shares a platform with another rival, the BMW X1.

The 5-passenger Countryman offers 37.6 inches of rear legroom and 54 inches of rear shoulder room. With the rear seats up, the trunk has 17.6 cubic feet of space—30 percent more than the outgoing car. The Countryman is available with front-wheel drive (FWD) or MINI’s all-wheel-drive (AWD) system, ALL4. No matter which you choose, you can pick from three trims: Cooper, Cooper S, or Cooper S E.

The Countryman Cooper trim comes with a turbocharged 1.5-liter 3-cylinder engine—the same one found in other entry-level MINIs—mated to a 6-speed manual or 6-speed automatic transmission for an output of 134 hp and 162 lb-ft of torque. 17-inch alloy wheels and FWD come standard, but ALL4 is now an option for 2017.

Step up to the Countryman Cooper S trim and you’ll get a turbo 2.0-liter 4-cylinder engine rated at 189 hp and 207 lb-ft. A 6-speed manual transmission comes standard with either FWD or ALL4, though a unique 8-speed automatic transmission is available. 18-inch wheels, upgraded seats, and LED headlamps are all included.

The plug-in hybrid Countryman Cooper S E trim will debut later in 2017. It will be available exclusively with ALL4 and a 6-speed automatic transmission, and its electric motor and 3-cylinder gasoline engine produce a combined output of 221 hp and 284 lb-ft. MINI claims it has an electric-only range of up to 24 miles. Additionally, there are rumors that a souped-up John Cooper Works trim may debut sometime in the coming year.

The Countryman comes equipped with a standard panoramic sunroof, leatherette upholstery, keyless entry, rear parking-distance control, automatic headlights, and rain-sensing wipers. On the technology front, an infotainment system with a 6.5-inch touchscreen (MINI’s first), a reversing camera, Bluetooth, and Siri Eyes Free are included. Owners can also opt for the available Technology package, which features an 8.8-inch touchscreen, an updated user interface, and Qi wireless charging. The MINI brand is known for its customization options, so expect a myriad of interior finishes and special paint colors when the Countryman goes on sale.

What's your take on the 2017 MINI Countryman?

GuruDF4HB I just test drove a Countryman Cooper S and loved it. It felt spacious and offered a very smooth ride with lots of power. The new colors make it a much more attractive and stylish car choice too.

Have you driven a 2017 MINI Countryman?
Rank This Car

Where do I go to have heated front seats installed in my 2017 in my Mini Cooper Countryman? I see the button on my dash that would be used. As I think in 2018 or 2919 they started installing them ...

Took car to dealership and they say sand got into. A lot of sand. I was at the beach but my car sat in the Cindi parking lot locked up after I unloaded on Thursday. Went to load it Monday night and...