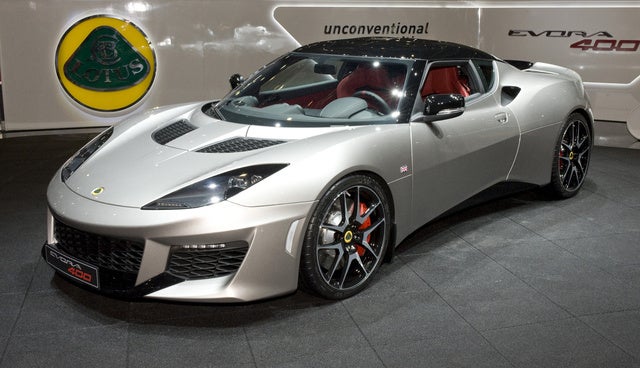 Returning to U.S. showrooms after being sidelined for a year, the updated Lotus Evora 400 sport coupe has improved in many ways, though it still has its drawbacks. Certainly, when it comes to its design, handling, build quality, and prestige, the Evora excels, tapping into the boutique automaker's heritage and reputation, which still carries some cache despite the company's financial troubles over the past half decade or so. In fact, the Evora represents Lotus's emergence from its past problems and serves as the automaker's sole new introduction in the U.S. this year.

In relaunching the Evora, Lotus focused on the car's lightness and performance, as well as interior cabin space. In the past, test drivers and reviewers have dinged the Evora in part for its Toyota-sourced V6 engine and overall performance, something that should be the driving force of a hand-built semi-supercar like this one. With the revamped Evora, Lotus has addressed those issues while still keeping to its original goal of creating an upscale sports car that straddles the line between daily driver and highway rocket.

For the most part, the 2017 Evora achieves that goal, though some recent test drivers say it still lacks true supercar power and performance. Some also question its overall value when compared to such competitors as the Porsche 911, Corvette Z06, and Jaguar F-TYPE. But none of those cars quite match the distinctiveness of the Evora, which is guaranteed to turn heads when you pull into the office parking space or take it on a quick jaunt to the grocery store.

Finding the proper balance between performance and functionality has been a sticking point for the Evora, but Lotus believes it has finally hit on the right combination. The automaker has boosted horsepower for the 2017 Evora's 3.5-liter V6 to 400--hence the car's new 400 nomenclature. That represents an increase of 55 hp over the previous supercharged version of the engine. Lotus achieved that horsepower number by equipping the V6 with a larger supercharger and an air-to-water intercooler, which improves airflow to the cylinders. Torque also jumps to 302 lb-ft, up from 295 lb-ft for the earlier version, with peak torque at around 5,000 rpm. All that power drives the Evora from 0-60 mph in 4.1 seconds and to a top speed of 186 mph, making it the fastest production car ever built by Lotus.

That helps close the performance gap many reviewers have noted about the Evora. But some still have issues with the V6, which also powers the Toyota Camry, although in a completely different configuration. Rather than mount the engine traversely over the front wheels, as in the Camry, Lotus has moved the V6 behind the cabin, in a midengine placement, where it can directly drive the rear wheels. The V6 mates to either a 6-speed manual transmission with a short-throw shifter or a 6-speed automatic, which shifts faster than the manual and provides even quicker acceleration. The automatic includes steering-wheel-mounted paddle shifters, so drivers can shift manually if desired. Expect fuel-economy numbers for the power-boosted 2017 Evora to come in somewhere around the previous version's 20 mpg city/28 highway/24 combined.

While the Evora has never been a heavy car, due to Lotus's longtime obsession with efficiency, simplicity, and lightness, its overall power-to-weight ratio has improved for 2017, as Lotus has shaved 13 pounds (and up to 93 pounds with optional weight-saving features) from the car's body and chassis. At the same time, the Evora sits 2.2 inches closer to the ground, lowering its center of gravity and making for a road-hugging ride. Some streamlining of the body has helped improve aerodynamics and downforce at higher speeds, resulting in zero lift. Other new features for 2017 include revised front air-cooling intakes, a more prominent rear diffuser, and a redesigned rear spoiler.

Old-school hydraulically assisted steering, as opposed to electrically assisted, results in plenty of road feel and excellent responsiveness. The large sport brakes with ventilated discs and 4-piston calipers (14.6 inches in the front, 13.8 inches in the rear) provide on-the-dime stopping power, and improved body rigidity keeps the car from wobbling and wiggling under hard braking. Rather than using carbon fiber, the go-to material for certain supercars, Lotus opts for a chassis of bonded aluminum, which helps keep weight and costs down. New components like narrower rocker sills and thinner doors help shave off the pounds and make it a little easier to get into the car.

The Evora rides on a fully independent double-wishbone suspension with an anti-roll bar, updated Eibach springs, and revised Bilstein dampers. Lotus equips the manual-transmission Evora with a Torsen-type limited-slip differential, which is not available with the automatic transmission. A Dynamic Performance Management system gives drivers the option of choosing from three drive modes, including Drive, Sport, and Race, which make adjustments to the throttle, exhaust, differential, and stability control system for a more aggressive driving experience. For 2017, Lotus switched out Pirellis for Michelin Pilot Sport tires, with 19-inch wheels in the front and 20-inchers in the rear.

In addition to all the other updates, the 2017 Evora gets a redesigned cabin with more room, especially in the driver's footwell, which drew some complaints in previous years for its tightness and pedal layout. The driver's seat now rakes further back, and reviewers note a more open feel in the cabin. The Evora seats four passengers in a 2+2 arrangement, though don't expect a lot of room in the rear. Some say the rear seats are also tricky to access due to the coupe configuration and sills. Owners can opt to have the rear seat removed to further reduce weight. A cleaner instrument cluster and improved placement of buttons and switches makes it easier to manage and monitor the car's activities.

In the past, the Evora has taken some heat for its safety features, so Lotus has added side-impact airbags to the Evora for the first time. Other standard safety features include traction control and electronic stability control.

Needless to say, in most instances, the Evora offers an exhilarating driving experience, with enough power for most maneuvers, a heart-thumping exhaust note, and stellar stability and handling. But it also has a few drawbacks. Visibility out the back remains tricky, excessive road noise intrudes into the cabin, and some say the pedals are still off-center. But all those issues add to the Evora's quirky character and, ultimately, its uniqueness.

Have you driven a 2017 Lotus Evora?
Rank This Car

I Can't Seem To Add Photos To My Listing

I have a listing but I can't seem to upload pictures