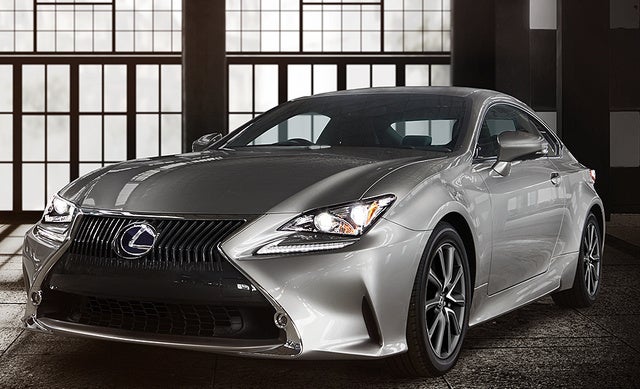 The Lexus RC series was introduced for the 2015 model year as an alternative to 2-door luxury coupes from BMW, Audi, and Mercedes-Benz. The RC is available in several different versions with different powertrains, and the RC 300 is a V6, all-wheel-drive (AWD) machine that takes a middle spot in the RC lineup. Still a fairly new design, the RC 300 doesn’t introduce any major changes for 2017.

While RC stands for “Radical Coupe,” there isn’t anything revolutionary about this car. The RC is essentially a slightly lower and narrower, sportier, 2-door version of Lexus’ popular IS. The engine for the RC 300, despite its name, is actually a 3.5-liter 4-cam V6 with variable valve timing (VVT) that makes 255 hp and 236 lb-ft of torque. The 6-speed automatic transmission sends power to all four wheels, up to 70 percent of which goes to the rear. While not much more powerful than the 4-cylinder RC 200t, the few extra ponies under the hood of the RC 300—combined with its AWD—make for a 0-to-60 time of 6.3 seconds, a full second faster than the RC 200t. For reference, though, the equivalent BMW 4 Series will still outperform the Lexus in a straight line. Top speed is limited to 130 mph, and fuel economy is estimated at 19 mpg city, 26 highway, 21 combined.

The RC 300 features a suspension with double wishbones up front and multi-link in back as well as an electronically assisted power-steering system. The available F Sport package, which costs about $5,000, adds adaptive dampers, a sport-tuned suspension, larger 19-inch wheels, variable-gear-ratio steering, a Sport driving mode, and tweaks to the stability-control system.

Inside the RC 300 are solid, deeply supported, bolstered bucket seats that receive extra stitching with the F Sport package. The front seats look ideal for both spirited and long-distance drives, but the rear seats are little more than a novelty. Anyone but small children would become uncomfortable very quickly. The rear seats do split and fold, which helps, since the RC’s trunk capacity is a somewhat disappointing 10.4 cubic feet.

The cabin itself shows a high-quality fit and finish that Lexus has steadily improved over the past few years. Standard features include leatherette seat upholstery, heated front seats, cruise control, automatic climate control, HD Radio, and Bluetooth. An available Luxury package adds leather, ventilated front seats, rain-sensing wipers, a power-adjustable steering wheel, and a blind-spot monitor. Other options are a premium Mark Levinson stereo, a moonroof, and numerous safety features. Lexus has reportedly improved the available Enform infotainment system, which responds to standard touchscreen gestures via its Remote Touch input pad. However, critics have noted its poor syncing capabilities, and it is not an industry favorite.