Lexus’s slogan for the ES Hybrid is “Efficiency without compromise,” but what if the car they started with is compromised? 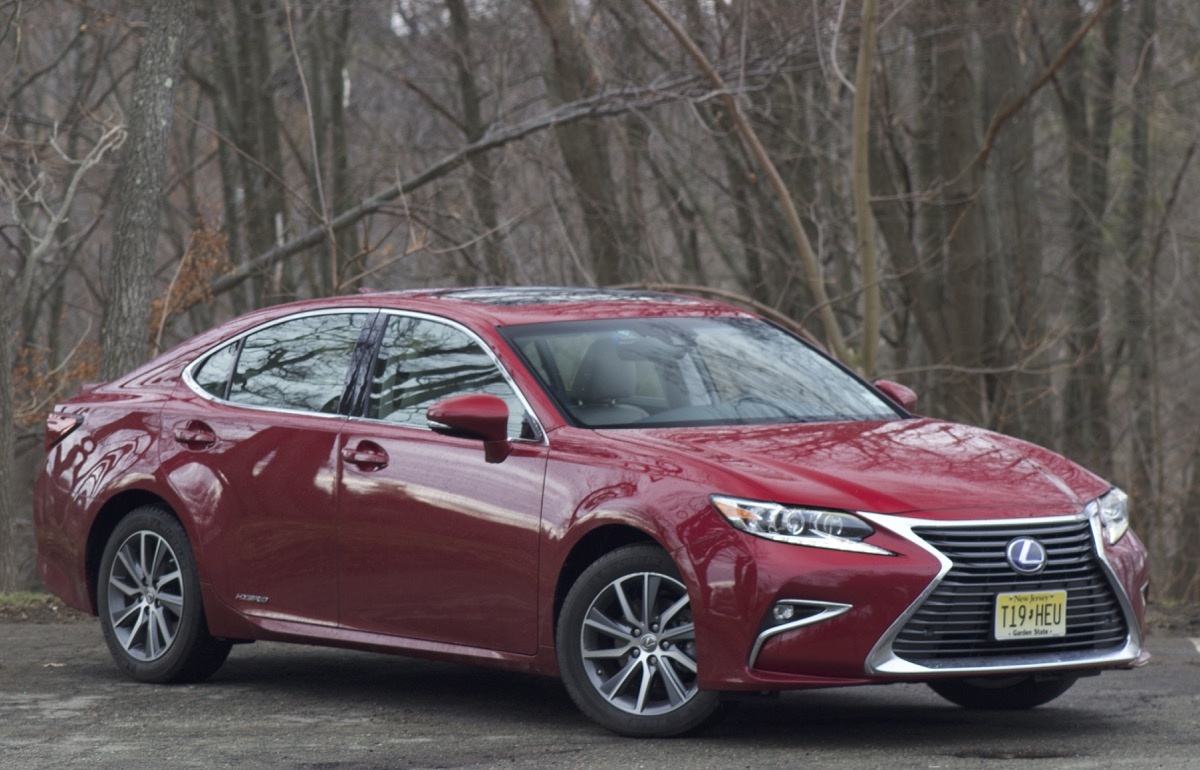 The Lexus ES has a stellar reputation as being an incredibly reliable luxury car. Even as far back as the 1990s, the ES was the ultimate sensible premium sedan. Sure, it’s built on the same platform as the Toyota Camry, but Lexus never shied away from that, and frankly that relationship is a good thing.

Here’s the problem: It’s quite possible the Lexus ES 300h won’t live up to its reputation. It’s reliable and efficient, but the more you examine the car, the more you start to see issues with this hybrid sedan everyone loves to love. The car the ES hybrid is based on, the Lexus ES 350, might not be everything it’s cracked up to be. But is it enough to turn you away from such a popular option? Read on to learn more. 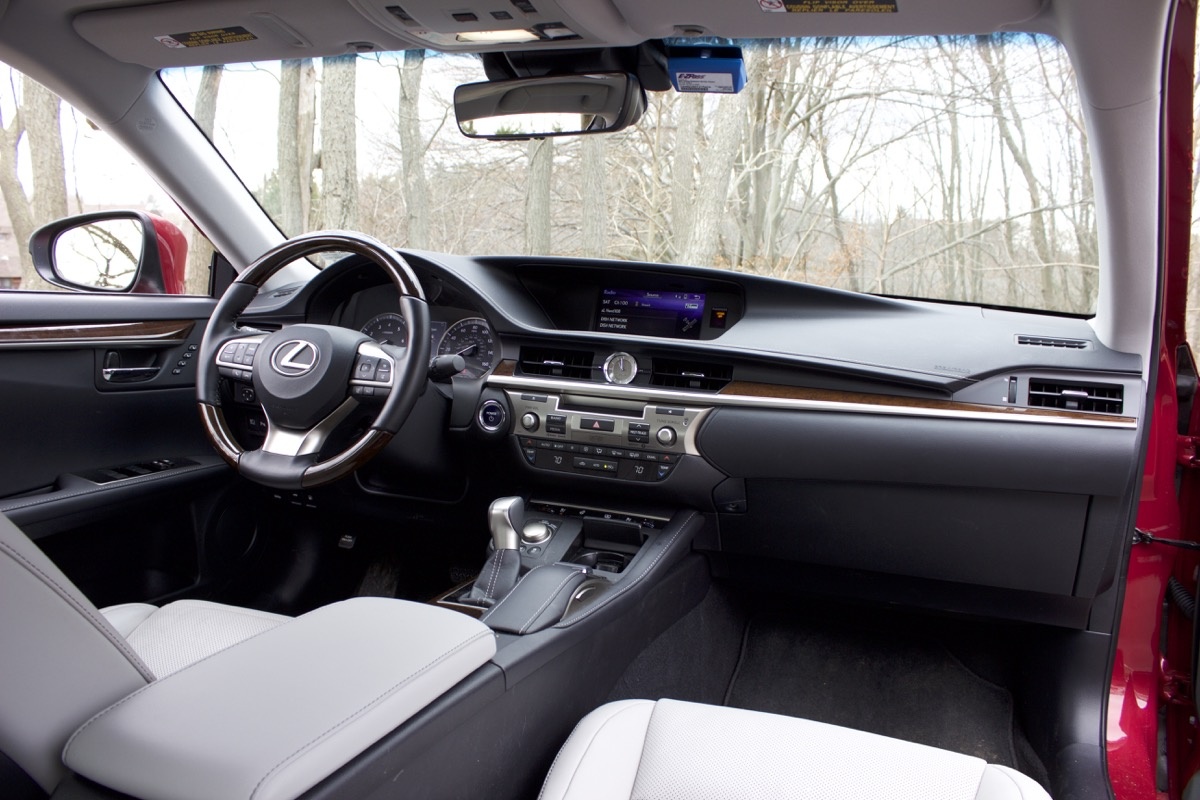 The entire Lexus lineup has some pretty unique styling, but it wasn’t always this way. Lexus has had staid, traditional looks for its vehicles for a long time, and that was frankly just fine. It perfectly matched the soft-driving, sensible nature of its vehicles. The sleepy looks were fine for a car that wouldn’t stand out in a parking lot, but also wouldn’t leave you stranded in one either.

At some point, either car buyers or automotive critics piped up and said Lexus needed to get more exciting. Rather than making many of its vehicles actually more exciting, in 2016 Lexus threw on its garish hourglass front grille, carried over to 2017. But take that away and you still have a sleepy, sensible sedan. If you want exciting, look to the Lexus IS-F or GS-F. But ES might as well stand for “Economical and Sensible.”

Lexus says this sixth-generation ES shares less mechanically with the Toyota Camry than past versions, but you can tell this vehicle and the Camry are on the same platform. And the problem is, if Lexus treats the connection of the two vehicles like a bad thing, it has only Toyota to blame for that. The Camry has gotten cheap in the past few years, and in the context of other, newer luxury cars, so has the ES.

In the past several weeks, I’ve spent seat time in the Genesis G80 and the energetic Jaguar XF. Each shows how Lexus might be mailing it in with cars like the ES, even if those are not direct competitors. The ES's most direct competition comes from cars like the Acura TLX, Buick LaCrosse, Cadillac XTS, and Lincoln MKS. That’s a sleepy set of vehicles. Heck, you’d be forgiven for forgetting half of those cars even exist. The XTS promised luxury but never delivered, and the TLX promised performance and never delivered. In this crowd, the LaCrosse is the most competent and modern offering.

The ES feels cheap at times. Even as I was trying to tell myself I was maybe too critical or just being a hater, I noticed how the front doors feel hollow when you slam them shut. That's an audible microcosm of the car as a whole. 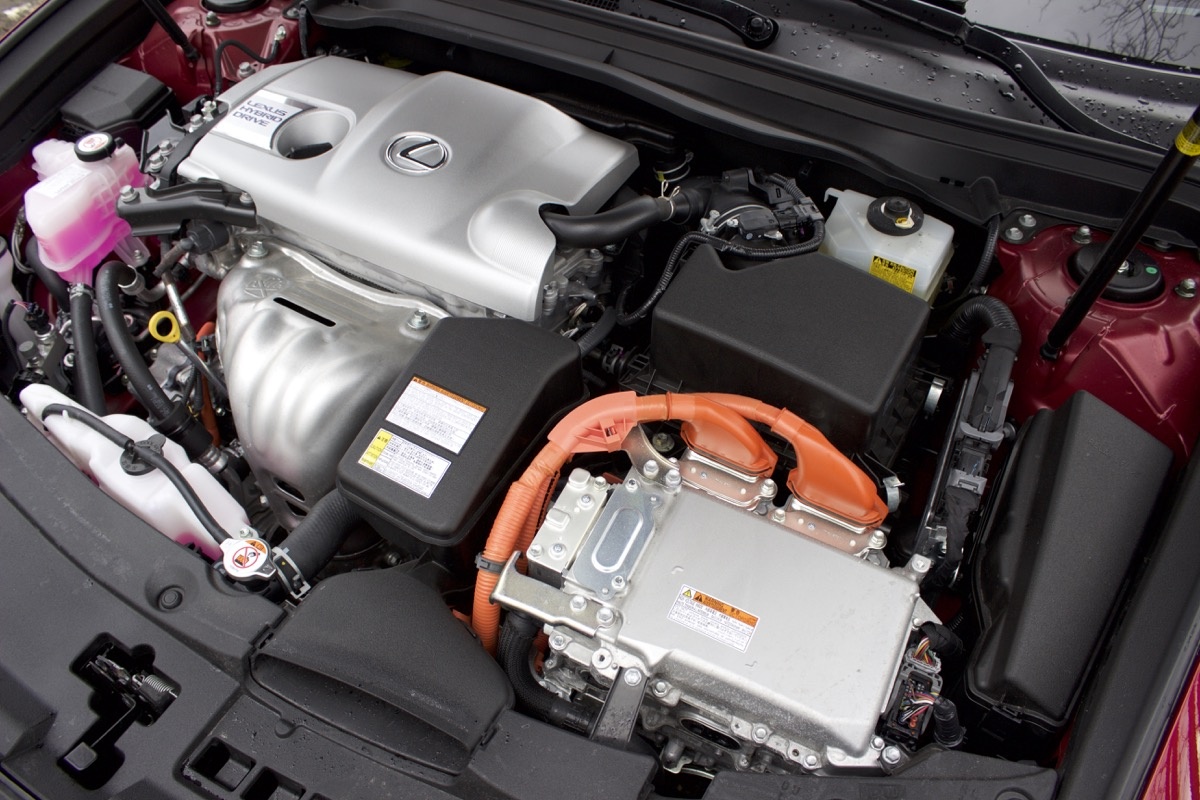 At the core of the ES 300 Hybrid, a 2.5-liter engine works with an electric drive motor to put out a net 200 horsepower. Acceleration is like that of any Toyota or Lexus hybrid- electric, so it feels like an EV at low speeds, and then the motor kicks in.

Acceleration is decent, and the steering feels well weighted, but provides no real feedback. It kind of feels numb. Additionally, the brakes don’t feel very aggressive, perhaps because they're trying to do their regenerative thing. There’s a drive-mode dial in the center, but frankly, it doesn’t do much—Eco, Normal, and Sport are just varying levels of “we’ll get there… eventually.” Lexus claims an estimated 0-60 mph time of 8.1 seconds, but it feels like longer.

The ES's ride can be described as “pillowy” at times, but strangely it's not quite as smooth as you might expect. It feels soft, but doesn’t soak up major bumps in the road.

At least the ES has great fuel economy. EPA estimates for the ES 300h are 40 mpg in the city, 39 on the highway, and 40 combined. Frankly, our driving experience has been right about there, at 38.7 mpg in combined driving, most often in Sport mode. 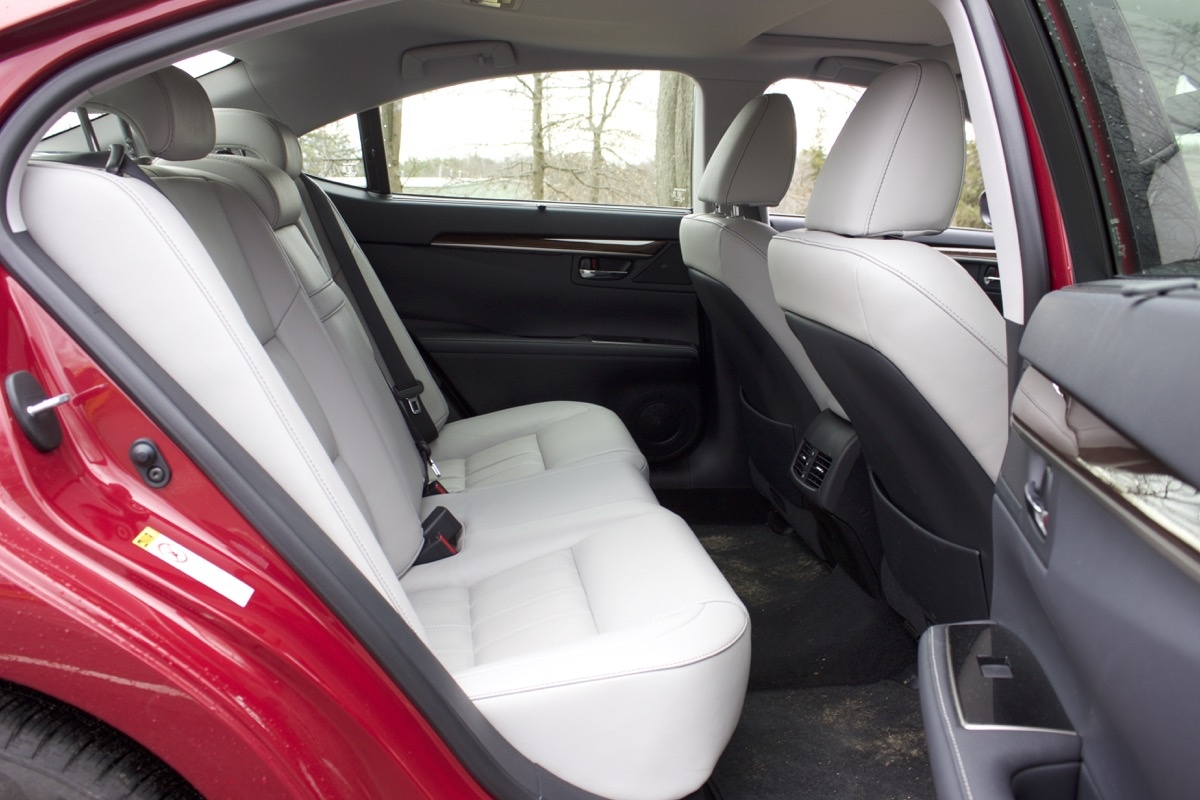 Get behind the wheel and the ES feels cramped, and it’s hard to find an ideal seating position. The seat doesn’t move far back enough, and despite that, the steering wheel doesn’t telescope far enough, either.

It feels like Lexus didn’t consult anyone over 6 feet tall. And if that critique sounds familiar, it's the exact same critique I had in my review of the Toyota Camry. Like the Camry, the rear seat of the ES is pretty spacious, which is surprising considering how tight things are up front.

Past generations of the ES always seemed to have a flowing dash, but Lexus does away with that in this, and it kind of feels cold, but the layout is logical. The separated cupholders feel weird but make sense, and controls for the heated seats, heated steering wheel, and power rear sunshade are all easily reachable.

Also, while car interiors are becoming pretty wild from a design and layout standpoint, at least Lexus had the sense to keep traditional dials for the volume and radio tuning. 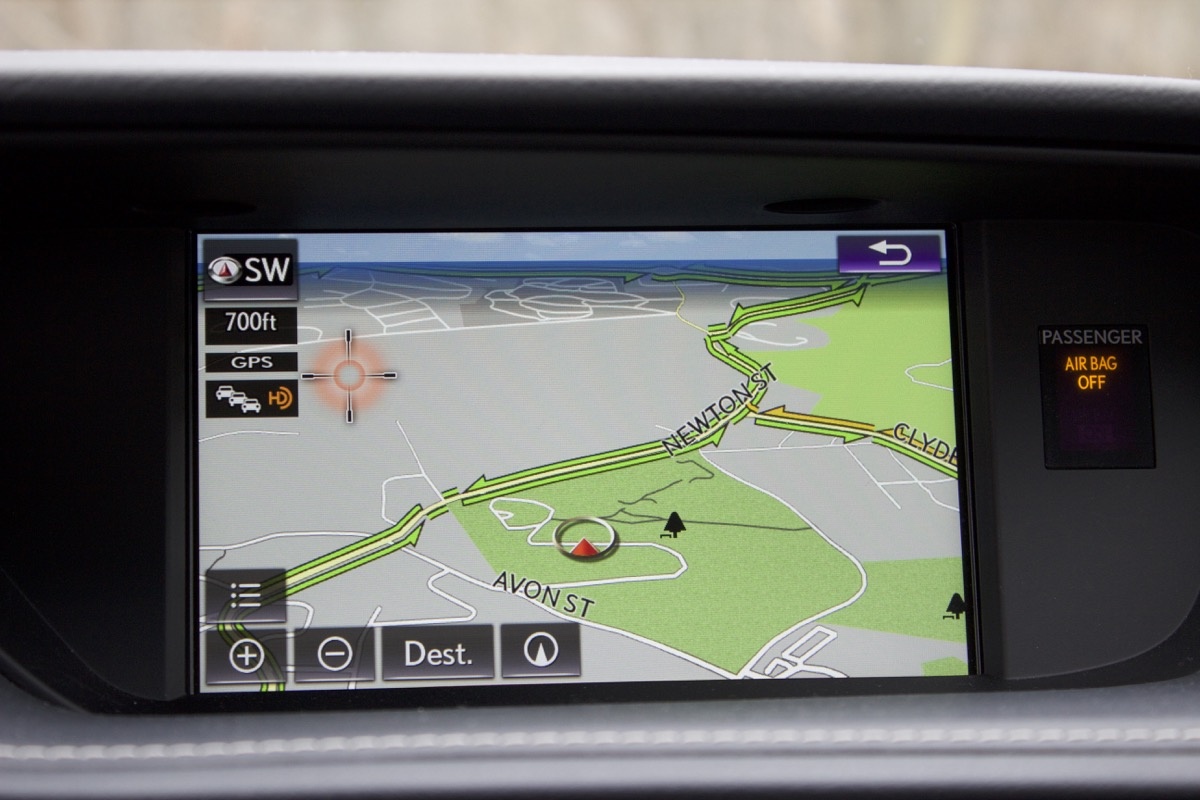 For most of the in-car controls, look to the screen in the center of the dash, operated via the Remote Touch controller. Although an actual touchscreen would be better, Remote Touch is actually pretty good compared to other luxury infotainment systems like BMW's iDrive or Mercedes-Benz's COMAND.

Remote Touch gives you a free-floating cursor and some easy-to-remember buttons on the controller for Home, Menu, scrolling, and more.

Our test model has the added navigation and Mark Levinson sound system package. This is a nearly $2,600 option and delivers very crisp stereo quality.

Other options include LED headlights, a one-touch power trunk, Intuitive Parking Assist, a heated wooden leather-trimmed steering wheel, and more. What stands out to me is that these feel like they should be standard features in any luxury car. 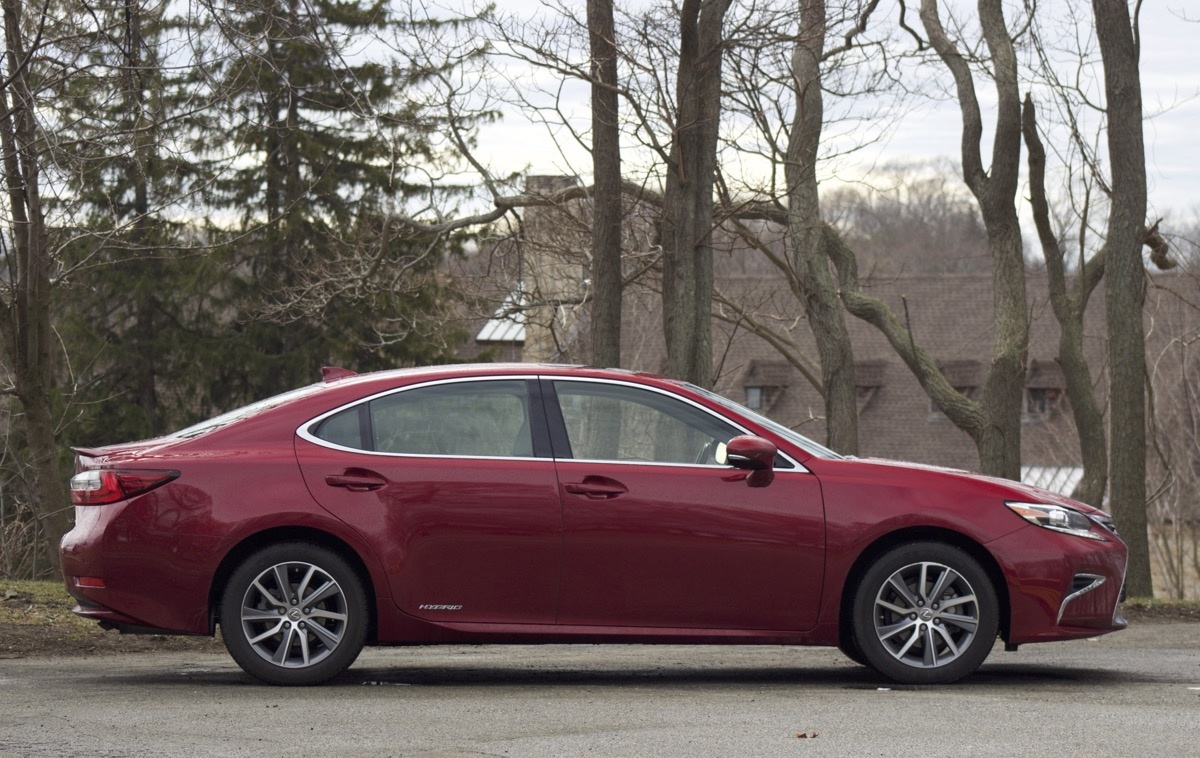 When it comes to safety, the ES 300h delivers, with Lexus Safety System+ now standard. This system includes a Pre-Collision System with Pedestrian Detection, adaptive radar cruise control, intelligent high-beams, and lane-departure alerts with steering assist. That's an incredible amount of high-tech safety gear that comes standard. Parent company Toyota now offers the same gear standard on the Camry, so it would seem strange not to offer it all as standard on the ES, too. This package is the strongest case for buying an ES Hybrid.

Other standard safety features include a full complement of front and side impact airbags, traction control, the LATCH child-seat anchoring system, and front and rear crumple zones.

The ES 300h has impeccable safety scores, earning a best score of Good in all phases of testing for the Insurance Institute for Highway Safety (IIHS). It also earned a Top Safety Pick+ accolade from the IIHS and a top rating of Superior for front crash prevention and avoidance. The ES hybrid also earns a 5-star overall crash rating from the National Highway Traffic Safety Administration (NHTSA). 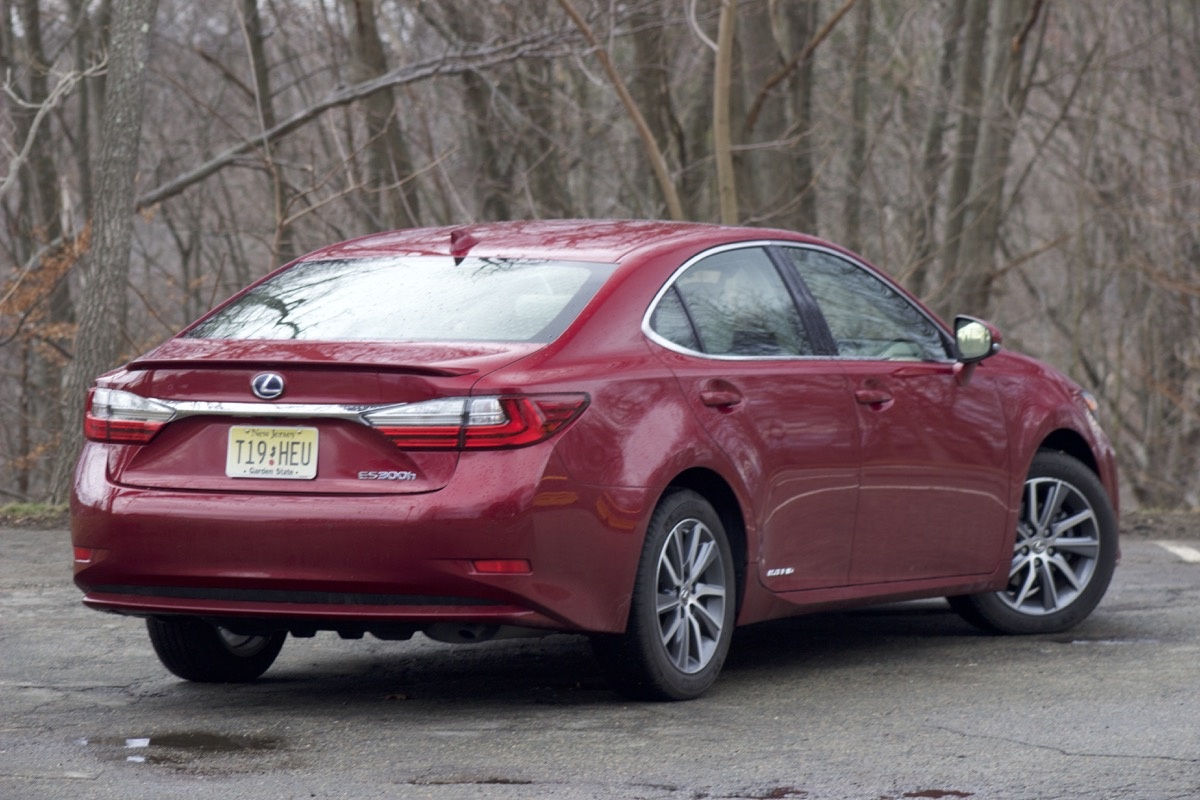 The base price of a 2017 Lexus ES 300h is $41,820. Our test car also featured the options mentioned above and the Ultimate Luxury Package, featuring heated/cooled seats, a panoramic sunroof, rear sunshades, wood trim, and power tilt/telescoping steering wheel, and its price came in at $51,005.

Consider that for a moment—a tilt/telescoping steering wheel as an option on a luxury car? It’s indicative of what the ES is. The ES has strong reliability numbers, and our ES hybrid returns great fuel economy, but it at times feels like an empty suit.

If no-nonsense commuting is what you desire and your tax bracket demands you get something more expensive than a Camry, the ES 300h is an option. But for the same price, you can get a Genesis G80 and have a car that's not only nicer, but a heck of a lot more fun to drive.

How To Put A Dealer Review

I have a very bad experience with one dealer

Does a 2017 lexus e300h have auto shutdown if left running