Yes, the Land Rover Discovery is expensive. But no other 7-passenger vehicle is as capable and as luxurious. 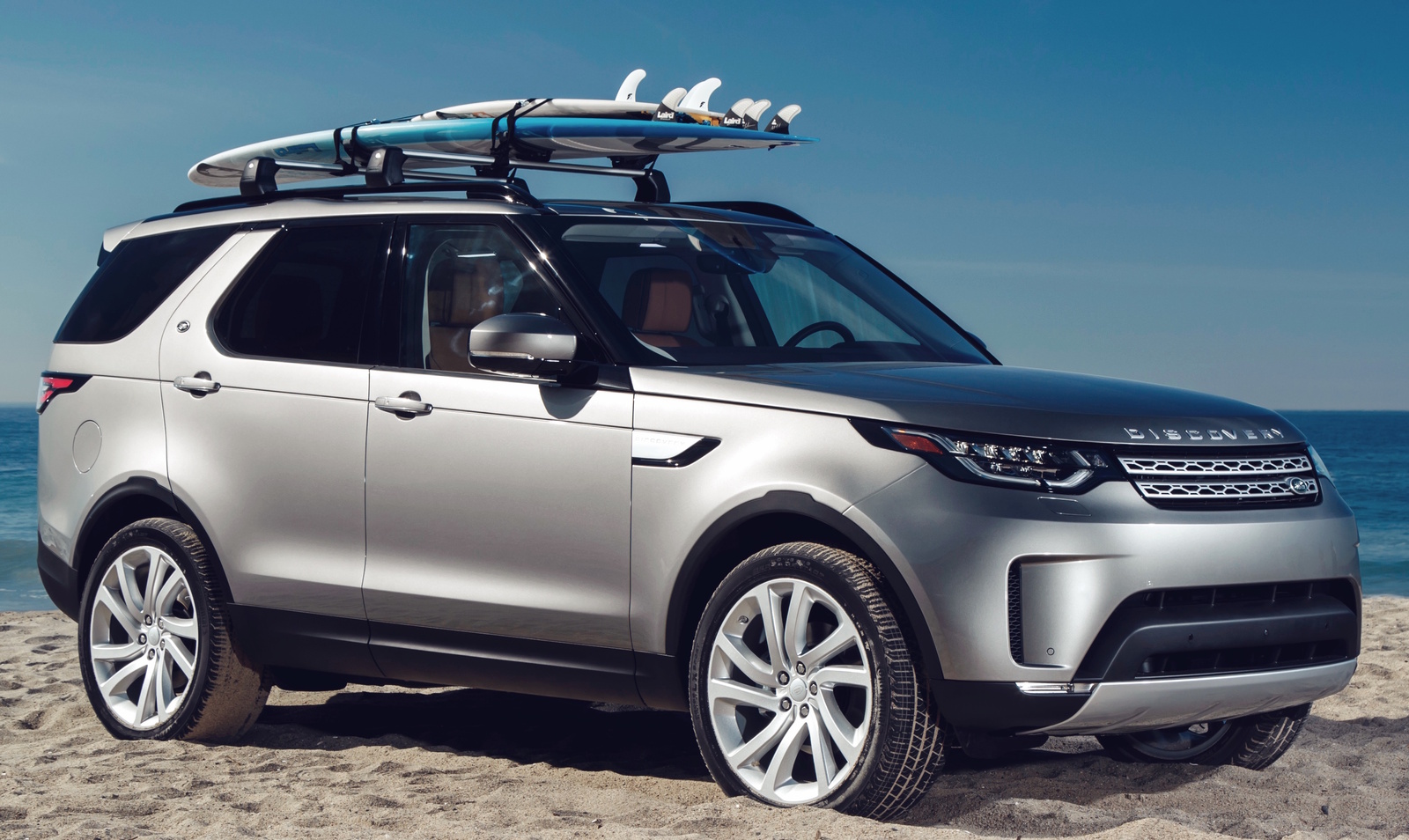 Just because a vehicle is expensive doesn’t mean it can’t be a good value. Case in point: the all-new 2017 Land Rover Discovery.

It’s a luxury SUV that handles like a sedan, fits more stuff than a crossover, and still goes off road like a Land Rover. Even at its $49,990 base price, it comes well equipped with a panoramic glass roof and plenty of wood and leather. But step up to a more well-equipped model and you’ll get seating for seven, the latest safety technology, and better gas mileage than you might expect—all for around $65K.

How is that possible? Well, an all-new unibody construction with lightweight aluminum components certainly helps. So does a new, optional diesel engine that’s good for 21 mpg city and 26 highway.

The Discovery isn’t for everyone—its looks are polarizing, its gas engine guzzles fuel, and its infotainment system can be infuriating. But if you need lots of room and don’t want to spend more on a truly massive Escalade, Navigator, or well-equipped Suburban, it’s a great choice. 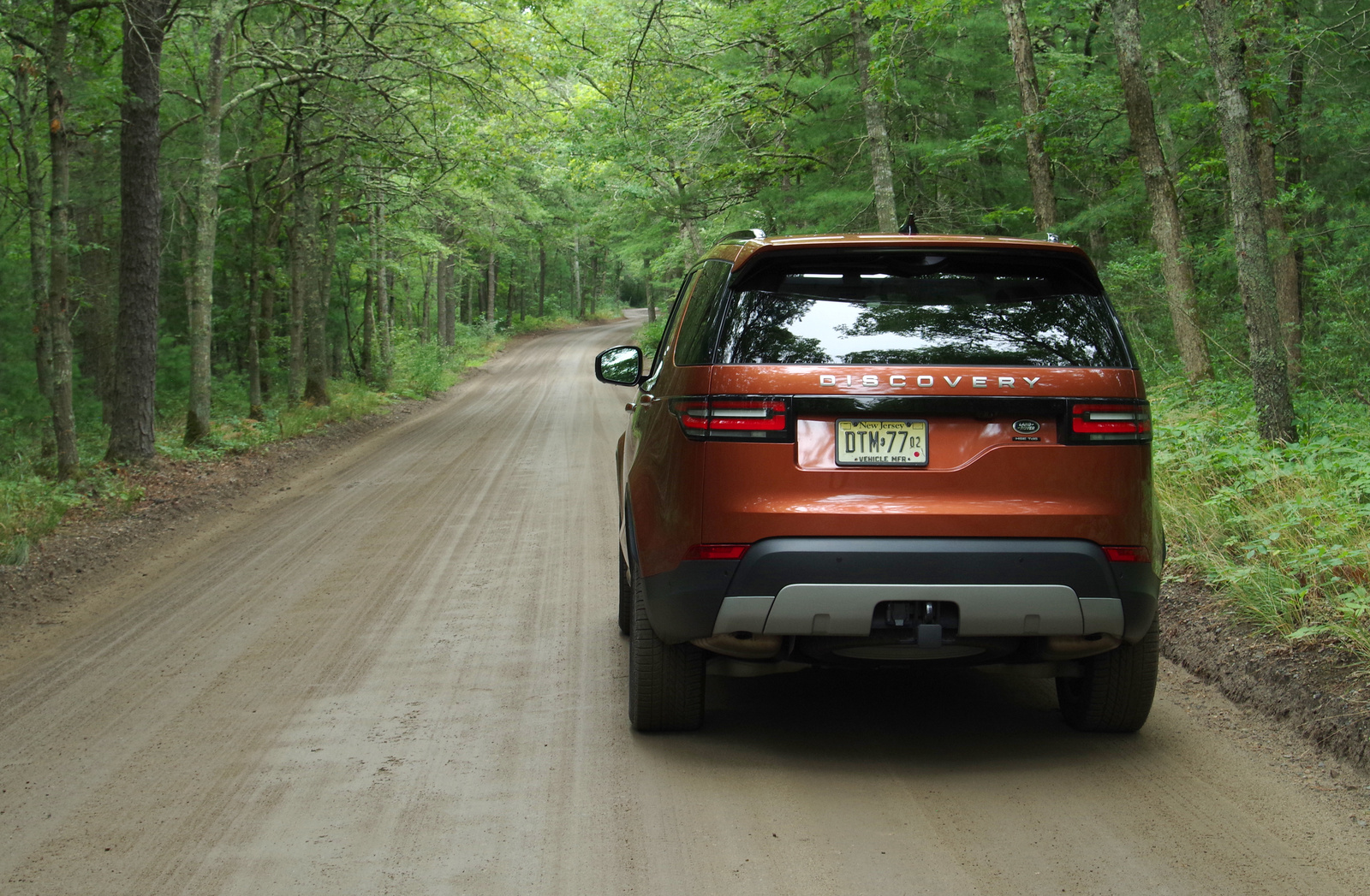 The Discovery replaces the outgoing Land Rover LR4 and marks the return of the Discovery nameplate to the U.S. after a 13-year absence. (In other markets, Land Rover badged both the LR3 and LR4 as Discoverys.)

Unlike the boxy, utilitarian LR4, the new Discovery is a lot more streamlined. It sports a tall roof, long hood, and low beltline to maximize interior space and improve its center of gravity—but the resemblance to a pair of Chuck Taylor high tops is uncanny.

From the rear, an asymmetrical rear window with a side-mounted license plate frame looks awkward—but it’s a nod to the past. The original Discovery’s rear-mounted spare tire required such an off-center setup. And even though the new vehicle’s tailgate is no longer split, it still opens to reveal a fold-down shelf where the driver can change from muddy boots to driving shoes.

If you can get past the Land Rover’s looks, however, you’ll find an interior that’s full of understated luxury. Wood trim and leather seats come standard, as does a panoramic glass roof. You can upgrade to Windsor leather, optional exotic wood trims, and a sunroof that slides open to let in fresh air.

Underneath all that is a boatload of engineering genius. The Discovery is full of weight-saving materials, including lightweight aluminum in the frame and a tailgate that’s made of a durable composite.

And unlike the body-on-frame LR4, the 2017 Discovery’s unibody construction means it’s both stronger and stiffer, even though it weighs about 800 pounds less than the old car. 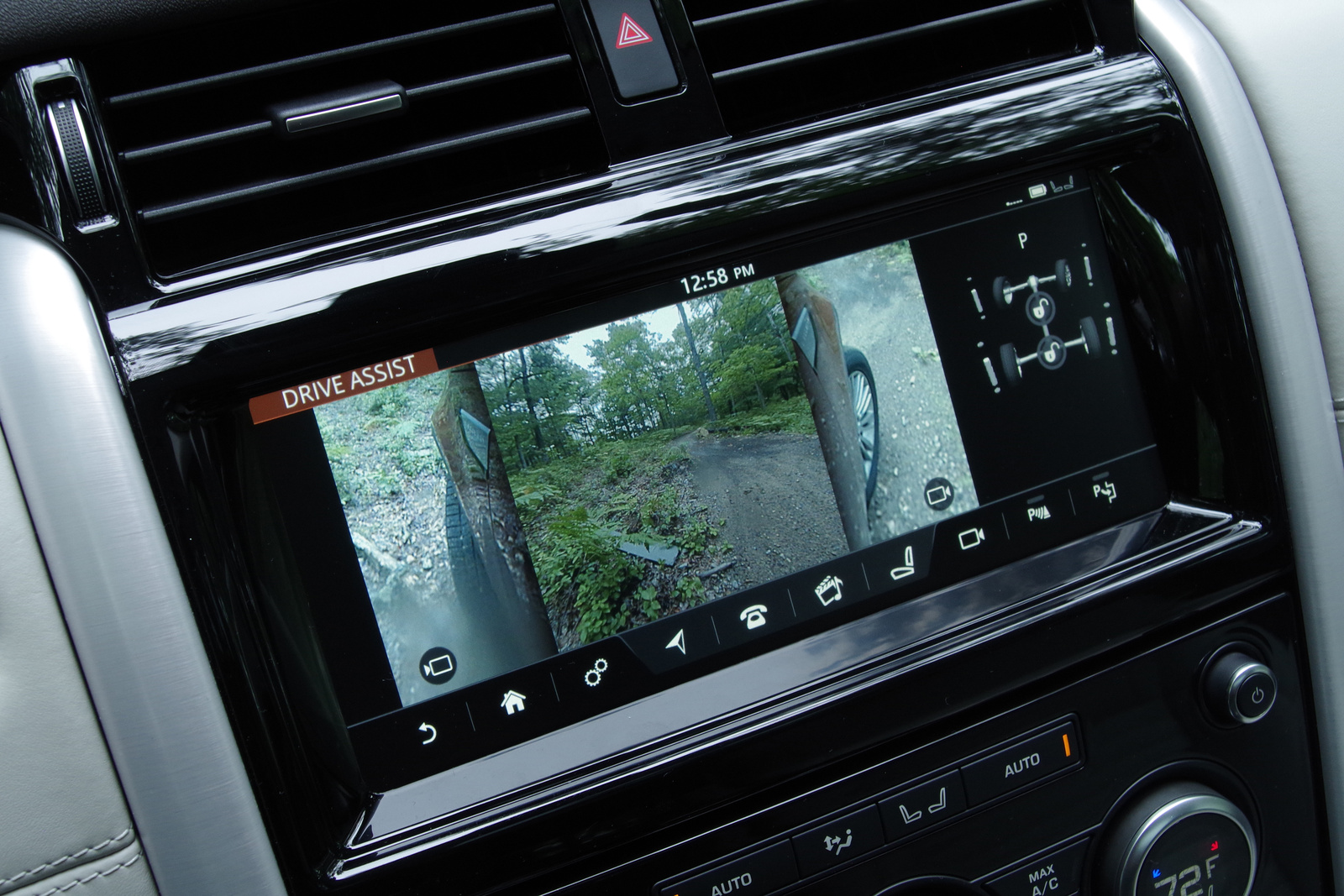 Where the LR4 drove like a galleon, the Discovery does little to reveal its size from behind the wheel. Thanks to the new design, the 3.3-ton Discovery handles like a much smaller vehicle. Equipped with independent front and rear suspensions, it glides over road imperfections. Steering is relaxed enough for comfortable highway cruising, but it’s nimble enough to take a tight corner at speed.

The standard engine is a 340-horsepower supercharged gasoline V6 that Land Rover says can do 0-60 in just 6.9 seconds. That’s an astounding feat for a car of this size, but its other specs are nothing to brag about: You’ll get only 16 miles per gallon in the city and 21 on the highway.

Thankfully, there’s another choice—an optional 254-horsepower 6-cylinder diesel. This all-new engine is good for 21 miles per gallon in the city and 26 on the highway, but it’s still as quiet as a gas engine, and it adds only a $2,000 initial price premium over the gas engine.

Although it slightly decreases the Discovery’s towing capacity from 8,201 to 7,716 pounds, the diesel has plenty of power—even when accelerating at highway speeds. And off-road, it makes more low-end torque. That gives the driver more low-speed control to help the Discovery get over obstacles and out of tricky terrain.

Land Rover claims the Discovery has a ground clearance of 11.1 inches and can drive through water that’s nearly 3 feet deep. We didn’t put those claims to the test, but many dedicated off-road enthusiasts have.

The optional Terrain Response 2 system will automatically adjust throttle speed, gear changes, and even vehicle height to match whatever surface you’re driving on. Or you can leave it in Auto and let the vehicle decide for itself.

Or you can use optional All Terrain Progress Control. This system acts like cruise control for when you’re not on a road: It automatically crawls over rocks, down steep grades, and through snow. All the driver has to do is steer.

The Discovery will also help you tow. If you order the optional hitch with Trailer Stability Control, it will do its best to keep your trailer headed in the right direction in crosswinds and at highway speeds. Optional Advanced Tow Assist helps the driver reverse a trailer without jackknifing. Just steer the trailer using the Terrain Reponse controller, and the infotainment screen will display guidelines showing where it’s headed. 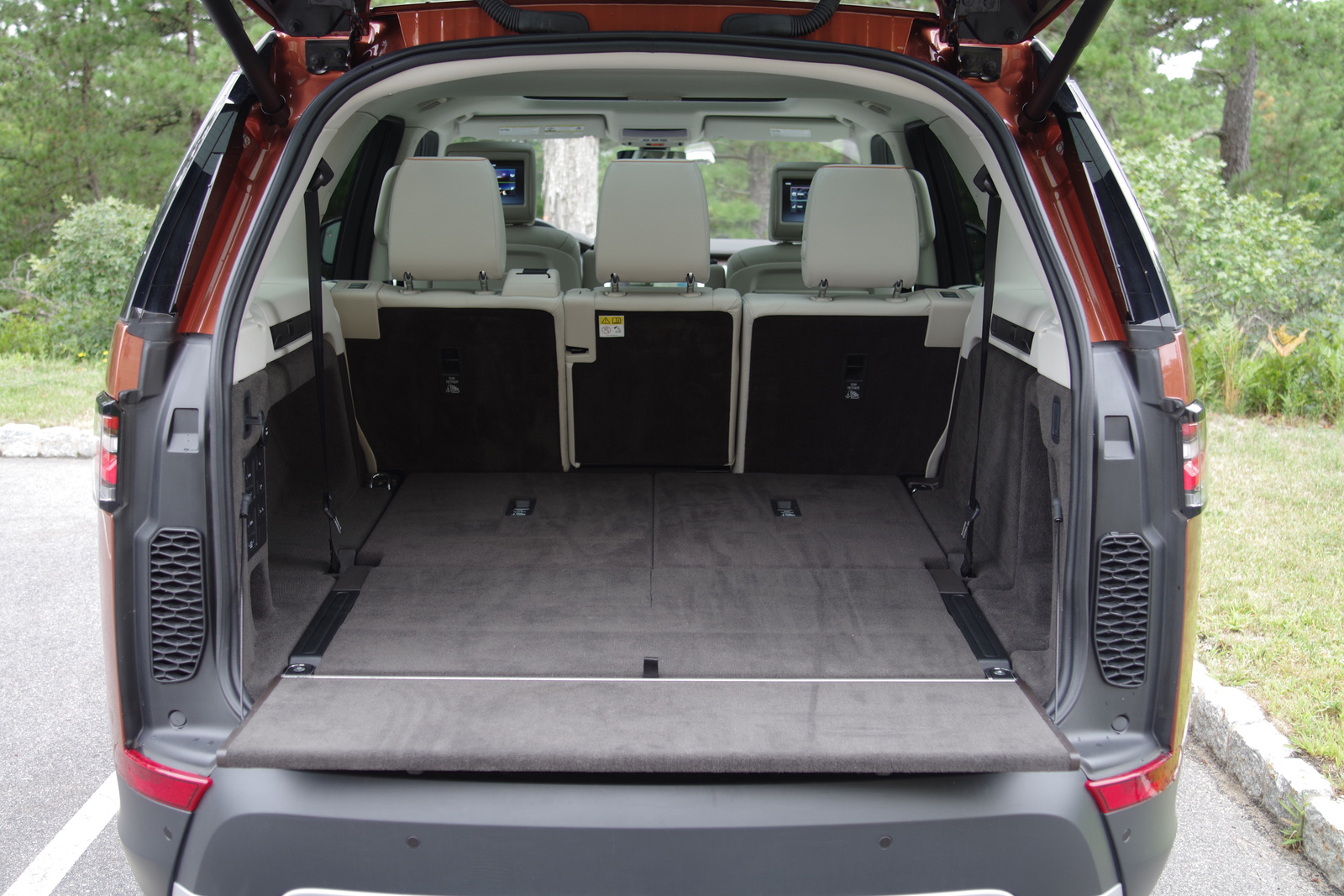 Whether you’re hauling people, cargo, or both, the Discovery sure is spacious. The second row has limousine-like levels of legroom, while the third row can actually fit two full-size adults. Equipped with an air suspension, the Discovery can lower itself closer to the ground for easy access.

Both second and third rows can fit two car seats each, although larger bases may not fit comfortably. In all three rows, the Discovery has a ton of nooks and crannies for storage. You get two glove boxes, multiple hooks to hang groceries or handbags, chilled storage in the center console, and up to nine USB outlets. A hidden storage compartment behind the climate controls would be a perfect place for a smartphone, but it oddly lacks a USB port.

The Discovery we tested featured power folding second and third rows, which can be folded down all at once or individually. It offers only 9.1 cubic feet of cargo space with all three rows up, but that grows to 45 cubic feet when you drop the third row and 82.7 cubic feet total.

That’s in the middle of the pack among large SUVs—it's more space than the more affordable Audi Q7 and Lexus GX 470, but a lot less than a full-size Suburban or a Mercedes GLS.

But only the Discovery comes with the option to fold its seats with buttons behind the tailgate, from the touchscreen up front, or remotely with an app on your phone.

The powered seats don’t take as much muscle to move, but they do require some forethought: First, you must make sure the belts are unbuckled, or the seats won’t move. A stray toy is enough to stop them from moving, too. They move slowly, and you still have to manually slide the second row forward to access the rear seats. 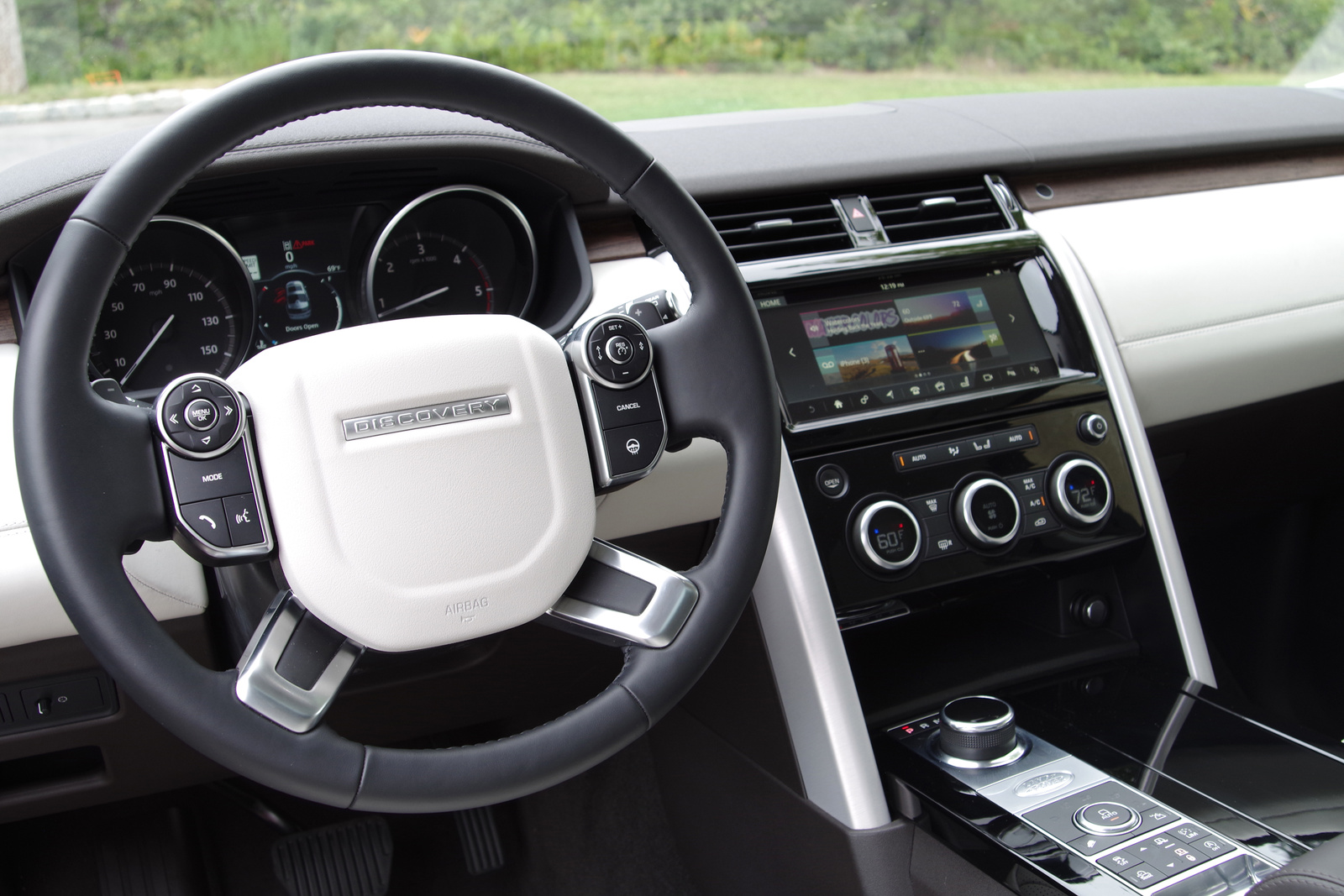 If you expect to have to shuttle backseat passengers, you can order the Discovery with optional rear-seat entertainment. In addition to viewing the navigation system (no more “Are we there yet?”), rear passengers can connect a device through an HDMI cable or listen to wireless headphones.

You can also order the Discovery with what Land Rover calls an “Activity Key”—a waterproof bracelet that unlocks the doors—so you can leave your keys in the car while you explore.

Unfortunately, neither Apple CarPlay nor Android Auto is available. These popular options let drivers avoid the quirks of an automaker’s own navigation system by plugging in their smartphones and using the apps they already know.

If you buy a Discovery, you’ll have to learn the quirks of Land Rover’s own infotainment system. Although it’s more complex than iOS or Android, the interface is a lot better than the awful touchscreen in the old LR4.

InControl TouchPro can run select apps off the driver’s phone and also offers a phone app for remote vehicle monitoring and service reminders. 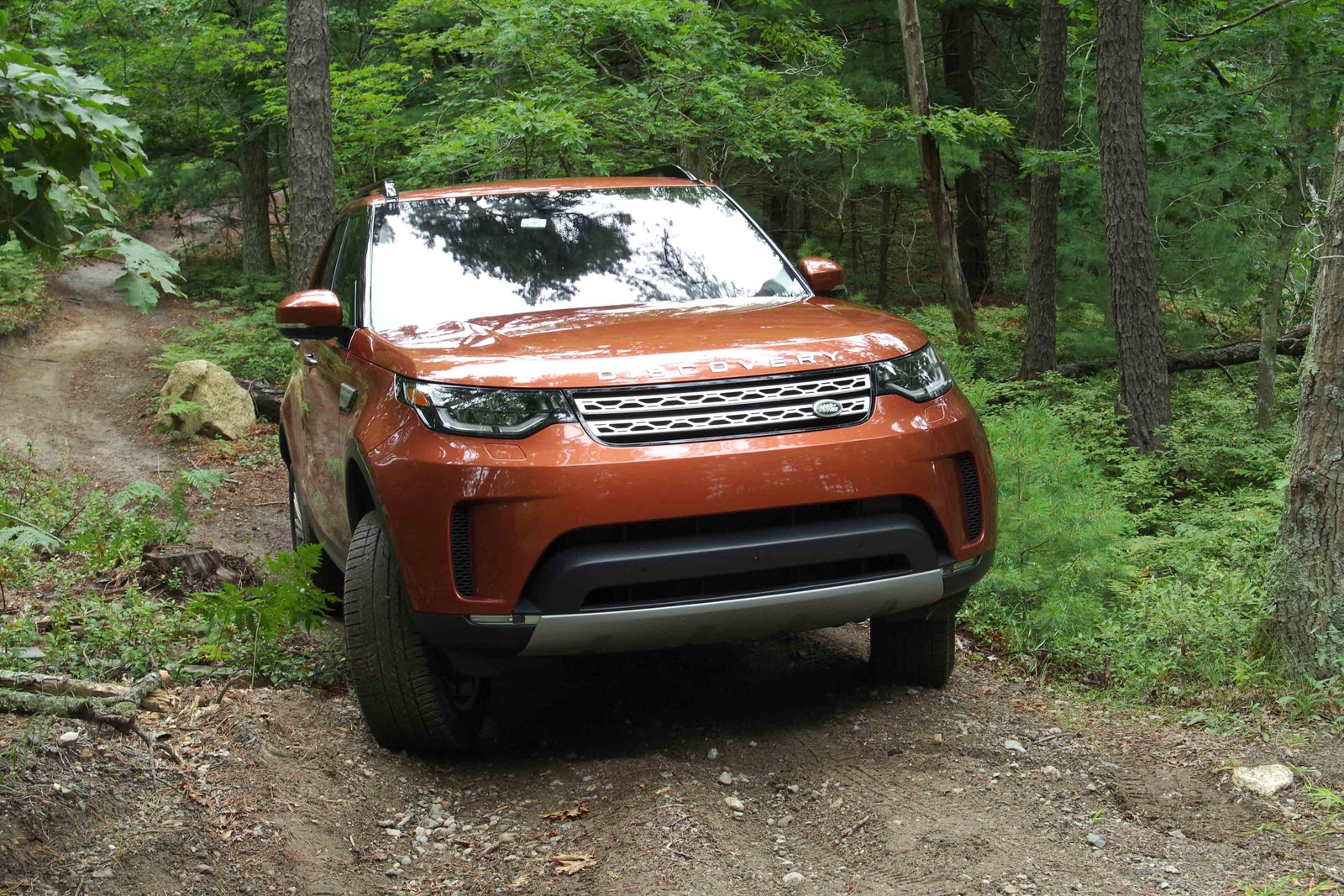 Neither the National Highway Traffic Safety Administration (NHTSA) nor the Insurance Institute for Highway Safety (IIHS) has rated the 2017 Land Rover Discovery. However, it comes standard with front, side, and curtain airbags that will also deploy in a rollover crash.

As long as you step up to the HSE model, you can order the Discovery with a number of active safety features. However, they’re always optional. 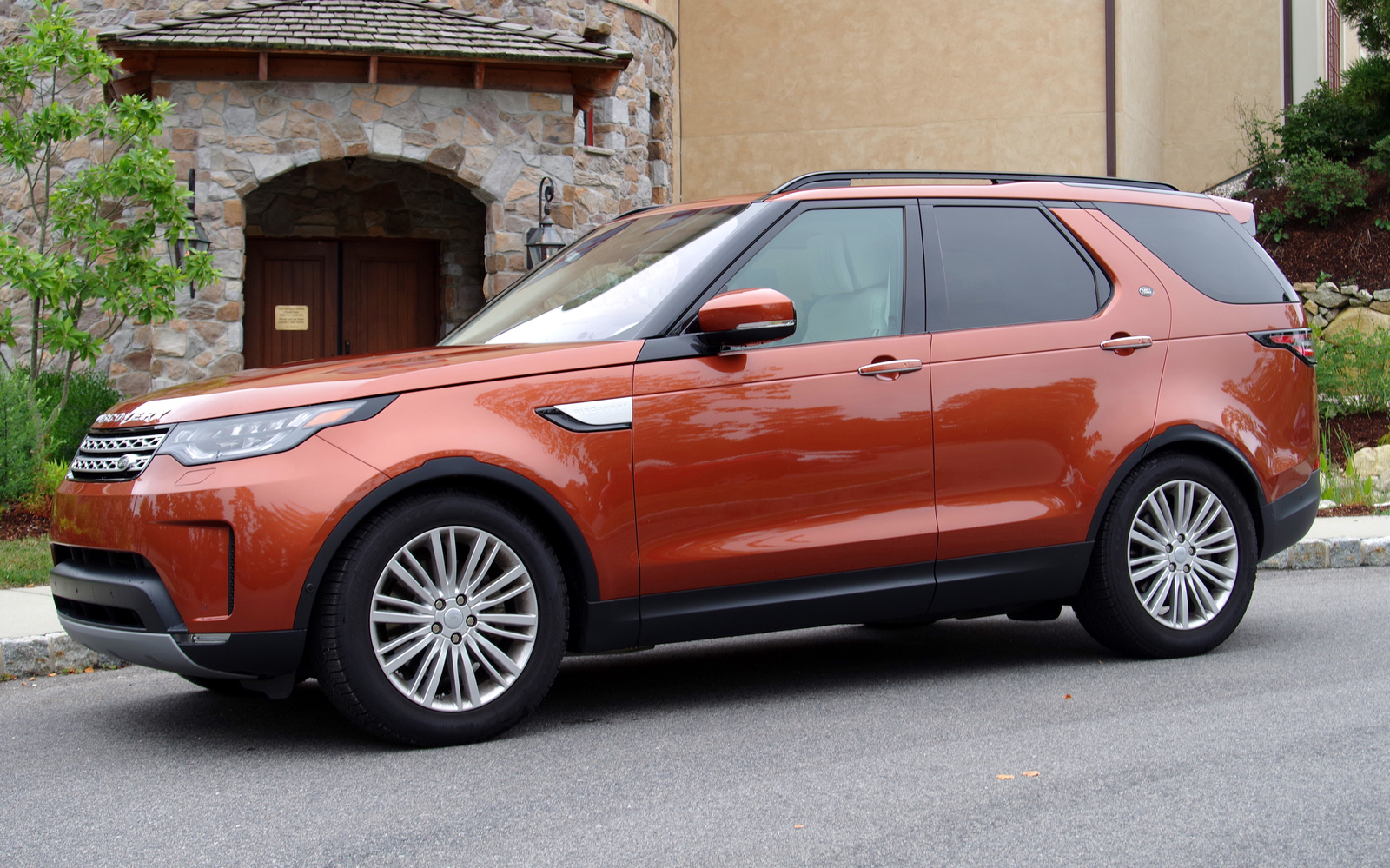 If you’re shopping for a 7-passenger luxury SUV, the 2017 Land Rover Discovery might be a great fit. But make sure you know what you’re buying. For instance, the gasoline engine gets only 16 mpg in city driving. And even though Land Rover has a much better track record for reliability these days, the Discovery’s warranty is good for only 4 years or 50,000 miles.

It’s also unlikely that you’ll find a Discovery for that starting price of $49,990. Nearly every SE on dealer lots comes with optional 7-passenger seating and the Capability Package, which adds Terrain Response 2. Realistically, you should expect to pay around $54,000 for an entry-level vehicle. However, the diesel engine isn’t available on the SE—and neither is blind-spot detection.

The HSE remedies those issues and also adds LED headlights, parking assist, navigation, 20-inch wheels, and an upgraded sound system. Without any extras, it starts at around $57,000. The diesel engine adds $2,000 to the purchase price.

The top-of-the-line HSE Luxury starts at $63,950 and adds a standard electronic air suspension, three-zone climate control, and an awesome 14-speaker sound system. With a diesel engine and all the options—including massaging front seats and 22-inch wheels—it maxes out well under $80,000.

Yes, the Land Rover Discovery is expensive. But if you’re looking for a 7-passenger luxury SUV with plenty of room for cargo and the ability to tow and go off road, no other vehicle can come close.

What's your take on the 2017 Land Rover Discovery?

Regina We had a seat fire in our 2017 Disco 3rd row. I have a picture but I'm not sure how to post it here. we had 3 kids in the car and there was a faulty seat heater. Luckily no one was hurt, but Land Rover isn't recalling the seat. The engineers said it was specific to just our car. We had been driving on a short 15m ride across town. Had it been 20m it would have ended badly. We're very lucky. Buyer beware. LR did almost NOTHING to keep us happy in this process either. They are even bragging about having paid for our loaner car!! WOW! Thanks for the loaner! Try harder Land Rover.

Have you driven a 2017 Land Rover Discovery?
Rank This Car

When Is The First Service For The Discovery? 10k Or 15K?

When I pull into automatic car wash where one wheel rides on track in neutral - I can’t slip into drive when need be?