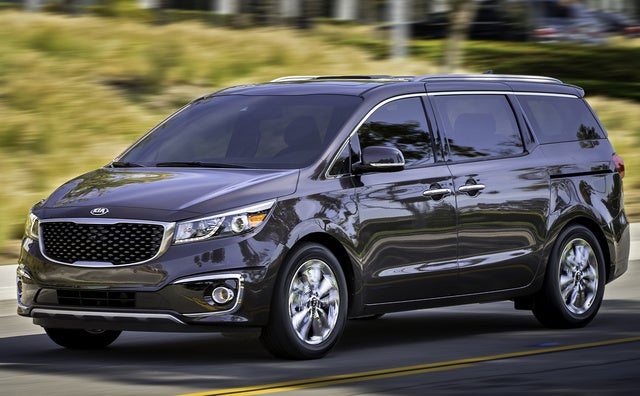 Known in other parts of the world as the Carnival, the Sedona has been Kia’s offering in the minivan segment since the late 1990s and has steadily improved to the point that it’s now a viable competitor to Japanese peers like the Honda Odyssey and Toyota Sienna, as well as domestic favorites like the Dodge Grand Caravan. The third-generation Sedona only just came out for the 2015 model year, so the 2017 model remains largely unchanged. Available trims include the EX, L, LX, LX Plus, Limited, and SX, and you can spend anywhere from $27,000 for a base Sedona all the way up to 40 grand for a loaded SX.

The 2017 Kia Sedona comes with a single drivetrain, since most minivan buyers are more concerned with what’s happening in the passenger area than under the hood. The engine is a 3.3-liter V6 taken from the Sorento crossover and the Cadenza sedan, making 276 hp and 248 lb-ft of torque. The Sedona is front-wheel-drive only and the sole transmission is a 6-speed automatic. The power is adequate for the 4,414-pound minivan, but the Sedona won’t be winning any drag races. It's also rated to tow up to 3,500 pounds, but adding a full load of cargo and passengers on top of that will probably make it hard for the Sedona to get out of its own way. Fuel economy is an unremarkable 18 mpg city/25 highway.

The Sedona has a strut suspension in front and a multilink suspension in the rear; higher trim levels have electric power steering, while lower trims make do with hydraulic steering. Base trims come with fairly basic 17-inch wheels, but some of the higher trims get flashier rims or even 19-inchers.

A minivan is all about what’s going on inside, whether it’s keeping passengers entertained or packing a vacation’s worth of luggage and gear. The Sedona is reportedly extremely quiet on the road, thanks to Kia’s dedication to sound deadening. Seating is of course ample, with room for up to eight people, although the third-row seats are fairly small for a minivan and probably best reserved for the youngest children. Many versions have “Slide-n-Stow” seating, with which the middle-row seats can slide forward and flip up onto their bottom cushions. The SX-L Sedona has lounge seating with leg rests and nicer headrests. Third-row seats split 60/40 and fold flat into the floor.

The Sedona isn’t the roomiest minivan on the market, especially compared to the aforementioned Odyssey and Sienna, but it does have lots of handy storage for smaller items, including a very big front center console, as well as storage bins near the doors and the dashboard. There are also several USB ports and higher trims get 115-volt outlets.

Safety is a priority for family vehicles, and the 2017 Kia Sedona comes standard with brake assist and hill-start assist, in addition to cornering brake control and rollover mitigation. It has received a 5-star crash rating in federal testing and top Good scores all around from the Insurance Institute for Highway Safety, enough for a Top Safety Pick distinction. The Sedona comes standard with a rear-view camera, and the SX Limited gets a surround-view camera for a 360-degree view while parking.

As is the case with pickup trucks these days, it’s surprising how much money you can spend on a minivan, especially when it has a Kia badge up front. Up to 40 grand for a loaded flagship trim seems like a lot of money, and it is; but when you consider the sheer mass of a vehicle like this and all the convenience features it comes with, the price tag doesn’t seem like such a bad value after all. Crossovers have taken a lot of customers away from minivans over the years, but the unbeatable interior volume of a minivan means it will always have an appeal, and the third-generation Sedona is as good a choice as any among the people carriers on sale today.

Users ranked 2017 Kia Sedona against other cars which they drove/owned. Each ranking was based on 9 categories. Here is the summary of top rankings.

Have you driven a 2017 Kia Sedona?
Rank This Car

Why Does My Van Have A Sweet Smell?

My 2017 Kia Sedona has developed a sweet smell whenever we arrive home and turn off the engine. That normally indicates a coolant leak, at least that's what I have been reading. I checked my coolan...

Want to put mud tires on my Sedona. Do they go on front or back