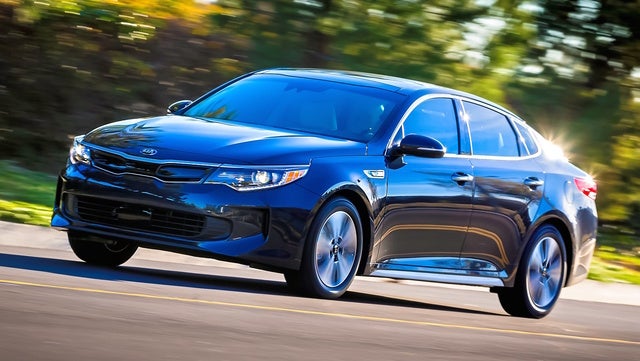 Although the price of gasoline has dropped, and sales of hybrid vehicles along with it, Kia remains committed to providing its customers with green options. In that regard, the 2017 Kia Optima arrives with an all-new drivetrain. Kia improves upon an already very impressive Optima Hybrid, with a new design that also allows for a plug-in hybrid version of the vehicle.

Jumping right to the good stuff, Kia expects the new 2017 Optima Hybrid to improve its fuel efficiency by about 10% over the outgoing 2016 model. That could EPA-estimated fuel efficiency of over 40 mpg across the board (city, highway, combined), impressive for a spacious 5-passenger vehicle with this much style and flair. The Optima’s CO2 emissions may also dip down to around 220 grams per mile. It is even possible that the EPA smog rating for the Optima will move from a 9 to a 10. With gasoline near $2.00 across most of the U.S. at the time of this writing, the more impressive number for the Optima Hybrid may be its cost for fuel per mile, which stands at 5 cents, meaning it's as inexpensive to drive as many battery-electric vehicles in some key markets.

To make the jump to 40 mpg on the Optima Hybrid, Kia has had to make significant changes to the vehicle. The Hybrid will adopt the fourth-generation Optima design from the 2016 non-hybrid models, with the attractive styling and interior upgrades reviewers loved. The body also has some very subtle but important enhancements. Up front, active grill shutters improve highway fuel efficiency while still allowing for proper engine cooling. Out back, the tailpipe is shrouded for better air flow. The wheels are more aerodynamic, as are the corners of the rear bumper and rear air diffuser. The upshot of all these small tweaks is a 0.24 drag coefficient that Kia claims is the lowest in the segment.

Of course, the 2017 Kia Optima Hybrid’s drivetrain has also been improved. A 2.0-liter 4-cylinder replaces the outgoing 2.4-liter engine, but power remains about the same, at an estimated 155 hp. The electric motor, however, is now rated at 38 kW instead of 35kW. As with all hybrid electric vehicles, the electric motor’s torque at low RPMs helps make the Optima Hybrid more responsive in around-town driving. The engine is coupled to a 6-speed automatic transmission, which is a little unusual, given that hybrids normally adopt continuously variable transmissions (CVTs) to squeeze out extra fuel efficiency. Those who want a hybrid but not a CVT may find the Optima Hybrid to be the best of both worlds. Rather than a torque converter and engine starter motor, the electric motor is coupled directly to the gas engine with a clutch. Kia promises that the transitions from electric drive to supplemental electric support or gasoline-only power will be smooth and seamless.

Kia has also made significant changes to the Optima Hybrid's battery pack. The new battery has a 13% larger capacity, at 1.62 kWh, enabling the vehicle to recapture more energy through regenerative braking. And unlike in most hybrid sedans, the 2017 Optima Hybrid’s battery is now seamlessly packaged below the trunk cargo floor, meaning it does not intrude upon trunk space. The new battery placement also allows the rear seats to split and fold 60/40-style.

Midsize sedans tend to be family cars, and the 2017 Kia Optima Hybrid will be among the safest vehicles on the road. The Insurance Institute for Highway Safety has given the Optima ratings of Good in all crash-test categories, and the Optima Hybrid's new Superior-rated forward collision-prevention system with emergency auto braking should earn it a Top Safety Pick+ designation. Blind-spot detection, advanced smart cruise control, and a lane-departure warning system round out the available active safety systems.

Not all technology updates on the 2017 Optima Hybrid are life-and-death related, however. The infotainment system now includes Apple CarPlay, and a premium 630-watt Harman Kardon sound system with ten speakers is optional.

Expect prices for the base Optima Hybrid to start at about $27K, with a fully loaded model running into the mid-$30K range. Kia says the new 2017 Optima Hybrid should arrive at dealerships this summer.

What's your take on the 2017 Kia Optima Hybrid?

Stevewiz Actually, I had the pleasure of driving this vehicle today ( 06/04/2017 ) and the drivetrain was simply Seamless. I am hoping to purchase this vehicle during Labor day for the special pricing.

Stevewiz Oh Yeah, I forgot to mention that this vehicle will get an Average of 42mpg.'s even if you have a Heavy Right Foot and it has a 15.9 gallon fuel tank.

Have you driven a 2017 Kia Optima Hybrid?
Rank This Car