Looking for a Used Niro in your area?

The sum of the Kia Niro's parts is greater than the whole. 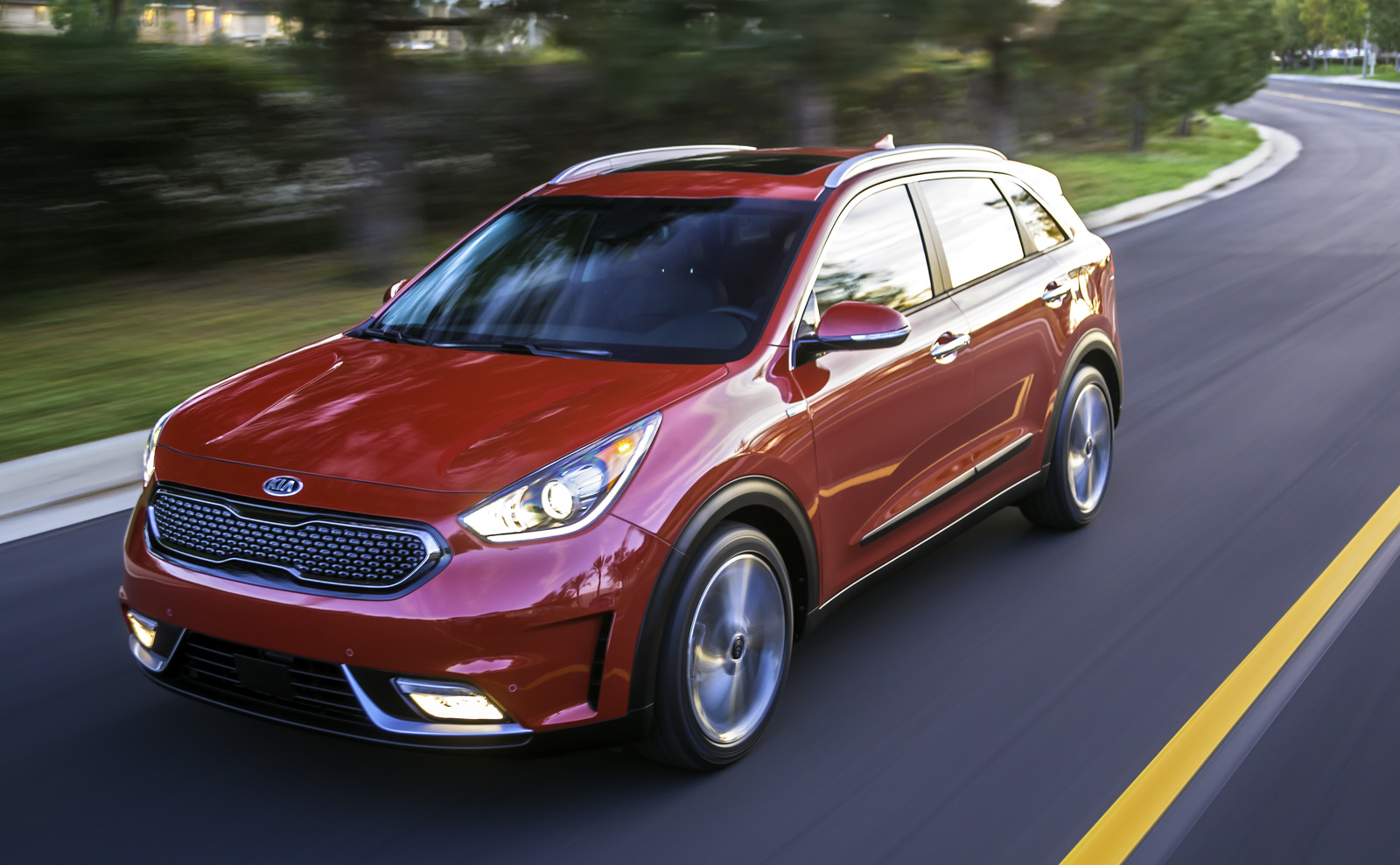 Think of a hybrid car, and the first image that comes to mind will likely be the wedge-like shape of a Toyota Prius. It’s a good bet that Kia is okay with that association, even though its own all-new hybrid—the Niro—is just hitting dealer lots.

That’s because the Kia Niro is about more than just fuel economy. Unlike other hybrids, the Niro is designed for people who won’t trade comfort or practicality for a few more miles per gallon. While its promise of up to 50 mpg combined sure is impressive, so are the Niro’s comfortable interior, spacious rear seat, and crossover-like styling.

Unfortunately, in its attempt to give its new hybrid mass appeal, Kia made some compromises on fuel economy and practicality. The result is a car that can’t compete on an even playing field against some of its better-known rivals. 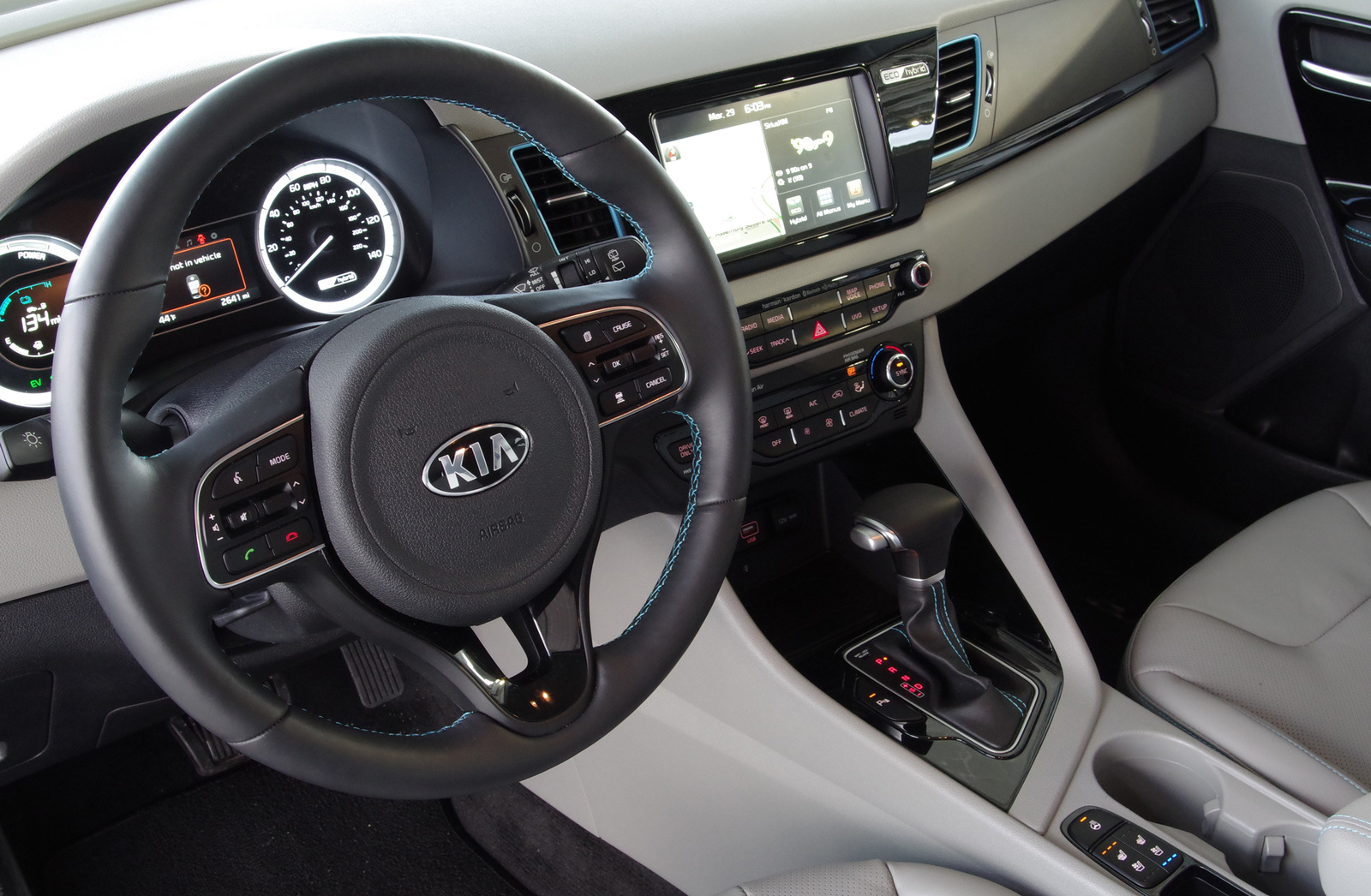 When it comes to design, most hybrids follow one of two schools of thought. Some are futuristic hatchbacks—like the Toyota Prius or the Hyundai Ioniq (with which the Niro shares much of its hybrid running gear). They’re designed not only for impressive aerodynamics, but also to appeal to the kind of folks who geek out over hypermiling. Others are hybridized versions of traditional sedans, like Ford Fusions and Kia Optimas. Aside from a few badges, some extra trim, and maybe some unique wheels, they’re as anonymous as the choices at an airport rental-car lot.

But the Kia Niro doesn’t fall into either category. Even though it’s available only as a hybrid, only a tiny “hybrid” badge on the back distinguishes it from competing compact crossovers like the Honda HR-V, Mazda CX-3, Chevy Trax, or Toyota C-HR.

Inside, things are similarly conservative. Although the entry-level FE and midrange LX and EX trims aren’t as lavishly appointed, the Touring model I drove (MSRP $32,445) was nicely equipped with leather seats. Everything felt well-assembled—latches fit and buttons clicked as precisely as they would on any Lexus or BMW. At least in Touring trim, the Niro proved quiet on the highway, and very little road or engine noise seeped into the cabin.

All the important buttons and controls were well-placed and big enough to find by touch, and the displays were easy to read. The hybrid-specific screens were clear, and a massive display in the gauge cluster showed how many miles remained before the next fill-up. 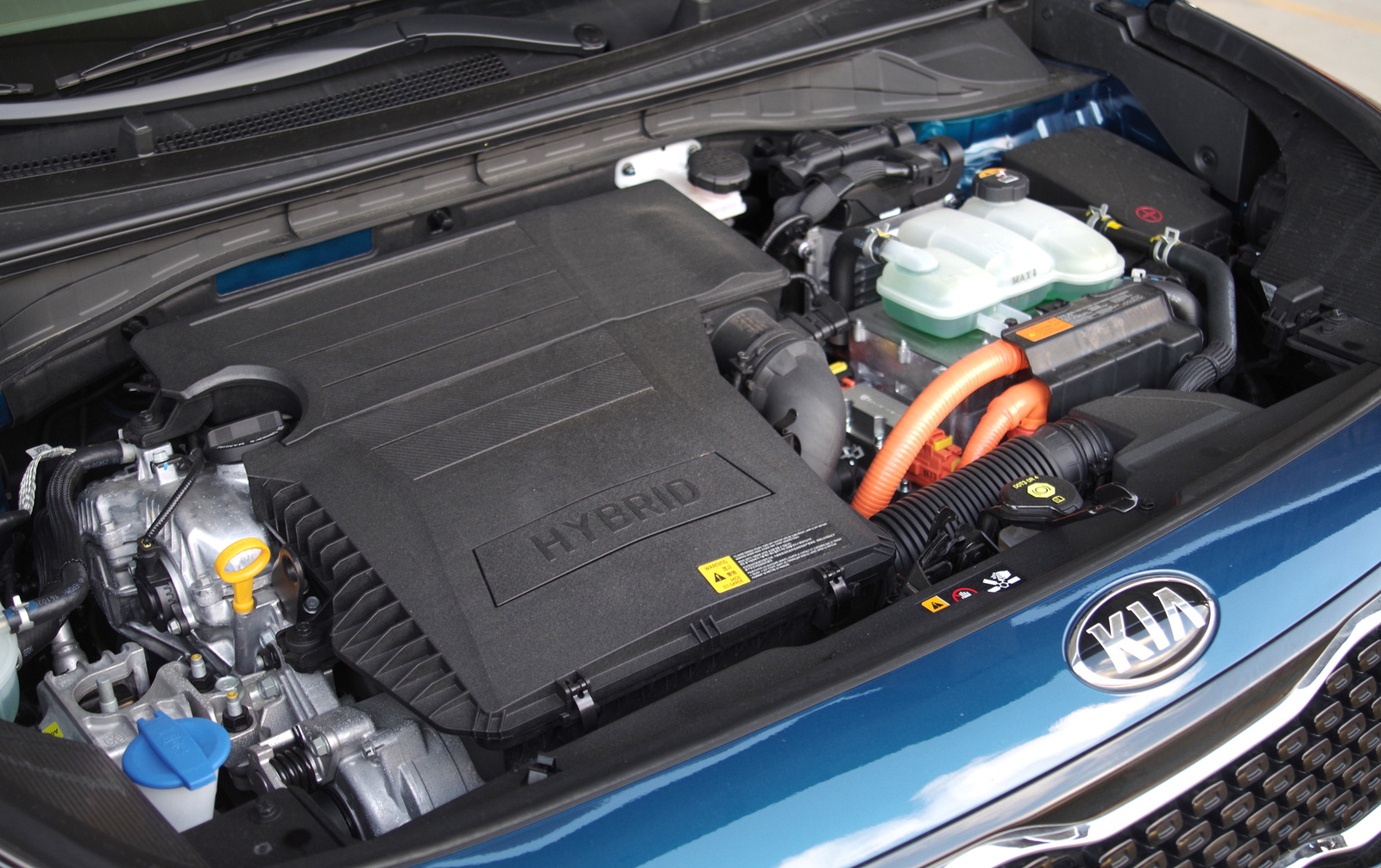 The Niro mates a 104-hp, 1.6-liter gasoline engine with a 43-hp electric motor and 1.56kWh lithium-ion polymer battery. Together, they send power through a 6-speed dual-clutch automatic transmission.

Like most hybrids, the Niro shuts off the gas engine when the battery is charged and the electric motor can provide enough power—like when the car is coasting on a country road or stopped at a light. Also like most hybrids, the Niro has regenerative brakes. That means they take energy that would be wasted as heat and instead convert it to electricity to recharge the hybrid battery.

It seems like Kia put extra effort into keeping the Niro’s dual powerplants from feeling like dueling powerplants. Thanks to the electric motor’s torque, initial acceleration is brisk—but the car doesn’t shudder or slow when the gasoline engine kicks in.

The Niro’s 6-speed transmission is quieter than the Prius’ electronically controlled CVT, and its brake feel is more predictable and smooth than the regenerative brakes on other hybrids. In fact, the sound of the gasoline engine cutting in and out is the only evidence that the Niro has batteries included.

Overall, the Niro’s handling is inoffensive. The suspension is at once cushy and communicative—but the steering feel is a little vague for my taste. 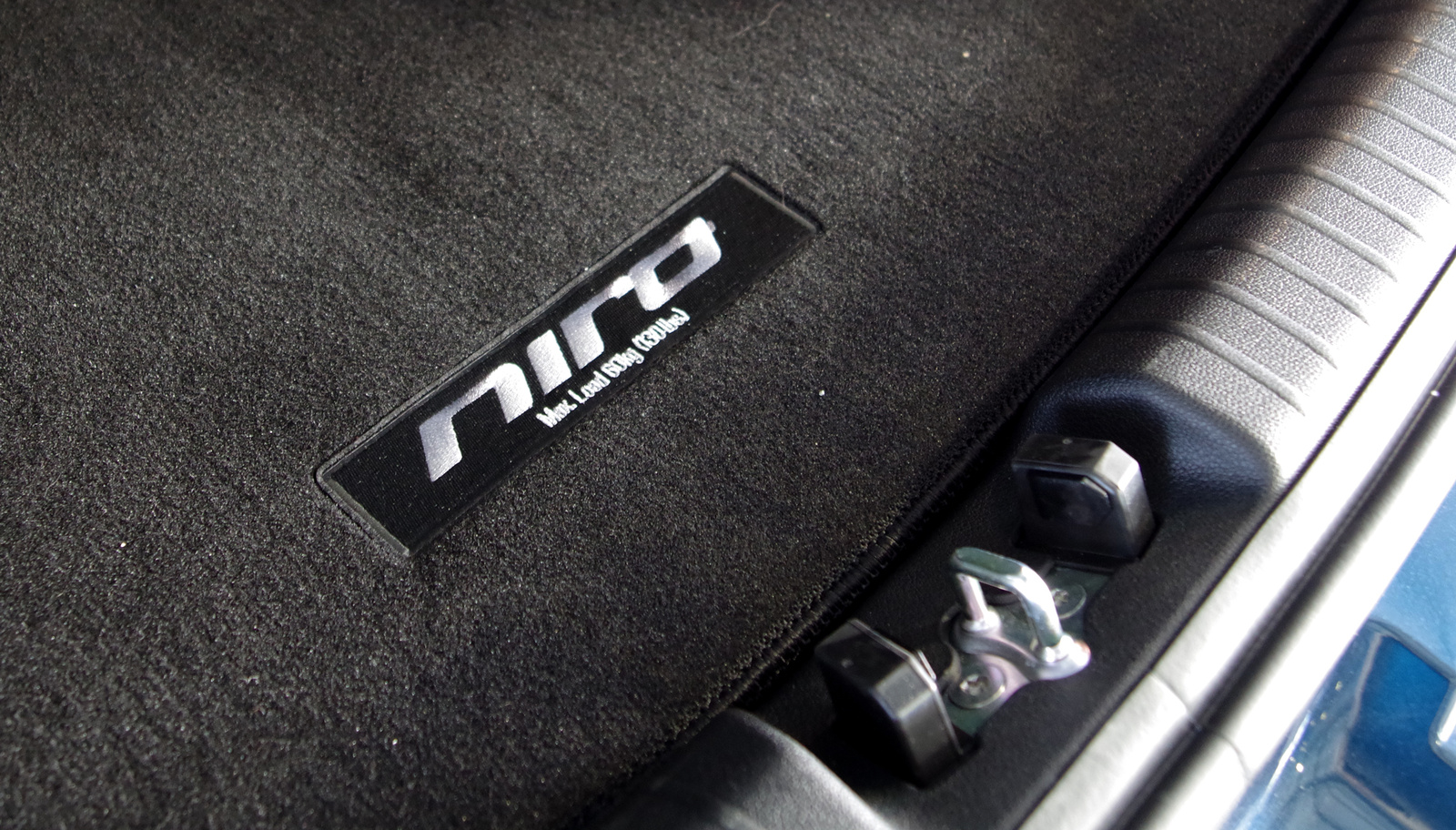 Despite the Niro’s SUV-like profile, its cargo capacity is actually bested by the the Prius’ humble hatchback. According to Kia, the Niro can fit 54.5 cubic feet of cargo with the rear seats folded down. But the Prius can hold 65.5 cubic feet of stuff. At least the rear seat had plenty of room for passengers’ legs.

The Niro I drove also had a warning label in the trunk telling me not to load it with more than 130 pounds of cargo. I’ve never seen a warning like that before, so I reached out to Kia to ask why it was emblazoned on the load floor and embroidered in the cargo mat.

Neil Dunlop, PR manager for Kia’s green car lineup, told us that Kia sets a weight limit on luggage boards—the removable, carpeted boards that sit flat across the load floor—at 176 pounds, “regardless of the board material and structure.”

Dunlop continued, “A 20% reduction is applied to the development target as a safety margin, in order to ensure the boards don’t fail and there are no quality complaints from customers. The result is a 130-pound weight limit.”

In other words, it’s internal worries about the floorboards that sit above the tire mobility kit—not the rear suspension or any other factor—that limit how much weight can go in the rear.

And then there’s the issue of fuel economy.

I drove the Niro in city, highway, and suburban traffic for an entire week. I never saw the car’s fuel-economy display register above 40 mpg, and I averaged in the mid-30s.

I realize that I’m only one data point, and the Niro hasn’t been on the market long enough for the EPA to feature a real-world, crowdsourced fuel-economy estimate. Still, considering the window sticker on the Touring model promises 40 mpg highway/46 city/43 combined, the 35 mpg I achieved was quite a disappointment. 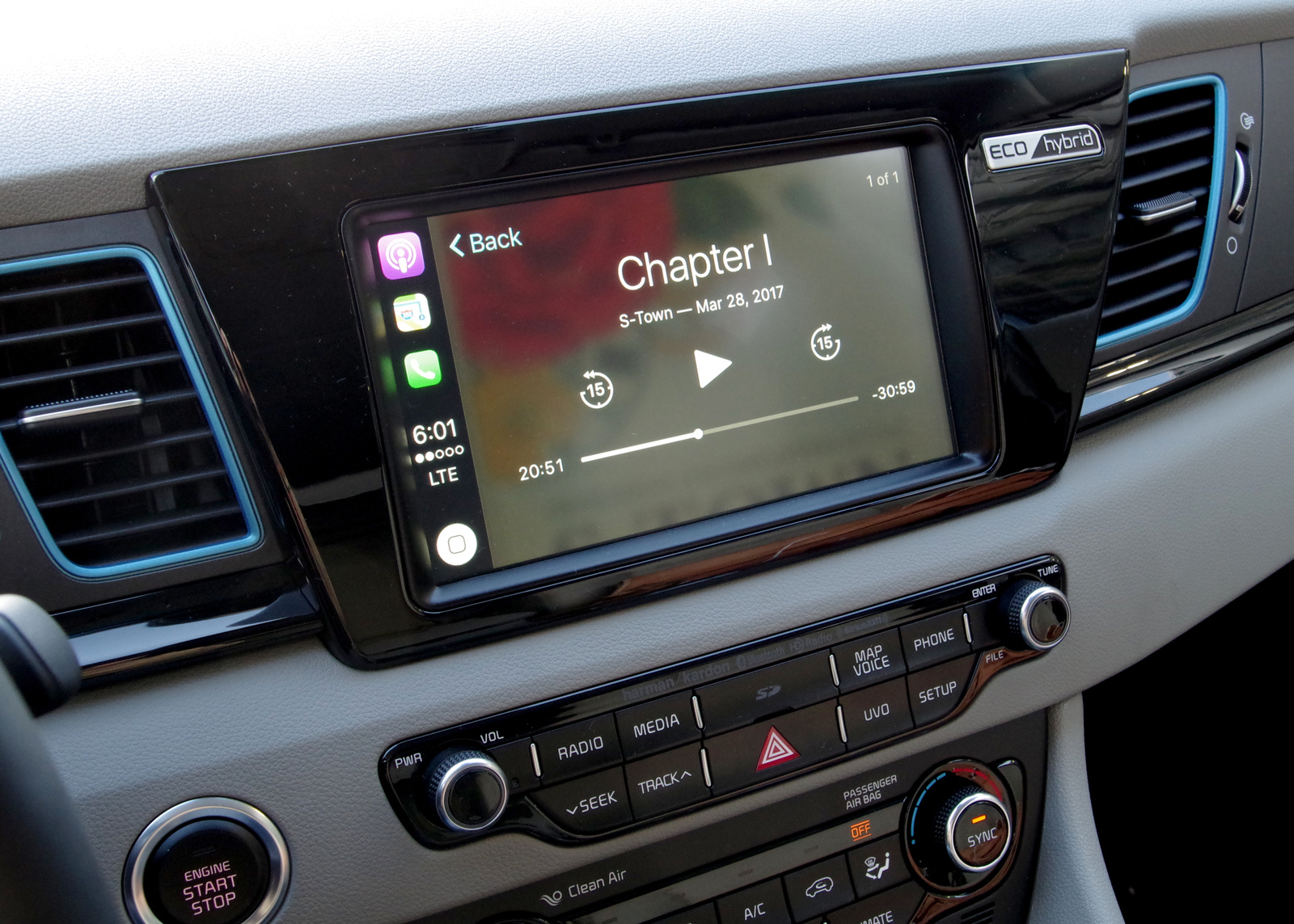 The Niro is impressively equipped with technology. Apple CarPlay and Android Auto come standard—even on the entry-level FE trim—so you can run apps on your dashboard using your phone’s operating system and the Niro’s standard 7-inch touchscreen.

Kia’s own telematics setup, called Uvo, is standard on all trims of the Niro. Uvo can tell you if your car needs scheduled maintenance and schedule an appointment with your Kia dealer to get it done. It can also remember where you parked and set limits on where, when, and how fast your Niro can be driven.

The LX adds pushbutton start with a smart key, and the EX adds heated front seats and outside mirrors.

In Touring trim, the Niro gets an 8-inch touchscreen with navigation, plus a premium 8-speaker sound system with subwoofer. But even if you don’t spring for the standalone nav system, Apple CarPlay or Android Auto will get you where you need to go. 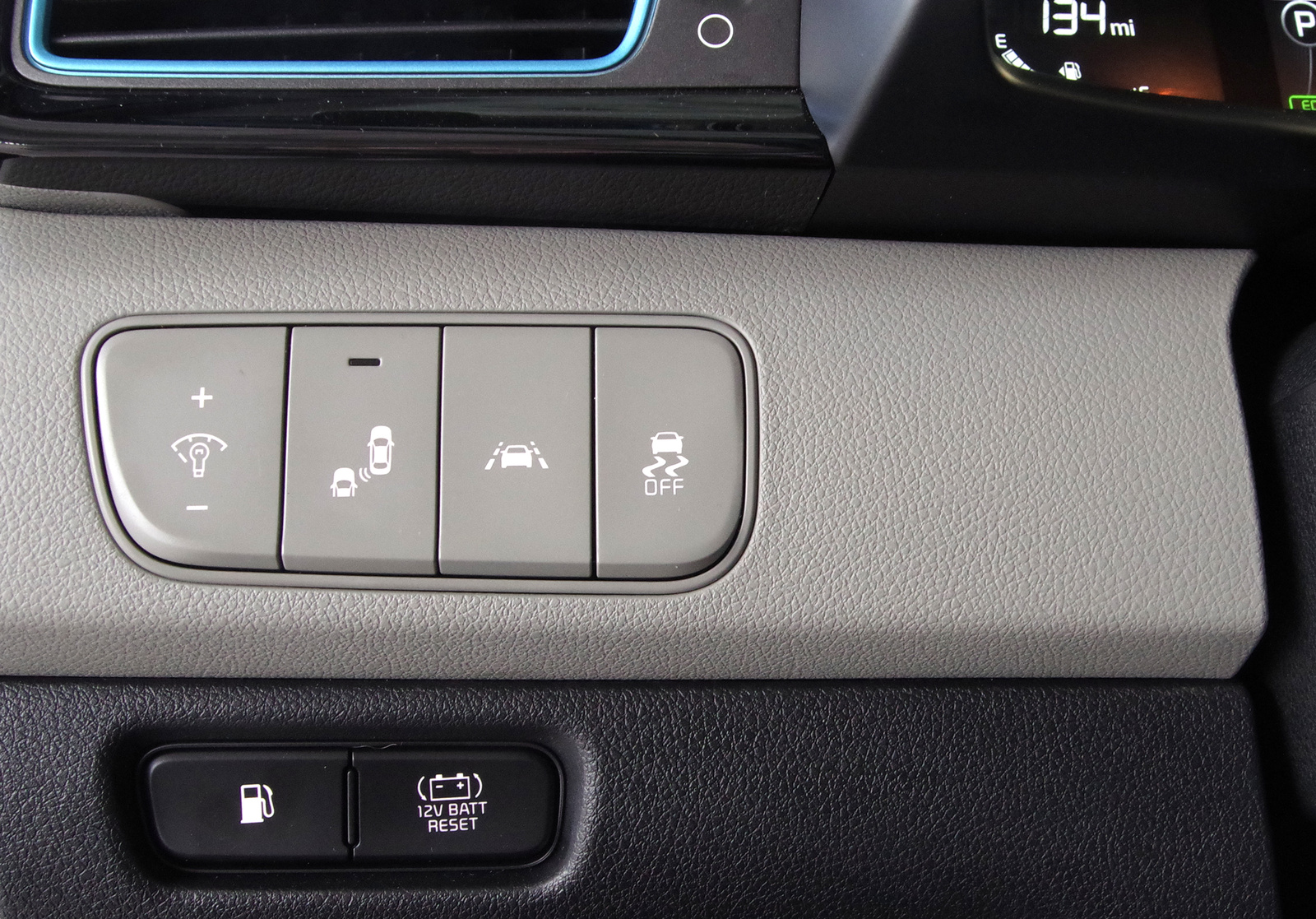 Even though the Niro has lots of tech for entertainment, the most popular active safety features still don’t come standard.

Compare that to almost the entire 2017 Toyota lineup, which comes standard with automatic emergency braking, and you’ll see how the Niro lags behind.

And no matter how much you pay, you can’t get the Niro with all-wheel drive (AWD). That might not matter in Southern California, but New Englanders who are in the market for a small crossover will walk right past the Kia and buy a Subaru Crosstrek instead.

As for crash tests, the Niro has not yet been rated by the IIHS or NHTSA. 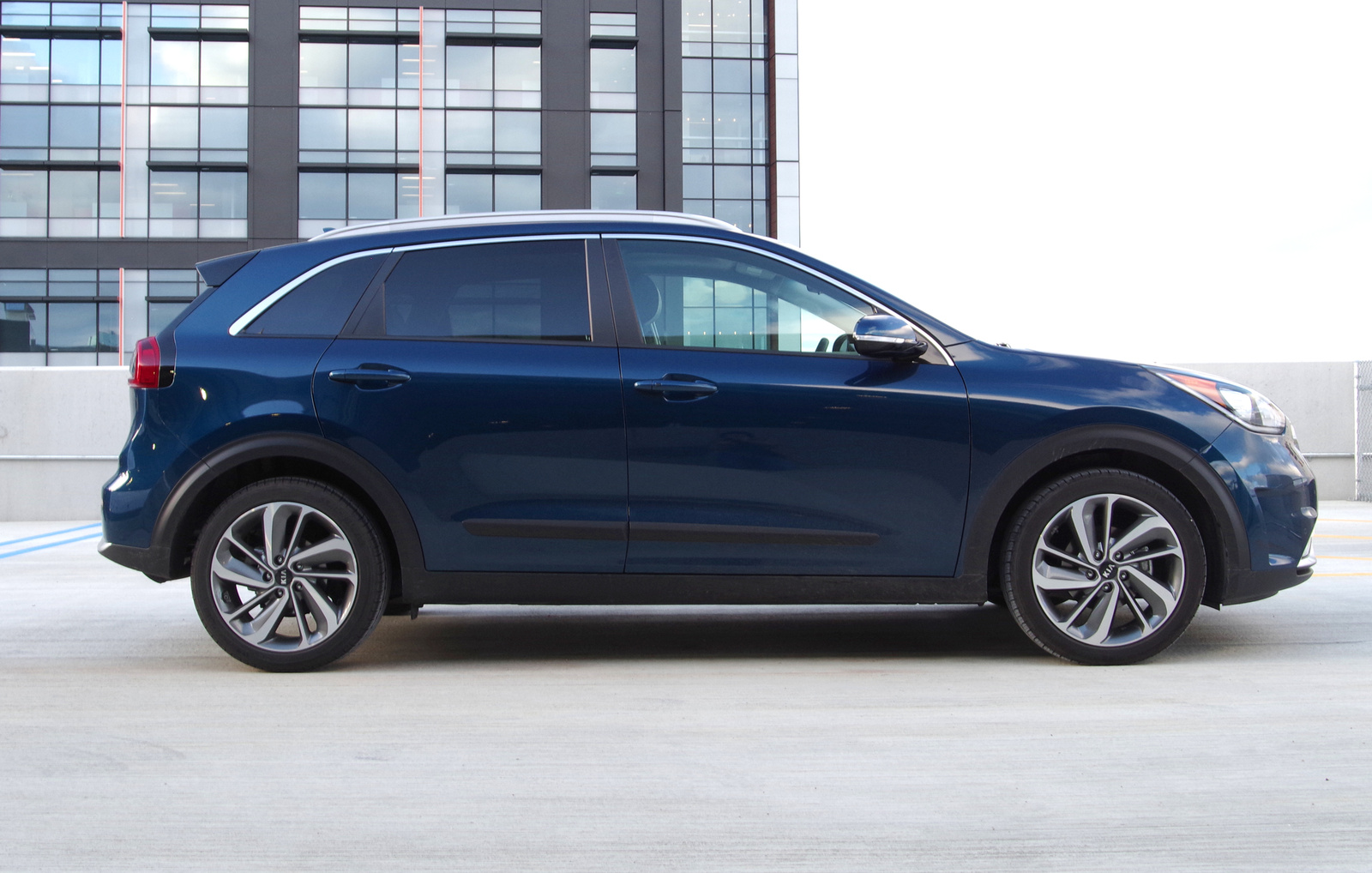 Although the Niro is an attractive car, it exists across two crowded segments: hybrids and compact crossovers. Since hybrids tend to cost more than their conventional counterparts, and since compact crossovers tend to get worse fuel economy than hatchbacks, the Niro is immediately at a disadvantage in both categories.

Even figuring the HR-V’s fuel economy conservatively at 27 mpg and gas prices at $2.30 a gallon, it would take someone who drives 20,000 miles a year 16 years for the Niro’s extra 7 mpg to make up for the difference in price between the two cars.

In other words, the Niro should be on your shopping list if you’re looking for a comfortable and efficient compact crossover. But if you want a good value and AWD, you should check out the Honda HR-V. And if fuel economy matters more than anything else, buy a Prius.

TheHorror The Prius is wedge-shaped? I imagine you have difficulty propping open doors.

NiroLX I can't imagine how you couldn't see the gas mileage over 40, and average in the 30's! I have the LX, and the average MPG is above 50. If you look at sites like Fuely, they have thousands of road miles averaged by many Niros, and the average is near 50.

John I am driving the Niro in crowded Seoul with traffic jams leading to fast freeways, back to extremely hilly 'golmok' alleyways with slopes more than San Francisco. I'm averaging 51mpg which is pretty impressive considering the extreme driving conditions. My only complaint is when it switches from electric to gas, the car ever so slightly lurches forward when coasting. slightly dangerous in bumper-to-bumper traffic.

GuruDM914 Surprised at the author's fuel economy rates as our real world driving showed 60+mpg around the beach areas of NC and 50+mpg in the Blue Ridge mountains of VA. We were impressed with the generally low noise levels and high passenger comfort levels in addition to the great fuel economy! This car is not going to win any drag strip race nor beat a Jeep in off-road competition but you already knew that.

GuruTWV84 I finished my first week of driving a new 2018 Kia Niro LX, and I travel for my work. I travel about 80% highway and 20% city driving. As I pulled into my home tonight, my AVERAGE MPG is 55.5, since I bought the car. Yes, I said 55.5 MPG average! I live in Austin, TX and this is the month of June. The weather is a bit cooler than usual, highs in the low to mid 90's this week. It makes no sense how the reviewer got 35 mpg as an average. My wife had a 2009 Prius Touring. This Kia Niro beats her combined gas mileage by about 8 MPG, in real life. And this car is WAY more comfy than an Prius or Prius V, which I have driven, and has lots less road noise. If you want a road warrior car, skip the Prius, get a Niro. I also have the nitrogen filled tires which help. I have not adjusted anything on the car. It is purely stock, as is from the dealer.

kevinlouisrivera I average about 44 MPG about 80% highway speeds of 80 MPH and 20% speeds at 30 MPH. That is in the Touring Launch Edition from 2017 that has the larger rims and tires. So no. This author must have done a really bad job driving in order to only achieve any kind of economy under 40 MPG especially if he drove an EX trim or below.

Users ranked 2017 Kia Niro against other cars which they drove/owned. Each ranking was based on 9 categories. Here is the summary of top rankings.

Looking for a Used Niro in your area?

Hello, I have a 2017 Kia Niro Hybrid (not a plug in) that charges while it drives. I purchased the car used, only 28k miles, and the hybrid battery is showing at about 50% charge. How do I get th...

How May I Reset My Clock On On Kia Niro 2017 SE Touring Model?

How to reset my car clock .... it is working but 2 hours ahead of time. I need specific instructions for the 2017 Kia Niro touring SE model.

Does The Kia Niro 2017 Allow For Wireless Charging Of An Android Galaxy S8?...

I sometimes forget the car is running and will be in the house for some time. How long before it turns itself off?

Hello all! Looking for some advice on a used car purchase. I took a new job which will require a round trip commute of 112.6 miles per day...mostly 55 mph roads and no freeways. I'm looking at purc...

236 views with 3 answers (last answer about a year ago)