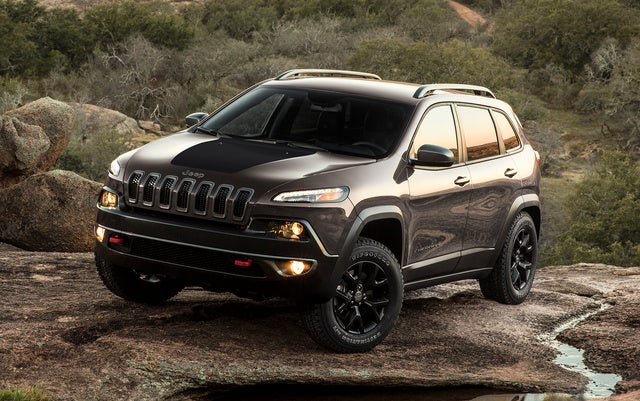 Somehow it doesn’t seem right to call a Jeep a crossover, but the 2017 Jeep Cherokee could be labeled a crossover with attitude, bridging the gap between a unibody-constructed family crossover and a truck-based body-on-frame SUV. The Cherokee has the underpinnings of a sedan, but retains some fairly solid off-road capabilities. And that’s one of the differences between the Cherokee and such competitors as Honda’s CR-V and Ford’s Escape, neither of which can take the same off-road pounding as this compact Jeep.

For 2017, Jeep has yet to announce any changes from the current Cherokee lineup other than the deletion of the limited-production 75th Anniversary Edition trim. Look for this small people-hauler to now sport 5 trims: the Sport, Latitude, Trailhawk, Limited, and flagship Overland.

The Cherokee offers a 184-hp 2.4-liter inline 4-cylinder (I4) powerplant standard aboard each trim, mated to a 9-speed shiftable automatic transmission that manages 171 lb-ft of torque. FWD versions are estimated at 22 mpg city/31 highway/25 combined, trims with the Active Drive I system at 21/28/24, and trims with the Active Drive II 4WD configuration at 21/27/23. Don’t look for neck-snapping acceleration from the I4, though it’s certainly adequate for running errands or the rush-hour commute. Out on the highway, the 9-speed automatic is slow to downshift, so plan your passing maneuvers with care.

Available on all trims except the Sport is a 3.2-liter V6 engine that also mates with the 9-speed shiftable automatic, but puts out 271 hp and 239 lb-ft of torque. EPA-estimated mileage with a V6-equipped Cherokee is 21/29/24 in FWD garb, 20/28/23 when toting the Active Drive I 4WD system, and 21/27/22 when equipped with Active Drive II 4WD. The Trailhawk, with its standard all-terrain tires, gets a combined 22 mpg with either the I4 or the V6. Towing is maxed out at 4,500 pounds with the V6, and a 6-cylinder Cherokee with Active Drive I 4WD scooted from 0-60 mph in a respectable 7.4 seconds.

Though the entry-level trim, the Cherokee Sport still boasts such standard features as remote keyless entry, cruise control, telescoping tilt-wheel steering, reclining rear seats, and a 6-speaker audio system with a memory card slot. Move up to the higher Cherokee iterations and you get standard upgrades like a dual sunroof (front power opening), 9-speaker premium audio, and Bluetooth-integrated Uconnect infotainment and telematics with smartphone apps.

A towing package is available on all trims, and the Latitude and higher variations offer a Luxury group that boasts high-intensity-discharge (HID) headlights, premium leather upholstery, heated and ventilated front seats, memory for driver settings, and a power liftgate.

The government gives the current Cherokee 4 out of 5 stars for overall crashworthiness, while the Insurance Institute for Highway Safety gives it a best possible score of Good on all test except the newer small-overlap frontal offset, where the Cherokee scored a second-worst Marginal rating.

Challengers to the 2017 Cherokee include the Honda CR-V and Toyota RAV4, each of which offers more cargo space and a better I4 powerplant, as well as the Ford Escape and Mazda CX-5, with both of these latter being a blast to drive compared to the Jeep. But note that Subaru’s Forester and Crosstrek, both similarly sized and equipped, might give the Cherokee a run for its money when venturing off the beaten path.

Nomad0424 The new Cherokee is a prissy, sissy crossover. Long live the Liberty! Bring back the Liberty! There's nothing like it on the market today!

mikep53 I had a Liberty and loved it. Do not like the Cherokee

Adobo JUST GOT ONE AND ITS VERY HIGH TECH. EASY ON THE EYES AND HANDLES VERY WELL. WISH I HAD BOUGHT ONE BACK IN 2015 INSTEAD OF THE PATRIOT. FINALLY I'M WHERE I BELONG A JEEP CHEROKEE.

Users ranked 2017 Jeep Cherokee against other cars which they drove/owned. Each ranking was based on 9 categories. Here is the summary of top rankings.

Have you driven a 2017 Jeep Cherokee?
Rank This Car

My son left our Jeeps windows open during a storm. It got VERY VERY wet. We managed to get the carpet and seats dry, but I now hear water "sloshing" around. Do you have any idea where water could b...

Will It Be Covered With 7 Yr Warrenty

Service shifter light came on and gear shift lights are all red,P,R,N,D yesterday 1/17/19. How many complaints have to be done before this becomes recall I had the car a year yet

I have a 2017 Jeep Cherokee latitude. It keeps shutting off! The dealer is telling me this is a safety feature because the oil is low. I have my oil changed at 3-4000 miles using synthetic oil. It ...

Service shifter light is staying on.