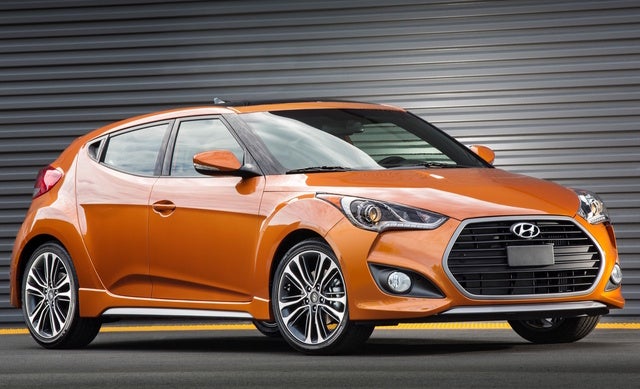 While the regular Hyundai Veloster looks every bit the part of a sporty hot hatch, you’ll have to step up to the Veloster Turbo to get any serious performance credentials—and the Turbo’s R-Spec trim takes this sportiness even further. Visually, the 2017 Veloster Turbo is distinguishable from the standard Veloster by its exterior LED lighting, black grille treatment, and a small but bright red “Turbo” badge on the tail. Otherwise, the cars are largely similar, offering the same hatchback utility and extra passenger-side door in an overall package that’s looked like nothing else on the road since the Veloster’s debut in 2012.

Under the hood of the 2017 Veloster Turbo is the same 1.6-liter 4-cylinder engine found in the Accent and the Elantra. While the normal Veloster has just 138 hp to work with, the twin-scroll turbocharger of the Turbo boosts engine output to 201 hp, with 195 lb-ft of torque. The powertrain is mated to either a 6-speed manual transmission or a 7-speed paddle-shifted dual-clutch automatic, although the R-Spec trim is only offered with the manual transmission. The Veloster Turbo gets a 0-to-60 time of around 7 seconds—a respectable but unremarkable number among the current crop of hot hatchbacks. When fitted with the manual, the Veloster Turbo will manage 25 mpg city, 33 highway, and 28 combined, while models equipped with the automatic will do 26, 32, and 29.

Beneath the quirky styling, the Veloster is mainly based on the previous-generation Elantra. To boost performance, the Veloster Turbo tightens up the Veloster’s otherwise economy-car suspension for sharper, flatter cornering and adds better brakes and stickier tires. The R-Spec trim gets an even stiffer suspension and different steering tuning. Critics have commented on the somewhat vague-feeling electric power steering, but the Veloster Turbo is still just an economy car that’s been tweaked for some extra driving fun—and that’s exactly how one should expect it to feel.

The Veloster Turbo is spacious up front, although rear entry and exit aren’t as easy as you’d think, despite the extra door on the passenger side. The back seats do flip down, however, making for plenty of usable cargo room you wouldn’t get in a normal coupe, and there are several storage bins and cubbies for smaller items. For 2017, Hyundai has added HD Radio, Apple CarPlay, and Android Auto to the touchscreen infotainment system. Also standard are Bluetooth, a USB port, and the Hyundai Blue Link Connected Care service, which provides emergency notification and roadside assistance as well as vehicle diagnostic information. Available options include a panoramic sunroof, automatic climate control, navigation, and a 115-volt power outlet.

The Veloster Turbo is an upgrade over the regular Veloster not only in terms of performance, but also in its comfort and convenience features. The interior boasts heated leather front seats, push-button start, and an 8-speaker 450-watt stereo. The slightly more hardcore R-Spec trim does away with the keyless ignition and heated leather, but it does get a special short-throw B and M sport shifter.

Unfortunately, the Veloster falls somewhat short when it comes to safety. The National Highway Traffic Safety Association (NHTSA) gave it mostly good scores, with 5 stars overall and 4-star scores for rollover resistance and frontal impact. It fared less well with the Insurance Institute for Highway Safety (IIHS), receiving a Marginal rating in the small front-overlap test and an Acceptable rating for side-impact protection. For a car at this price point, however, the Veloster Turbo does have a solid group of safety features at its disposal. Standard equipment includes a reversing camera and driver’s side blind-spot mirror, and the Blue Link system comes with emergency crash notification and other SOS services. Rear parking sensors are available, which along with the standard reversing camera are a useful addition, considering the chunky bodywork and comically small rear window that make visibility difficult.

More serious driving enthusiasts might want to spring for the Volkswagen Golf GTI or the upcoming Honda Civic Si, but the Veloster Turbo with its R-Spec trim is a good alternative for the money—especially for someone who just wants a commuter car with a little extra pep.

What's your take on the 2017 Hyundai Veloster Turbo?

GuruYXQRW Rented one. Loved it!

Have you driven a 2017 Hyundai Veloster Turbo?
Rank This Car

I engaged my window lock for the first time the other day. Since disengaging the lock the passenger and rear window no longer work. I have tries replacing the fuses for the windows and the window ...

Do You Ship Cars To Myanmar?

I saw the car that fits me here. But I see no option or information about shipping abroad. I am from Myanmar.