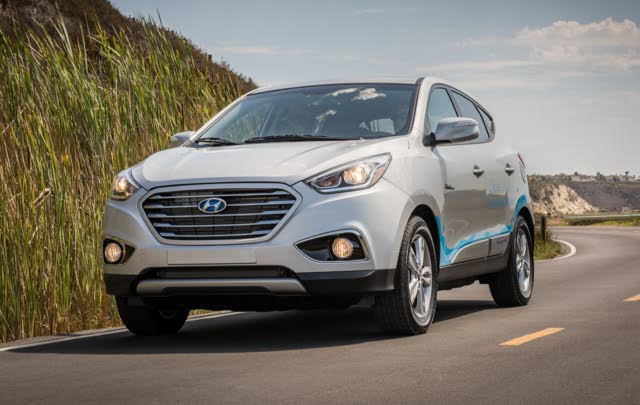 Looking for a Used Tucson Fuel Cell in your area?

Since the Tucson Fuel Cell is based off a mainstream product, Hyundai has resorted to changing as many details as it could. Unique to the Tucson Fuel Cell are the one-piece grille, bumper, and fog lights. The trim on the doors and rear bumper is metallic silver, and it gets its own LED taillights. The Tucson Fuel Cell comes in three exterior colors, Chromium Silver, Winter White, and Hydro Blue, but customers can also choose from two different graphic wraps that broadcast the car’s clean-emissions capability. Inside, the only discernible change from the regular Tucson is an instrument cluster that has a power-state graphic in place of the RPM gauge.

The Tucson Fuel Cell drives the front wheels with a 134 horsepower, 221 pound-feet electric motor. Instead of a giant battery, power is generated by a 100 kilowatt fuel cell stack and a 37 gallon compressed hydrogen tank stored under the cargo-hold, plus a smaller 24 kW battery. The only emission is water vapor. With that, the Tucson Fuel Cell can accelerate to 60 mph in 12.5 seconds and run to a top speed of 100 mph. It’s rated for 265 miles of range between re-fuels, which take about 10 minutes, and with fuel-economy at 49 city MPGe, 51 highway, and 50 combined.

The Tucson Fuel Cell has not been crash-tested. However, it uses the same bodyshell as an SUV that did reasonably well in the Insurance Institute for Highway Safety (IIHS) crash tests. Also, it’s been put through a rigorous safety program by Hyundai due to the containment of compressed hydrogen.

Residents of select areas in California, where the bulk of hydrogen infrastructure lies, can lease the Tucson Fuel Cell for 36 months, with $2,999 due at signing and a $499 monthly payment. There are a few important perks, though. The first is unlimited complimentary hydrogen refueling. Another is a concierge service in which customers can have the car picked up for service from their homes or businesses and a loaner car is dropped off. Then, when service is finished, Hyundai will swap the cars back. Lastly, drivers get access to the California high-occupancy vehicle (HOV) lanes regardless of the number of passengers present.

What's your take on the 2017 Hyundai Tucson Fuel Cell?

Have you driven a 2017 Hyundai Tucson Fuel Cell?
Rank This Car

Looking for a Used Tucson Fuel Cell in your area?