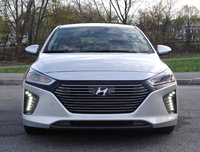 A no-nonsense hybrid hatchback from Hyundai stands out for its specs, not its looks. 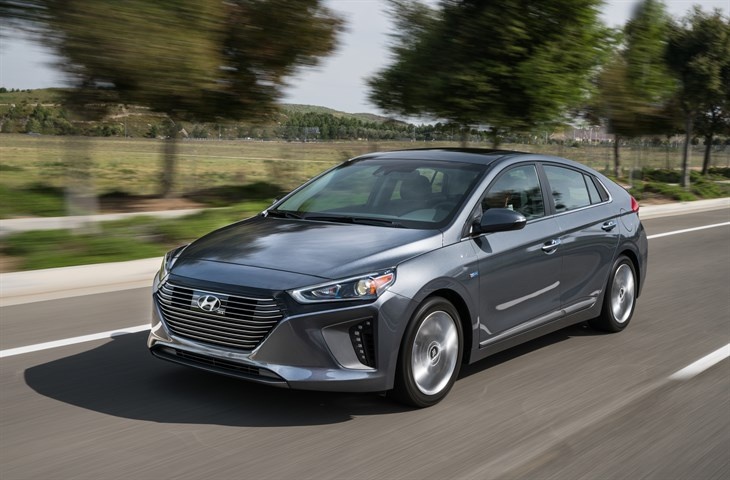 Hyundai must be playing the long game with the all-new Ioniq. After all, unless it's preparing for gas to hit $4 a gallon again, why else would a carmaker release a compact hybrid hatchback when Americans are ignoring small, fuel-efficient cars in favor of crossovers and SUVs?

If gas prices do spike again, the Ioniq Hybrid will already be on dealer lots, awaiting buyers attracted by a promise of 55 mpg. An all-electric model is also available if you live in California, and a plug-in hybrid will hit dealerships later this year.

But fuel economy isn’t the Ioniq’s only selling point. Compared to the segment-leading Toyota Prius, the Hyundai looks and feels familiar—which should appeal to the sort of buyer who wants an efficient hatchback, but doesn’t like the Prius’ futuristic styling. 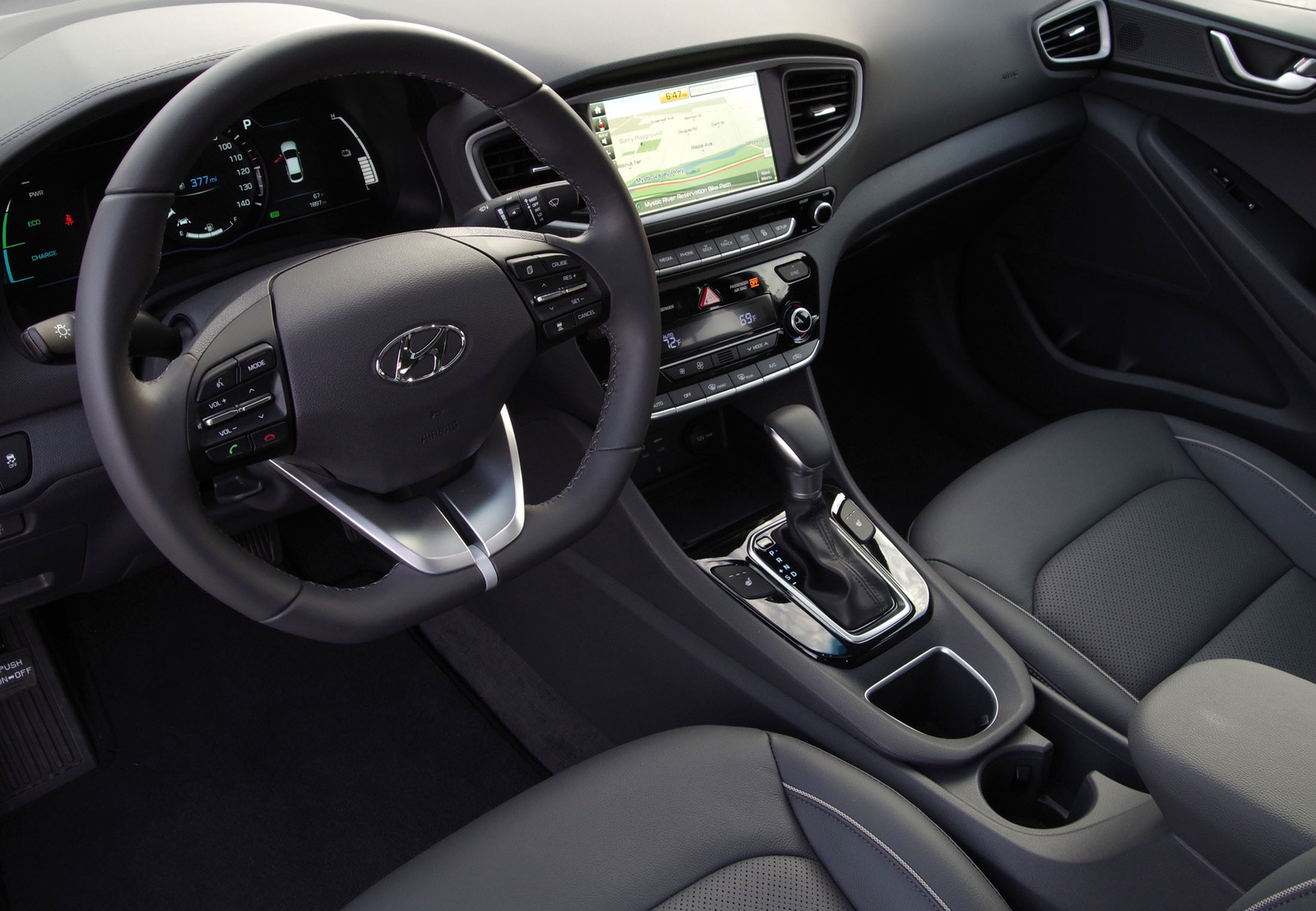 The Ioniq is designed to look relatively normal, which is good news for would-be Prius buyers who aren’t fans of Toyota’s polarizing design.

From the front, the Ioniq’s family resemblance to the Elantra and Accent is obvious. But it also shares one defining visual characteristic with other hybrids, like the Prius and the Honda Insight: A squared-off tail, called a Kammback, helps the Ioniq achieve a slippery drag coefficient of 0.24. In fact, it’s one of the most aerodynamic cars on the road—another fuel-saving trick the Ioniq keeps up its sleeve.

Inside, the Ioniq is similarly subdued. Hyundai does a great job with straightforward dashboards, and the Ioniq is no exception. Compared to the Prius’ confusing screens and non-standard shifter, I appreciated how familiar the Hyundai felt. All the buttons were well-labeled and easy to find by touch, and it even had dedicated knobs for Tuning, Volume, and Temperature.

But simple doesn’t mean Spartan. In fact, the top-of-the-line Ioniq Hybrid Limited I drove was borderline luxurious. It came with leather seats, and the $3,000 Ultimate Package added premium audio, wireless smartphone charging, a power driver’s seat with memory, and some active safety options.

Even if you buy an entry-level Ioniq Hybrid Blue ($22,200 before freight and destination), you still get dual-zone climate control, a proximity key, and satellite radio. It also promises the best fuel economy: 57 mpg city and 59 highway. The mid-level SEL ($23,950) adds extras like heated front seats, a power driver’s seat, a 7-inch LCD display in the gauge cluster, and a leather-wrapped steering wheel. Those options add weight, and the SEL and Limited trims share mileage ratings of 55 city/54 highway.

Like the Kia Niro, with which it shares much of its powertrain, the Ioniq feels more responsive than other hybrids. That’s largely thanks to its transmission. Instead of the more unusual single-gear electronic continuously variable transmission (eCVT) setup typical of hybrids, the Ioniq has a 6-speed dual-clutch transmission. At speed, acceleration is linear and predictable, although I did notice a slight lag whenever I suddenly accelerated from a crawl. It’s unnerving to feel a car hesitate when you’re pulling into traffic.

But I had no issues with the Ioniq’s brakes. Most hybrids have regenerative brakes, which recapture energy to charge the battery. Unfortunately, they also tend to feel weak until they suddenly grip. By comparison, the Ioniq stops as smoothly as any other car despite having regenerative brakes.

Steering and suspension feel are both a little dull for my tastes, but the Ioniq is perfectly tuned for comfortable highway cruising.

Of course, you’re probably most interested in fuel economy, and unfortunately, the Ioniq didn’t quite deliver. I got about 45 miles per gallon in combined city and highway driving. That’s really impressive, but still about 10 fewer miles per gallon than the window sticker claimed.

It’s also about 10 fewer mpg than I got when I recently drove a 2017 Prius on the same routes. I noticed a similar difference when I drove the Kia Niro, which shares a similar hybrid drivetrain with the Ioniq. 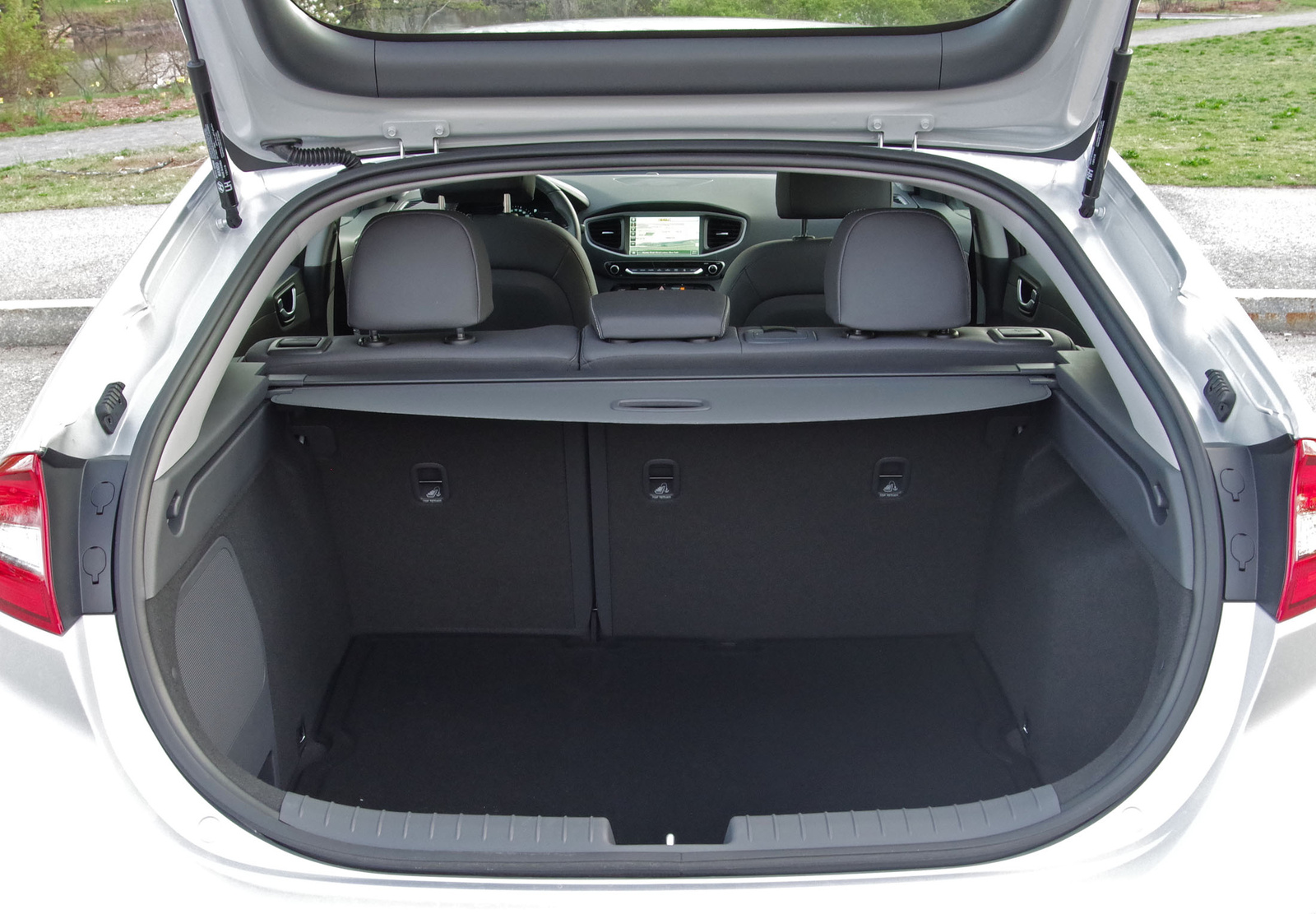 From its spec sheet alone, it’s clear that Hyundai benchmarked the competition when its engineers designed the Ioniq. Nearly every measurement slightly exceeds the same spec on the Toyota Prius.

For instance, you can fit 26.5 cubic feet of cargo in the back—a little more more than the 24.6 cubic feet the Prius offers. Both cars have almost identical width and length for loading, but the Ioniq’s lower cargo floor adds volume, and a trunk opening that’s 3 inches taller makes the Hyundai the cargo champ.

But when it comes to the passenger compartment, the Ioniq beats the Prius only on paper. Yes, the Hyundai offers 3.1 cubic feet more space for people—but the front seats both sit so low that there’s no room for rear passengers’ feet. 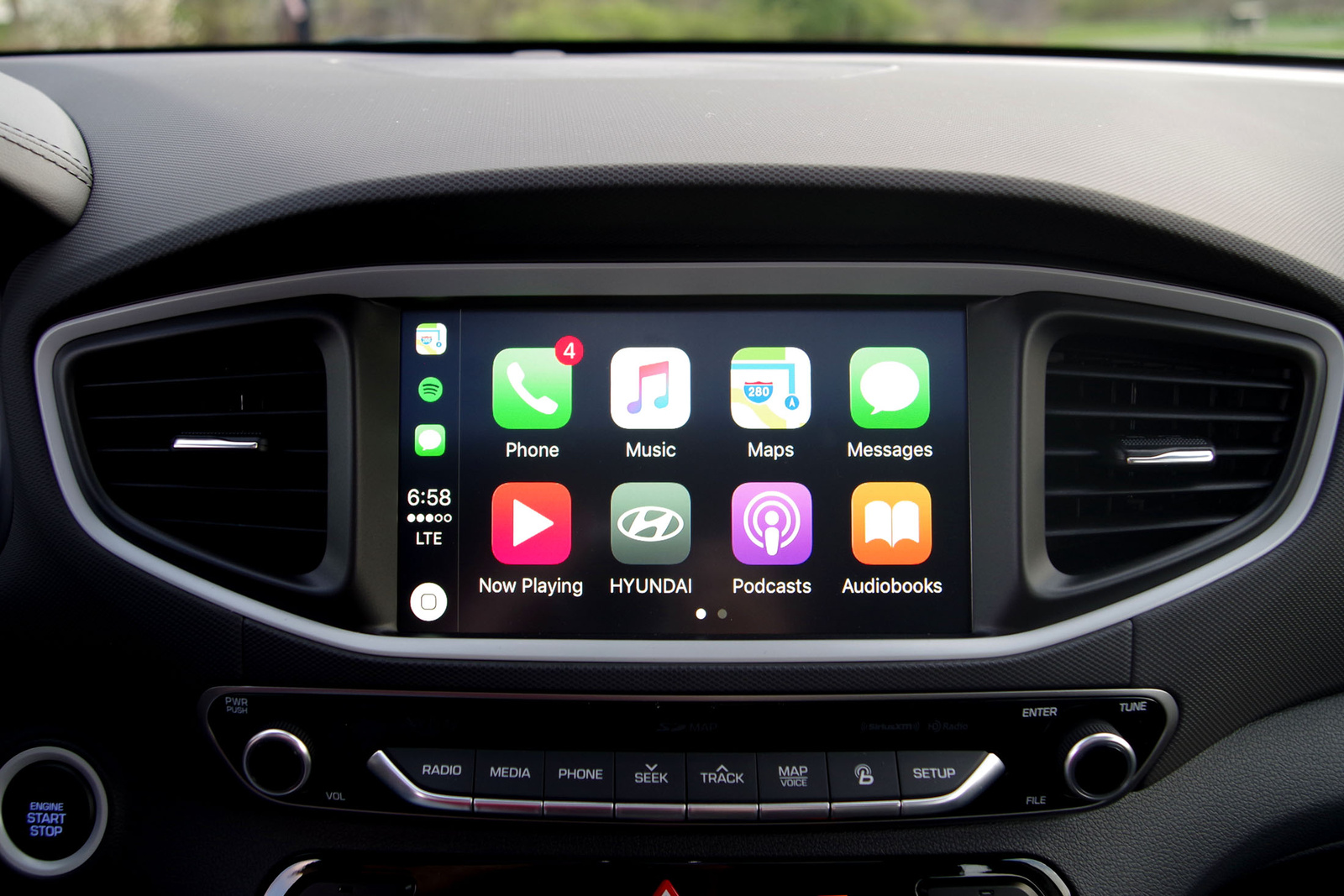 Across all trims, the Ioniq comes with Apple CarPlay and Android Auto standard. That means you can load map and music apps from your phone without having to learn a whole new operating system. Instead, familiar iOS and Android icons will show up on the Ioniq’s touchscreen, and a press of the voice-control button on the steering wheel will cue up Siri or Google.

That’s one big advantage the Ioniq has over the Prius. The Toyota still doesn’t play nice with smartphones, and it offers neither Android Auto nor Apple CarPlay. Its built-in navigation setup is conspicuously antiquated for such a high-tech car, too.

Upgrade to the Ioniq Limited and you’ll get an Infinity sound system and BlueLink—a telematics suite that lets you check on and remotely start your car from your smartphone or smart watch. 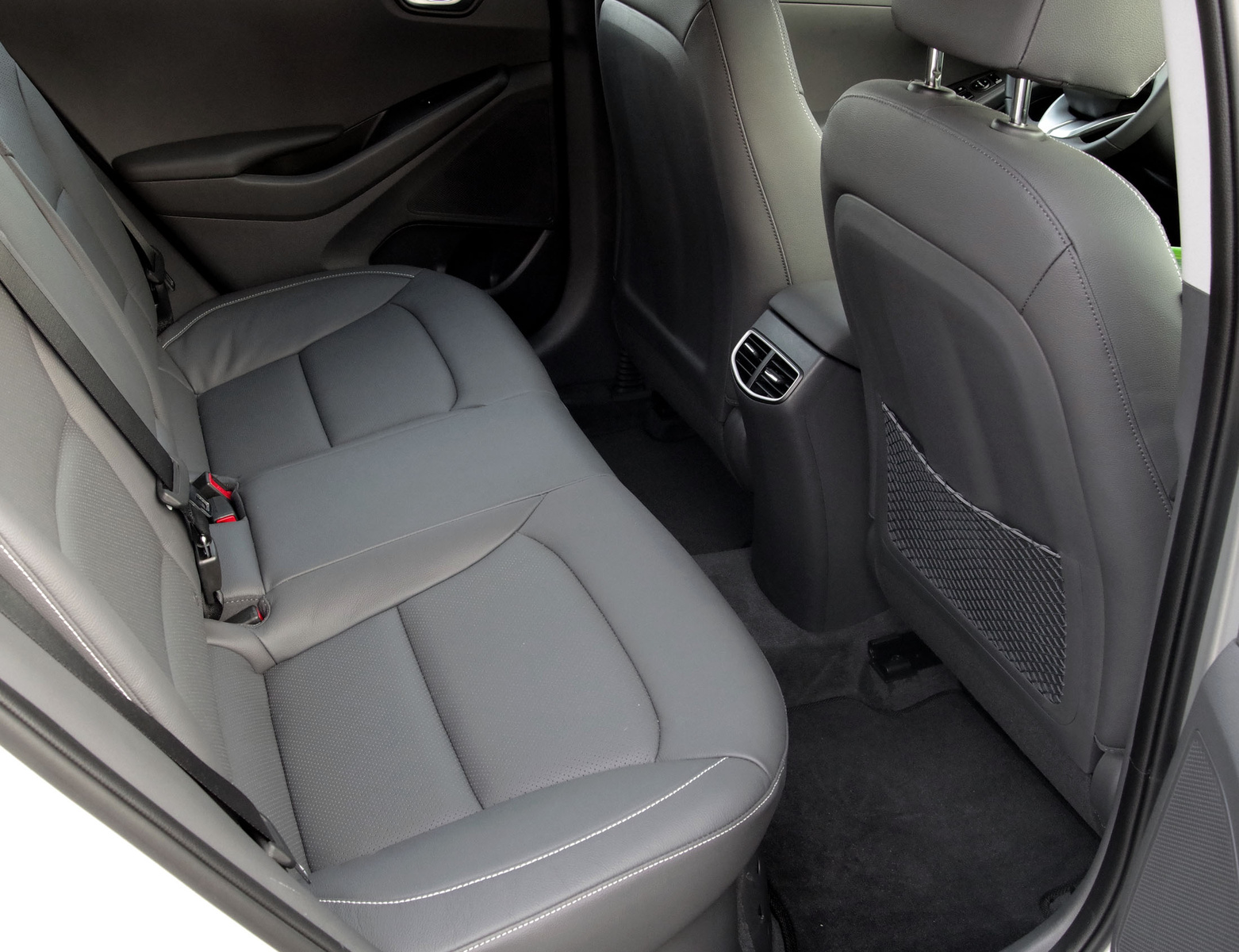 If only the Ioniq paid as much attention to active safety as it does to infotainment. Yes, popular features like lane-departure warning, forward-collision warning, and smart cruise control are available, but they always cost extra.

Spending an additional $1,000 to get active safety as part of the Tech Package on the SEL isn’t such a big deal, but on the Limited it’s bundled as part of the $3,000 Ultimate Package. In other words, if you want leather and smart cruise control, you’re going to spend north of $31,000—that's a lot for a hatchback. On the entry-level Ioniq Blue, active safety isn’t available at all.

By comparison, nearly all 2017 Toyota vehicles feature automatic emergency braking as standard, although all other active safety features remain optional.

As far as passive safety is concerned, the Ioniq has yet to be rated by the National Highway Traffic Safety Administration (NHTSA) or the Insurance Institute for Highway Safety (IIHS). It does come standard with a reversing camera, stability control, and seven airbags. You can also subscribe to Hyundai’s Connected Care if you want instant access to emergency and roadside assistance. 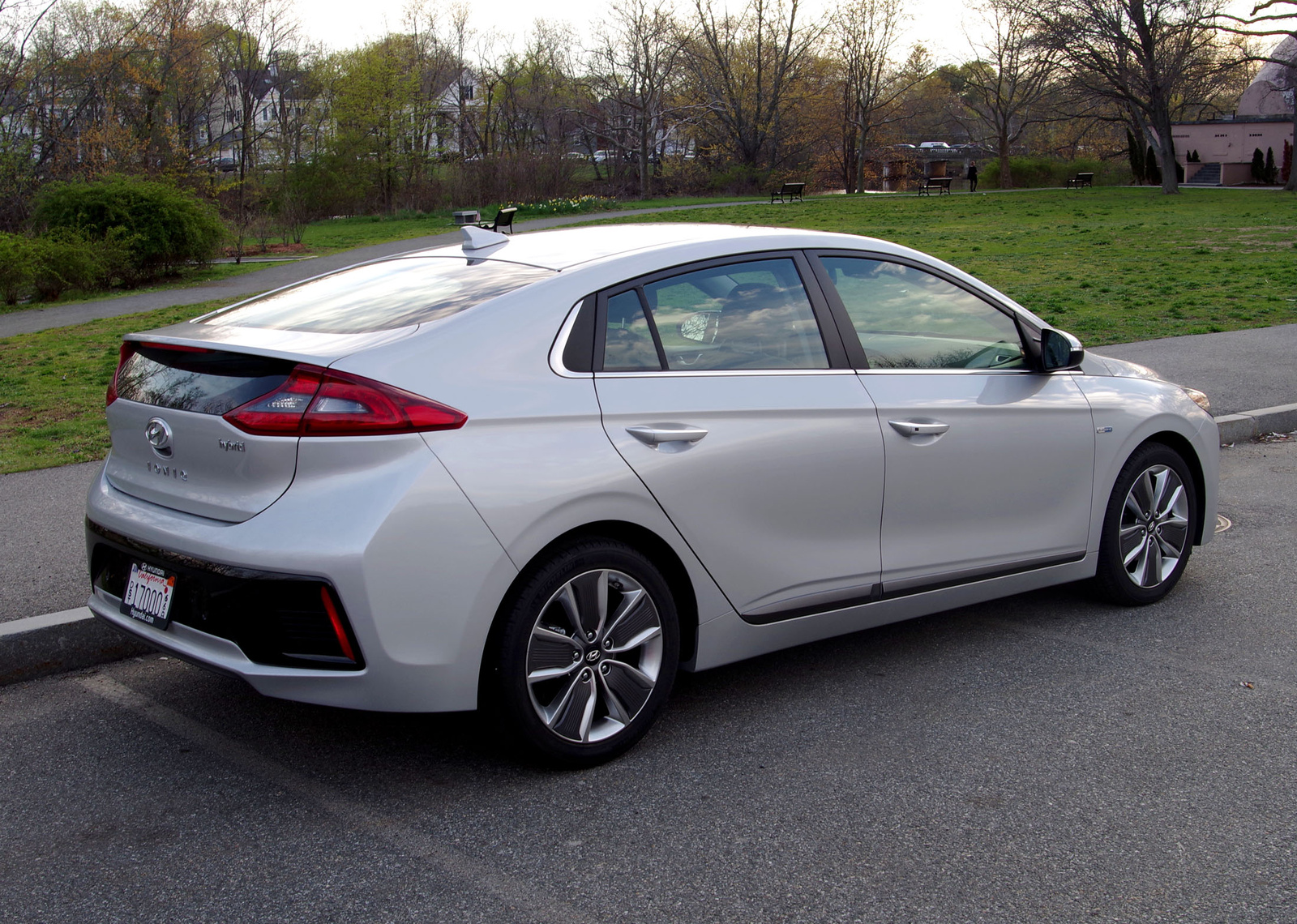 Even if it doesn’t match the estimate on the window sticker, 45 mpg is still impressive. Hyundai’s 10-year powertrain warranty and lifetime hybrid battery warranty add some extra peace of mind, too.

Plus, the Ioniq generally undercuts the Toyota Prius on price. The entry-level Ioniq Blue starts at just $22,200, and a well-equipped SEL with the Tech package—which I think is the best value—is a hair under $26,000. In each case, a comparably equipped Toyota would cost a few hundred more.

If you’re set on buying a hybrid, chances are you’ll still end up with a Prius. It defined the segment and continues to lead it for a reason: It has the best fuel economy, a bulletproof reputation, and a “mission control” interior that appeals to tech-savvy buyers.

But the Ioniq is stiff competition—especially for the sort of buyer who wants to save money without making a statement. If, like Hyundai, you’re betting that gas prices will go up, it might be worth giving the unassuming Ioniq a try.

What's your take on the 2017 Hyundai Ioniq Hybrid?

mortsahl I've had an Ioniq for 3 months, drive it on the highway to and from work every day, and consistently get 50 miles per gallon ... and I used Sport mode most of the time.

TheHorror Right, mort. I'm sure it's uphill, both ways, too.

Have you driven a 2017 Hyundai Ioniq Hybrid?
Rank This Car

Volume Of Safety Package Items (lane Change, Blind Spot, Back Up, Etc) Of 2...

The safety alert items related to the safety package of our 2017 Ioniq SEL are too low. How can one increase the volume