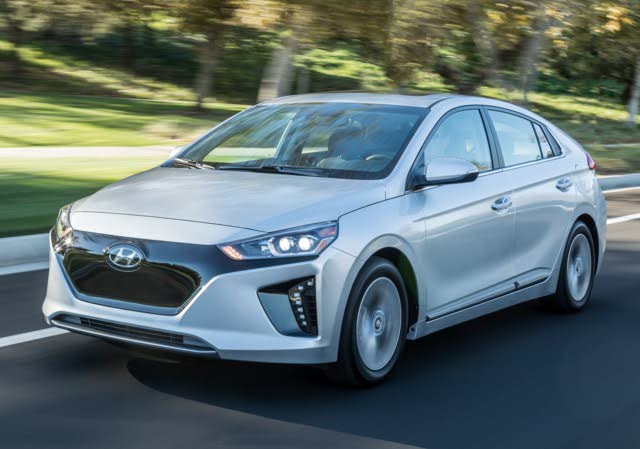 While Hyundai has had the Sonata Hybrid for several years, it has otherwise stayed away from the world of battery-electric vehicles. That changes with the all-new compact Ioniq hatchback. It’s available in three versions and each features a different type of powertrain. One is a fully-electric vehicle called Ioniq Electric.

As far as its exterior, the Ioniq Electric’s adopts the same basic shape as energy-efficient stars with a wedge-like profile and a split-pane rear windscreen. But, that’s where the similarities end. Although the Ioniq resembles a basic eco-cruiser, it’s designed to look as much like a conventional car as possible. Much of that is by way of the front fascia. Though it doesn’t need an upper grille like a gasoline-powered car, it simulates one by way of a wide shape of gloss-black plastic across the front bumper. Otherwise, the Ioniq Electric has none of the often-polarizing design elements of other EVs. It is, however, full of aerodynamic tricks like the crisp edges of the front and rear bumpers, the blade-shaped wheels, and the sharply-defined rear lip spoiler.

Inside, styling and layout are just as straightforward. The Ioniq Electric’s interior doesn’t stand out as unique to the lineup. It could just as easily work in the Elantra, Tucson, or Sonata, but that doesn’t mean it isn’t handsome. The driver is presented with a deep-cut steering wheel and controls that are elegant and easy-to-use. Many of the car’s interior surfaces supplement plastic for renewable and lightweight resources like powdered wood, cane sugar, and volcanic stone. And, there are still smatterings of technology throughout, including a 7.0-inch full-LCD instrument cluster and an ergonomic push-button gear selector. There’s room for five people and 23 cubic feet of storage in the back, expandable by folding down the 60/40 split seats.

Every Ioniq Electric houses an electric motor that makes 118 horsepower and 218 pound-feet of torque that sends its power straight to the front wheels, thanks to a 28 kilowatt-hour lithium-ion battery. The Environmental Protection Agency (EPA) says this package is good for 150 MPGe city, 122 highway, and 129 combined. The range, 118 miles, is on the short side for a full EV, but Hyundai is targeting a particular kind of commuter with the Ioniq Electric. Besides, the car can recharge fully in 4.5 hours with a household 240-volt charger or around 30 minutes with a public DC 100-kW fast-charger. Drivers can extend the range even further by using the steering wheel paddles to dial-up the four-stage regenerative braking system.

Safety-wise, the Ioniq Electric comes bundled with a reversing camera and driver-side blind-spot monitoring. Limited adds blind-spot monitoring on both sides and rear cross-traffic detection, and the Ultimate Package throws on automatic emergency braking, lane departure warning, and adaptive cruise control with auto start/stop. The Ioniq Electric has not been crash-tested by any major agency; however, the Ioniq Hybrid was tested by the Insurance Institute for Highway Safety (IIHS) where it scored excellent ratings in every category and earned a Top Safety Pick+ designation for 2017.

The Hyundai Ioniq Electric is a no-nonsense value proposition. The straightforward styling and ergonomic interior will relieve those turned off by the designs of some EVs and hybrids, and the price—especially after a full $7,500 credit—is affordable for many people. While the range is short, it could work for plenty of drivers whose daily needs aren’t heavy on mileage or who can recharge while out and about. It deserves consideration from anyone seeking a seriously-low operating cost and plenty of features for a reasonable sum of money.

What's your take on the 2017 Hyundai Ioniq Electric?

Have you driven a 2017 Hyundai Ioniq Electric?
Rank This Car