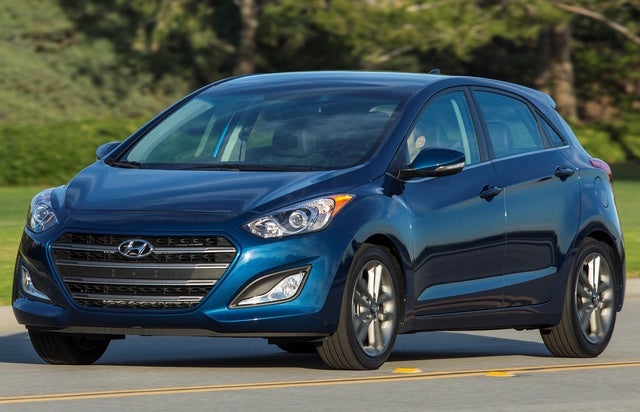 An all-new Hyundai Elantra is due for 2017, which is exciting news considering it's been so vastly improved over the last few years. Unfortunately, the Elantra GT hatchback isn’t included in the update because it is--deceptively--not exactly an Elantra. Compared to the standard car, it has different dimensions, a different rear suspension, and different bodywork. The Elantra GT is more of a Euro-style zippy hatchback that’s based on Hyundai’s world-market i30 platform, and it isn’t quite due for a redesign, though one may come as soon as 2018. The Elantra GT lineup is comprised of the base, GLS, GLS Tech, and Limited, and its main competition comes from cars like the Ford Focus and Volkswagen Golf. With a wide grille, LED taillights, and available 17-inch wheels, the Elantra GT is a handsome automobile for what it is and not the bland, gray shape that some Hyundais have been described as in the past.

You probably wouldn’t call the Elantra GT a “hot hatch” and the “GT” in its name doesn’t exactly make it a fast gran turismo, but it’s got enough grunt to play around with even if it won’t be winning many drag races--especially for a car with an average price that comes in around the $20,000 mark. Under the hood is a 2.0-liter 4-cylinder that makes 173 hp and 154 lb-ft of torque, and available transmissions are limited to a 6-speed automatic and a good-old-fashioned 6-speed manual. Power goes to the front wheels and the front wheels only. Fuel-economy figures, meanwhile, are predictably good (but not spectacular) for a small normally aspirated 4-cylinder car: regardless of transmission, the 2017 Hyundai Elantra GT will do 24 mpg city/33 highway/27 combined.

Compared to the standard Elantra sedan, the Elantra GT is nine inches shorter overall, and its wheelbase is two inches shorter. It’s also a fifth of an inch wider and 1.4 inches taller, and has a more sophisticated rear suspension and a 22mm stabilizer bar that makes for notably better handling. Steering is by non-variable electronic power assist and a drive-mode selection system features Comfort, Normal, and Sport modes. A sport suspension is optional.

On the inside, the 2017 Hyundai Elantra GT features a little bit more room up front and a little less room in back, and ventilated front seats are a new option. In general, it’s a fairly plain but functional interior and the fit and finish is commensurate with a car in this price range. Heated rear seats are also available. Heated front seats, meanwhile, are standard, along with a rear window wiper, cruise control, a cooled glove box, and a USB port. Other options include a 10-way power adjustable driver’s seat, remote start, automatic climate control, a panoramic sunroof, leather upholstery, and automatic headlights. Also available is the BlueLink infotainment system, with navigation, HD Radio, and Apple Siri Eyes Free integration.

Part of the appeal of a hatchback is the storage space, and the Elantra GT has 23 cubic feet of it, which is quite impressive. With the rear seats folded down, that grows to an even-more-useful 51 cubic feet, and there is a shallow storage tray underneath the cargo floor for smaller items. The Elantra GT comes with seven airbags, anti-lock brakes, and traction and stability control, and a rear-view camera is optional. It has also scored 5 out of 5 stars for overall crashworthiness in government crash tests.

The Elantra GT isn’t a performance hatchback, but it’s a reasonably nimble little car and a really solid choice for somebody who wants a no-frills, fuel-efficient vehicle with plenty of room. Given how much space there is in back, it’s also a fine grocery-getter for a smaller family, and anybody with a reasonable amount of possessions would be able to load it up and head off to college. The 2017 model isn’t really the freshest on the market, but it’s more than fresh enough and still compares favorably with other hatchbacks from the U.S., Germany, and Japan.

What's your take on the 2017 Hyundai Elantra GT?

Users ranked 2017 Hyundai Elantra GT against other cars which they drove/owned. Each ranking was based on 9 categories. Here is the summary of top rankings.

Have you driven a 2017 Hyundai Elantra GT?
Rank This Car

How To Remove The Center Dash Vent On A 2017 Hyundai Elantra GT?

I'm trying to swap out the original radio on the base model of a 2017 Elantra GT with an aftermarket Apple CarPlay capable model. To do so, I need to remove the center dash vents (left and right of ...

109 views with 1 answer (last answer about a year ago)

Is it ok to buy a rebuilt salvage title car .It has only done 18k kilometer

Why Doesnt My Key Fob Work In The Morning But If I Hit The Start Button It ...

Every morning so far this week the key fob doesnt want to work at all but I can hit the button to start igintion. well I get off work say around 2. I use the key fob and it unlocks the the car.

What Should Tire Pressure Be In 2018 Hyundai Elantra

Which Car Is Better Worth My Time?

Okay so I got a 2017 Hyandai Elantra GT several months ago and I think it was a mistake but I was pushed into getting it. It's brand new and really nice but not really for me. I think I will just dr...