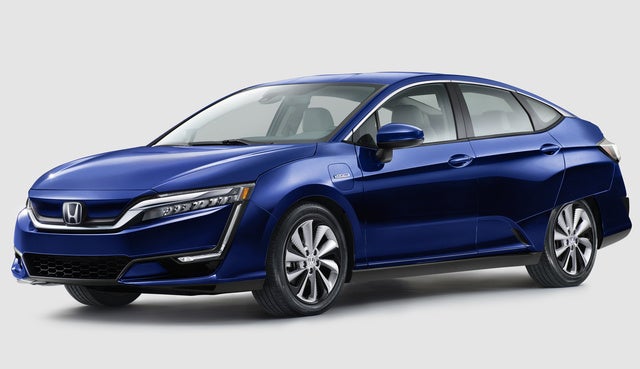 Looking for a Used Clarity Electric in your area?

CarGurus has 1 nationwide Clarity Electric listings and the tools to find you a great deal.

The Honda FCX Clarity made headlines a decade ago, even though most people have still never seen one. As a hydrogen fuel-cell vehicle, it was one of the earliest demonstrations of commitment by a major manufacturer to alternative fuel. Buyers of the rebooted Clarity Fuel Cell have been pretty much limited to Southern California, but Honda is now expanding the Clarity range to include both a plug-in hybrid and a full electric vehicle (EV). While it’s a significant step, the Clarity Electric looks like it will still be sold only in California and Oregon, although the plug-in variant should be available nationwide. The 2017 Clarity Electric is supposedly part of Honda’s goal to quintuple its EV sales over the next four years, although that might prove to be a challenge. In addition to the Clarity Electric’s limited availability, it has an inferior range compared to established EVs already on the market and isn’t particularly competitive on price.

From the outside, most people will likely mistake the Clarity Electric for an Accord. It shares its basic platform and electric powertrain with the Clarity Fuel Cell, and it runs on a total output of 161 hp and 221 lb-ft of torque. Its 25.5 kWh lithium-ion battery pack is located beneath the floor and behind the rear seats, in an effort to maximize interior room. Additionally, it’s expected to get the fuel-economy equivalent of 120 mpg city, 102 highway, and 111 combined.

The most important measure to EV buyers is range, and the Clarity Electric just doesn’t stack up. With a range of 80 miles, it falls well behind competition like the 107-mile Nissan Leaf, 114-mile BMW i3, 115-mile Ford Focus Electric, 124-mile Volkswagen e-Golf, and of course the 238-mile Chevrolet Bolt. That being said, buyers will largely be urban commuters who drive less than 80 miles in a day anyway, and with its fast charging capability, it can reach 80% battery capacity in half an hour. As for driving feel, it should be comparable to other EVs—it’s a relatively heavy car, but it carries its weight low down in the chassis and benefits from the instant torque provided by the electric motor.

The interior of the Clarity Electric seats 5 comfortably, and because the EV model doesn’t have the fuel-cell variant’s cumbersome hydrogen tank, there’s additional trunk space. Features should mirror those of the Clarity Fuel Cell and include power-adjustable heated front seats, a reversing camera, dual-zone climate control, an 8.0-inch touchscreen, and Android Auto and Apple CarPlay capability. Clarity Fuel Cell reviewers have noted that the interior is particularly high quality and has a futuristic feel.

Like the rest of the Clarity lineup, the Clarity Electric will be equipped with Honda’s Sensing driver-assistance suite, which comes with adaptive cruise control, forward-collision warning, automatic emergency braking, and active lane control. As a new model, it has not yet been crash tested.

The Clarity Electric is a bit of an oddball—its availability is limited to two states, despite there being demand for EVs in cities across the country. Its price is also expected to be around $35,000 (before tax incentives), which puts it in the same price bracket as other EVs that easily beat it on range. The introduction of the 2018 Clarity Plug-in Hybrid also makes the Clarity Electric somewhat unnecessary, as the plug-in variant will not only be available nationwide but also boasts a range several times that of the Clarity Electric, thanks to its gasoline-powered range extender. Honda clearly wants to make a shift towards more electrified vehicles, but this is not the model that’s going to shake things up.

What's your take on the 2017 Honda Clarity Electric?

GuruZR4X3 The range of this car is actually 89 miles not 80. I'm not sure if the reviewer actually drove the car. This car is a smooth ride, very comfortable, quick (221lb/ft torque), super quiet, and handles well. The interior is on par with an Acura. The technology is formidable. Everything is standard, no pricey options. Yes, the range is less than a Focus, Egolf, or leave, but the ride is far superior!

Have you driven a 2017 Honda Clarity Electric?
Rank This Car

Looking for a Used Clarity Electric in your area?

CarGurus has 1 nationwide Clarity Electric listings and the tools to find you a great deal.