CarGurus has 1,008 nationwide Accord Hybrid listings starting at $8,888.

Honda says its best Accord is the hybrid. Does that ring true for you? 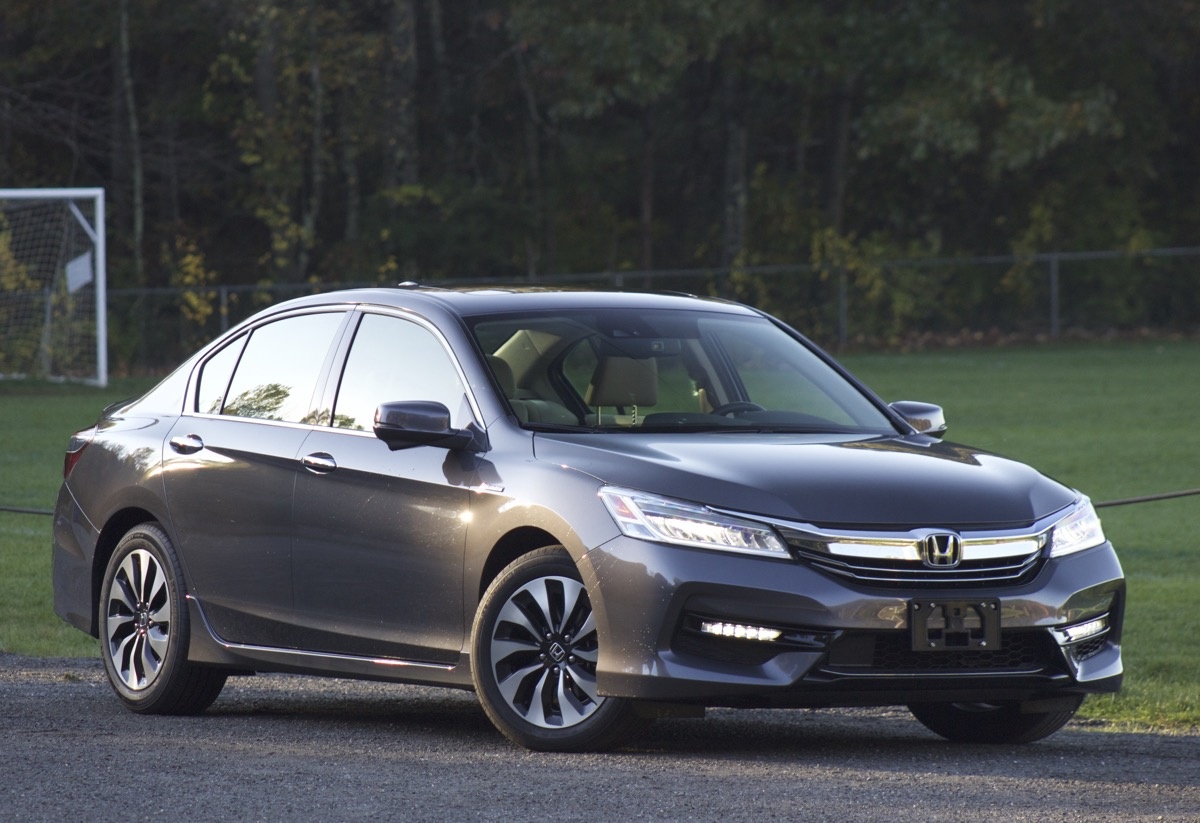 When it comes to building a hybrid, there are two ways you can go; build a standalone model, like the Prius or Insight, or develop a hybrid version of an existing, gas-powered car. If the name did not give it away, the Honda Accord Hybrid follows the latter method. Its more conventional layout makes the Accord Hybrid handle more like an upscale car and bestows it with more attractive styling. But is the more attractive hybrid option for you?

The Accord Hybrid was first sold from 2005 to 2007, during the early years of mass-market hybrids. In that time, Honda’s rival Toyota made hybrids some of the cornerstones of its lineup, with multiple Prius variants and hybrid versions of the RAV4, Highlander, and Camry. Meanwhile, Honda has been left playing catch-up. The Accord Hybrid was re-introduced for 2014 and 2015, and after a one-year hiatus, it’s back for 2017.

What you’ll find in the Accord Hybrid is a super comfortable ride and an upscale interior, but Honda’s infuriating infotainment system gets in the way. Is it enough to prevent us from recommending the Accord Hybrid? Read on to find out. 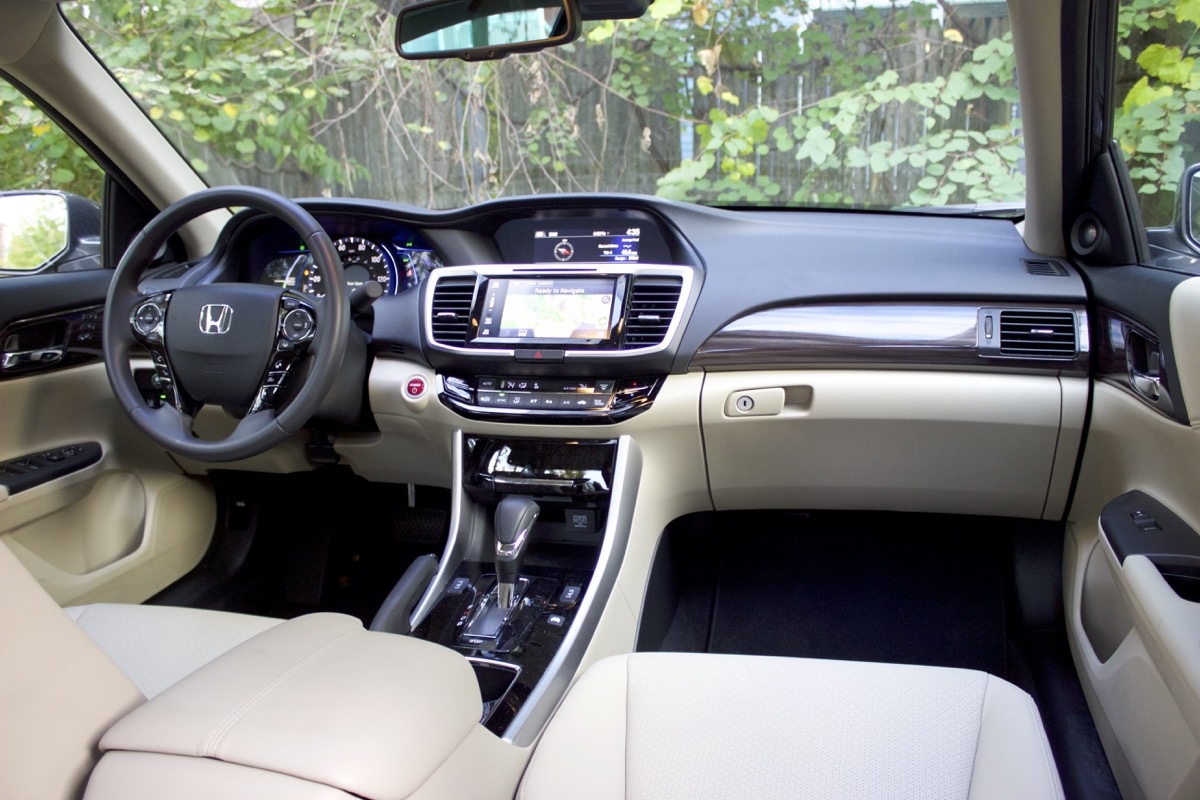 While the Hybrid was absent in 2016, the entire Accord lineup underwent a design refresh. Structural elements were stiffened and lightened, helping ensure a taut platform with firm handling and reduced weight. Although the past Accord Hybrid was distinguishable from non-hybrid versions, in 2017 they all look similar.

The Accord Hybrid benefits from the 2016 redesign of the rest of the lineup. Even though it was the incredible ninth generation that started in 2012, it has been an evolution of the staid design that started back in 2008.

The updated Accord grille features a large chrome bar with smaller slats, and there’s plenty of chrome around the windows, trunk, and lower rear bumper. But that traditional design has very forward-thinking cues (in the form of complex-looking available LED headlights).

Inside, the Accord Hybrid features a layout nearly identical to its non-hybrid counterparts’. The shifter is conventional, and the cubbies, cupholders, and center console are all deep enough to hold plenty of items.

As far as Honda is concerned, the Hybrid is the top of the Accord totem pole. While the conventional Accord trims include LX, Sport, EX-L, and Touring, the Accord Hybrid is available in Base Hybrid, EX-L, and Touring trims. The Base version comes standard with remote start, new woodgrain interior trim, a reversing camera, heated/power-folding side-view mirrors, Bluetooth hands-free calling and streaming audio, and USB input.

We drove the range-topping Touring trim, which features all the equipment from the lower two trims, plus rain-sensing wipers, front and rear parking sensors, and a satellite-linked navigation system. 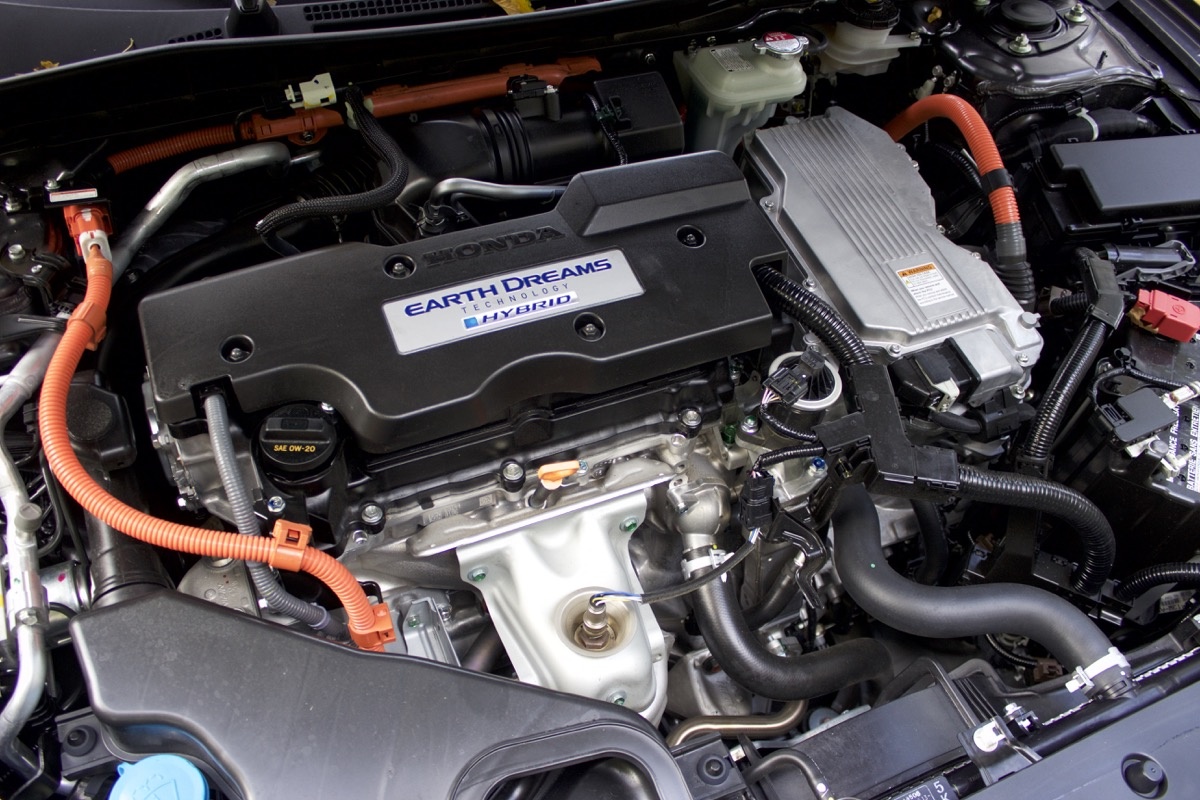 The Honda Accord Hybrid comes equipped with a 2.0-liter 4-cylinder “Earth Dreams” engine. It alone makes 143 horsepower and 129 pound-feet of torque. This engine is paired to an electric motor and a lithium-ion battery pack. The whole system makes 212 total horsepower, and the gas engine is paired directly to the motor/generator, sending power to the front wheels. A second motor-generator is paired directly to the front wheels.

What this means is that when you step on the accelerator, the electric power kicks in first, and the engine operates as a generator, powering the battery, which powers the front wheels. At higher speeds, the engine and transmission couple directly to the front differential, allowing the gas engine to directly power the front wheels.

The result is surprisingly quick acceleration for a hybrid. Power comes on easily, and you get the smooth all-electric feeling from a stop. You can get up to highway speeds quickly, with some engine noise coming from that 2.0-liter working overtime.

Cornering is sharp enough, too. Steering is pretty light, but body roll is minimal. You can put it through its paces and not overwhelm the Accord Hybrid. It’s no sports car, but there are much worse-handling cars on the market.

But a hybrid's real performance metric is fuel economy. The Accord Hybrid returns 49 mpg city, 47 highway, 48 combined. Compare that to the Toyota Camry Hybrid, which returns 42/38/40. As far as American automakers go, the Ford Fusion Hybrid returns 43/41/42, and the Chevrolet Malibu Hybrid is the only car that comes close, returning 49 city, 43 highway, 46 combined. 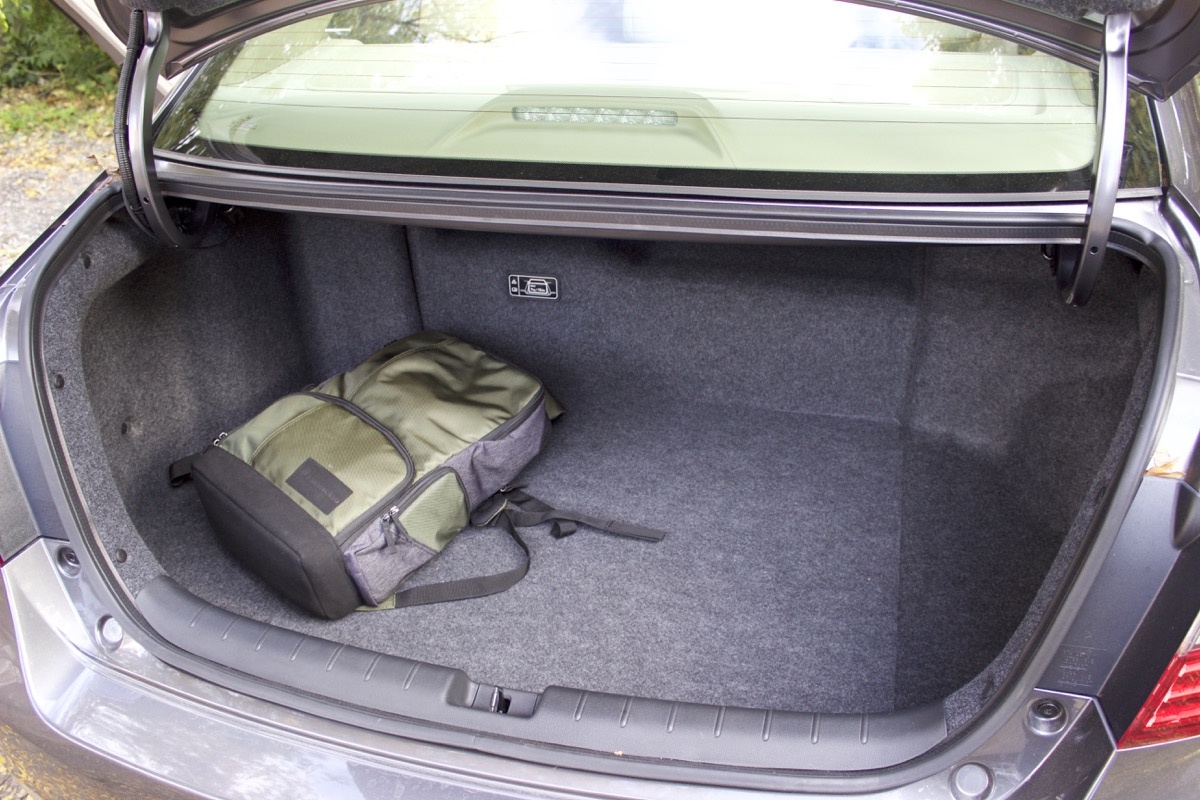 It's pretty impressive to consider just how far the family sedan has come. As we said, automakers take one of two approaches to hybrids. I prefer hybrid versions of existing gas-powered cars. The Accord Hybrid benefits from its more traditional layout, but it also receives many upgrades over the conventionally powered Accord.

The Accord Does have a terrible infotainment system. We’ll get into that more in the Technology section, but it should be noted that this impacts form and function. As for what the Honda does well, the Accord Hybrid has a terrific cabin.

The Accord offers a ton of head- and legroom in both the front and rear. It has cubbies and cupholders all around as well as a deep center tray for your phone, wallet, and keys. The cupholders are pretty deep as well—a key component of any good commuter car. 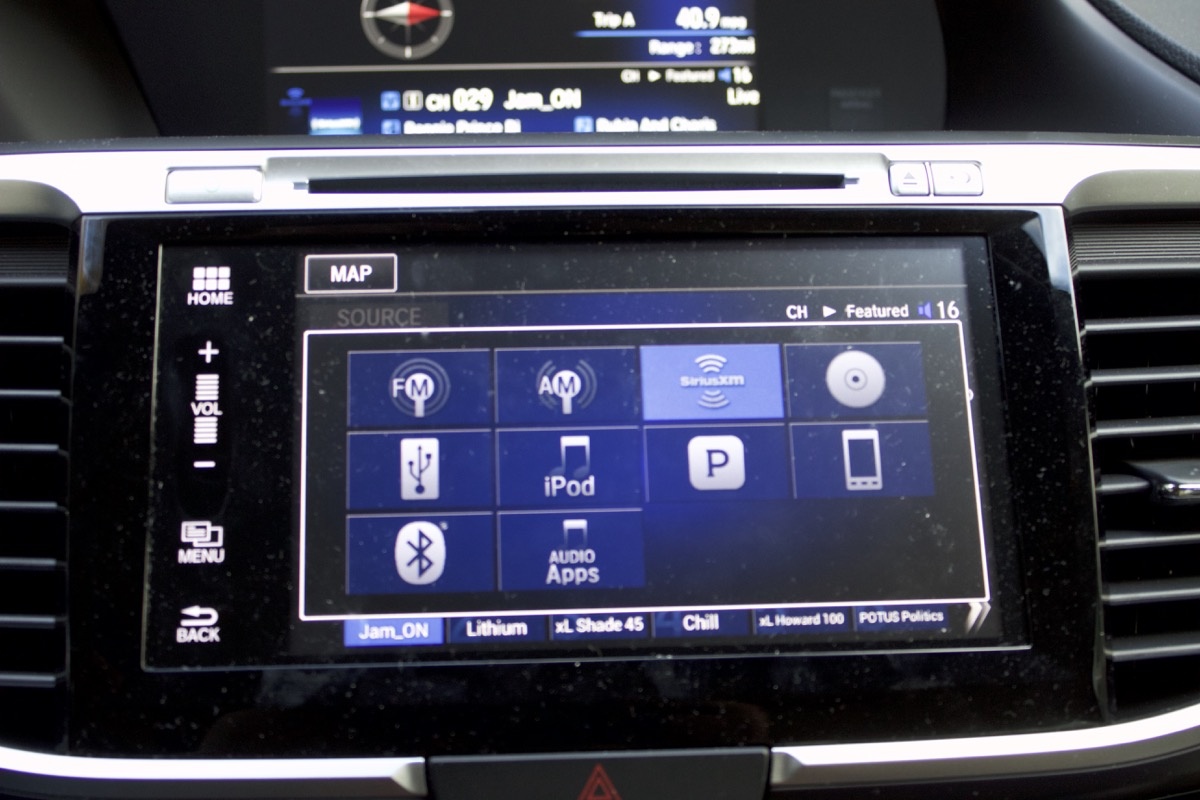 On the surface, the Accord is a high-tech vehicle, but Honda seems to have fallen victim to the pitfall of spending a lot of resources on technology without considering how the average person would use it. Honda’s touchscreen system is a hot mess. Menu layouts are confusing, and worst of all: It has no volume knob. This seems like an unforgivable mistake in a car interior.

If you want to see how an infotainment screen should work, check out Chrysler’s Uconnect or Chevy’s MyLink system. The common thread among those systems is they employ a single touch screen, and feature a customizable layout with large, easy-to-read icons. These systems have more in common with an iPad in terms of layout.

If you can either get over or get used to HondaLink, there are certainly helpful features within it. One way to get over its ergonomic deficiencies is to use the voice control. HondaLink has a really powerful voice recognition system, interpreting complex voice commands easily. No more having to work through multiple menus to enter an address. 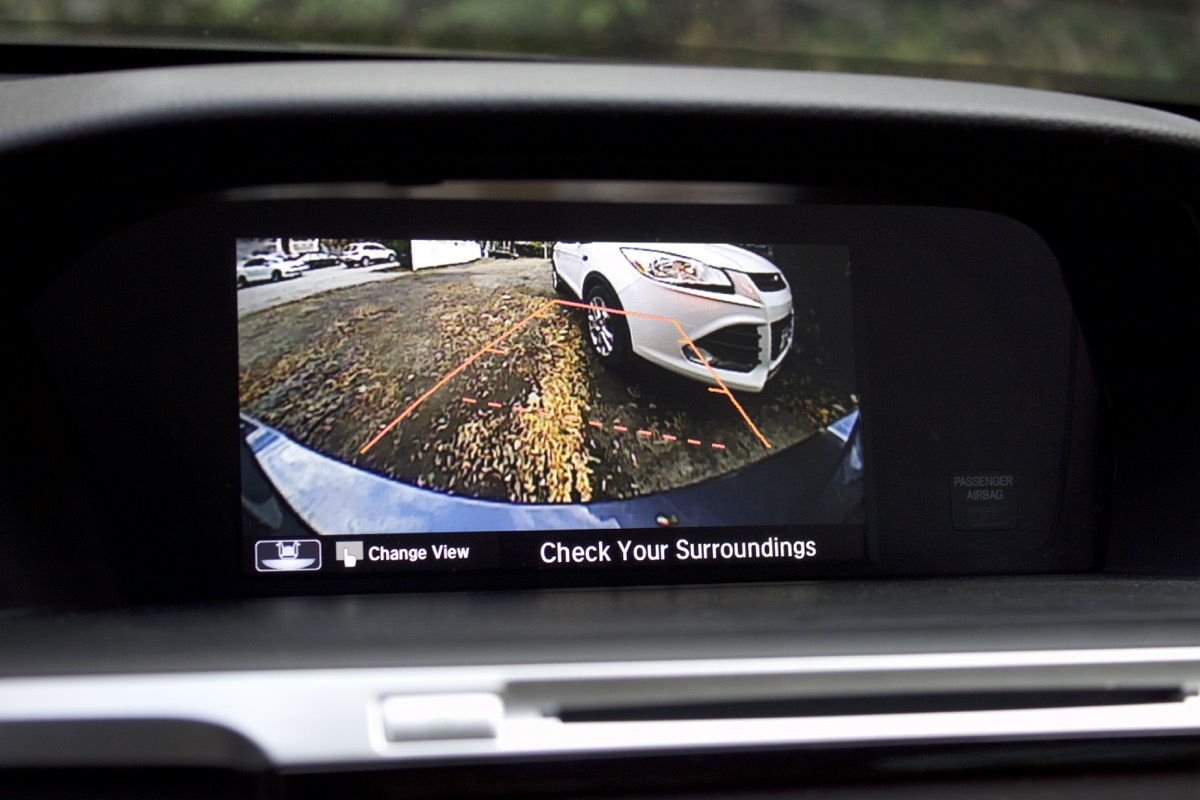 Every Accord Hybrid also comes with Honda Sensing, a suite of safety tech that includes lane-keeping assist forward-collision avoidance, and adaptive cruise control, as well as road-departure mitigation, which, as the name suggests, keeps you from veering into the median or oncoming traffic. It’s quite impressive that you get all this as standard equipment.

Our test model also came with Honda’s innovative LaneWatch system. LaneWatch builds on the concept of the blind spot monitoring system, but rather than just a sensor and a warning light, it uses a full color camera, networked into the digital screen. When you hit the right turn signal, or depress the button on the end of the turn signal stock, it activates, presenting a color video feed of your right flank. It even includes distance lines, so you know when a car has cleared your blind spot. 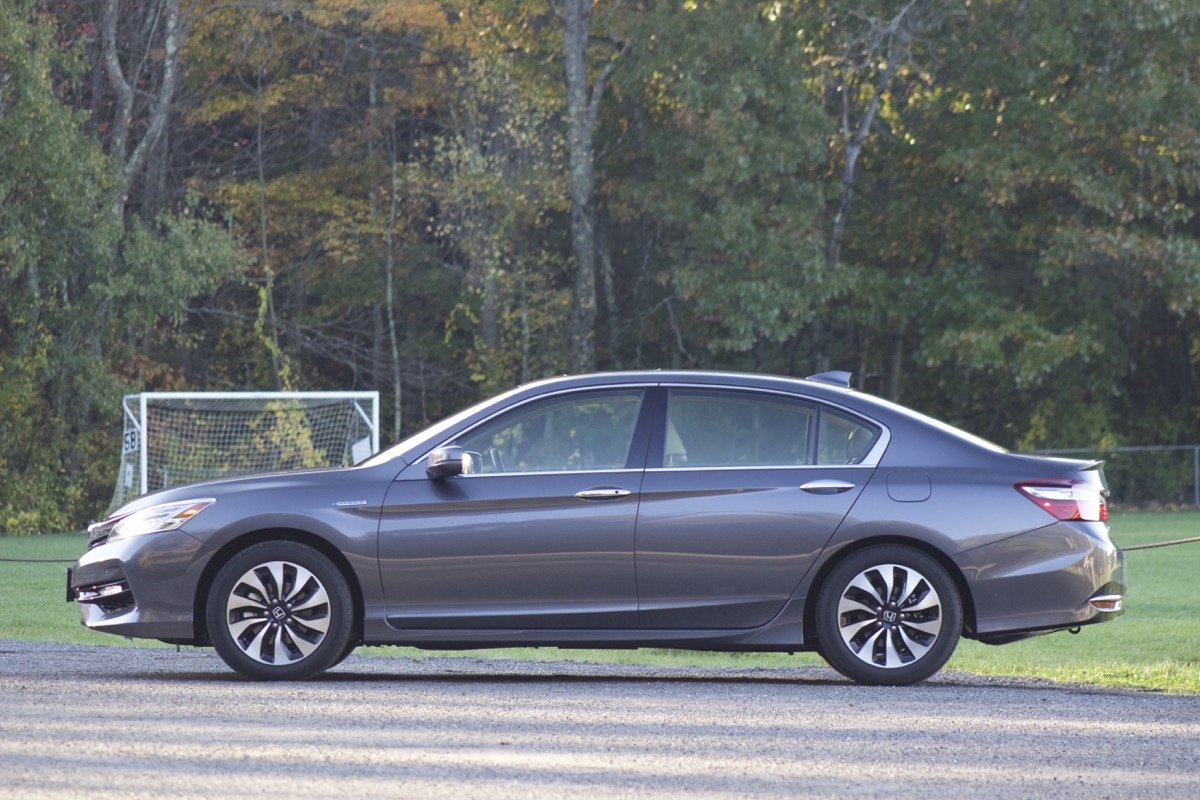 Be it the base model, EX-L or our Touring test model, the Accord Hybrid comes extremely well equipped. Honda can justify all those standard features with the Accord Hybrid’s price. The base starts at $29,605. An EX-L starts at almost $32,905. A Touring comes in at $35,995.

What's your take on the 2017 Honda Accord Hybrid?

Scooter41 Still awaiting a test drive to assess the accelleration of the hybrid vs the Accord 4 cyl. Love the mileage estimate and capability of short distances using electric. An owner of Hondas and Acuras since 1984. Have compared the 2017 Accord Hybrid vis the 2016 Acura TLX and prefer the styling of the Accord, especially the front and grill. Looking to buy in 2016 as the new 2017 Acura may not be available until early 2017.

TheHorror As it stands right now, Acura needn't sell sedans. The current Accord and Civic makes the TLX and ILX superfluous.

Users ranked 2017 Honda Accord Hybrid against other cars which they drove/owned. Each ranking was based on 9 categories. Here is the summary of top rankings.

Have you driven a 2017 Honda Accord Hybrid?
Rank This Car

Cars compared to 2017 Honda Accord Hybrid

CarGurus has 1,008 nationwide Accord Hybrid listings starting at $8,888.

2017 Honda Accord Hybrid DEAD, No Power, No Lights

My 2017 Honda Accord Hybrid EXL dont even have 100.000 miles yet. was working like a dream. I got home and went to work on my system, and when i touched a wire to my battery, it zapped and died comp...

Where Do I Find The Odometer Reading On A 2017 Honda Accord Hybrid?

How Much Gas Does A I4 Engine Normally Waste?

Have A 2017 Hybrid Accord And Wont Start. Has A Brake Fault And Power Fault...

2017 honda accord hybrid was running fine and turned off in the morning and come out later and wont start. Had several lights on the dash now, saying brake fault and power fault along with every other...

Does The 2017 Honda Hybrid Have A Hands Free/ Blue Tooth Display. This Symb...

2017 Honda Accord Hybrid Trims For Sale