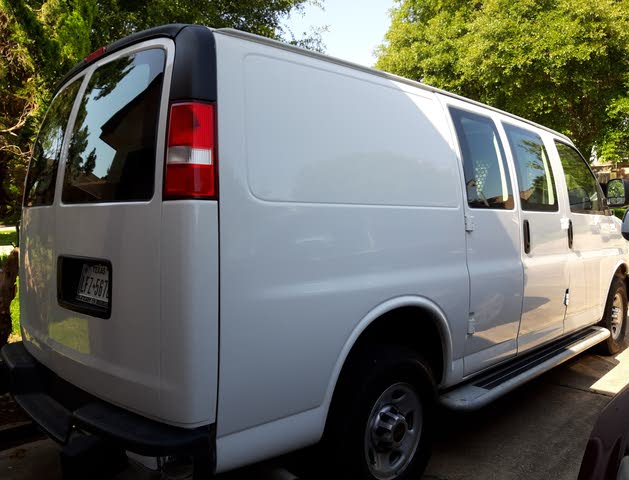 Looking for a Used Savana Cargo in your area?

Average user score
3 ⁄ 5 stars
Based on 3 reviews
Review by GuruRDV2V — drove truck and just did not feel it was right for what i wanted, did buy another from the lot, Read more

Don’t look for the 2017 GMC Savana Cargo full-size van to offer a whole lot of changes from its current version. After a number of upgrades for the 2016 model year, the upcoming year’s Savana Cargo trims are expected to sport only some minor tweaks to the available MyLink infotainment feature, and possibly a pair of reworked front seats.

Looking ahead, however, GM will possibly partner with Nissan in order to construct the Savana Cargo (and the Chevy Express Cargo) atop Nissan’s NV Cargo platform. Along with some updated styling cues, a new powerplant, and a new automatic transmission, GM hopes the next generation of their commercially oriented jumbo vans will reverse the commercial van market's lagging sales. But according to virtually everyone in the automotive media, these changes are not slated to occur until at least the 2018 model year.

For now, expect the 2017 Savana Cargo to return in both the three-quarter-ton 2500 and the 1-ton 3500 trim, each available in a stretched-out Ext version. Look for the standard-length Savana 2500 and 3500 to boast 224.1 inches (18 feet, 8 inches) of overall length and a 135-inch (11 feet, 3 inch) wheelbase. The Ext versions, meanwhile, measure 244.1 inches (20 feet, 4 inches) overall, with a 155-inch (12 feet, 11 inch) wheelbase. Cargo space remains 239.7 cubic feet in standard-length variants and 284.4 cubic feet in the Ext editions. The passenger seat can also be deleted in either trim, resulting in a significant addition to cargo-toting capacity, and an optional rear bench seat boosts passenger capacity to 5, but with a notable decrease in cargo area.

The 2017 Savana Cargo lineup keeps last year's powertrains, the standard engine for all trims remaining a 4.8-liter flex-fuel (FFV) V8 that mates with a 6-speed automatic transmission to put out 285 hp and 295 lb-ft of torque.
All trims will be eligible for an available 6.0-liter V8 mill that throws down 329 hp and 373 lb-ft of torque, also under the management of the 6-speed automatic. This is the only engine slated for the Savana Cargo that has EPA-estimated mileage figures, which stand at 11 mpg city/16 highway/13 combined in the current 2500 passenger variants, and 11/16/12 in the 3500 passenger vans. Additionally, the 6.0-liter V8 can be converted to burning compressed natural gas (CNG), with its power figures declining to 282 hp and 320 lb-ft of torque.

It should be noted that the optional 6.0-liter V8 is rumored to be on the way out, replaced, hopefully for the 2018 model year, by a more fuel-efficient 2.8-liter turbocharged inline 4-cylinder (I4) mill of roughly comparable power. As mentioned above, a new 8- or 10-speed automatic transmission is also anticipated to debut for 2018 or 2019.

Also available on all 2017 Savana Cargo trims is a potent 6.6-liter turbodiesel powerplant that uses the 6-speed automatic to pound down 260 hp and 525 lb-ft of torque. With a 10,000-pound maximum towing capacity, the turbodiesel is once again the engine of choice for some heavy-duty trailering (with the available HD towing package installed).

When the 2017 Savana iterations show up in dealer showrooms later this year, look for such rivals as Ford’s Transit and Ram’s ProMaster cargo vans to challenge the Jimmy with their multiple high-roof options and heftier toting space. Mercedes-Benz’s Sprinter will also return to rival GMC’s less-refined hauler.

Have you driven a 2017 GMC Savana Cargo?
Rank This Car

Looking for a Used Savana Cargo in your area?

Hi: How do I get a service and repair manual or CD for a 2017 GMC Savana 2500? The guys in my dealer's shop say that they don't even have one!!! I asked them how do they properly work on their custome...