A host of new standard features and options cements the Transit’s position as Ford’s EconoLine replacement. 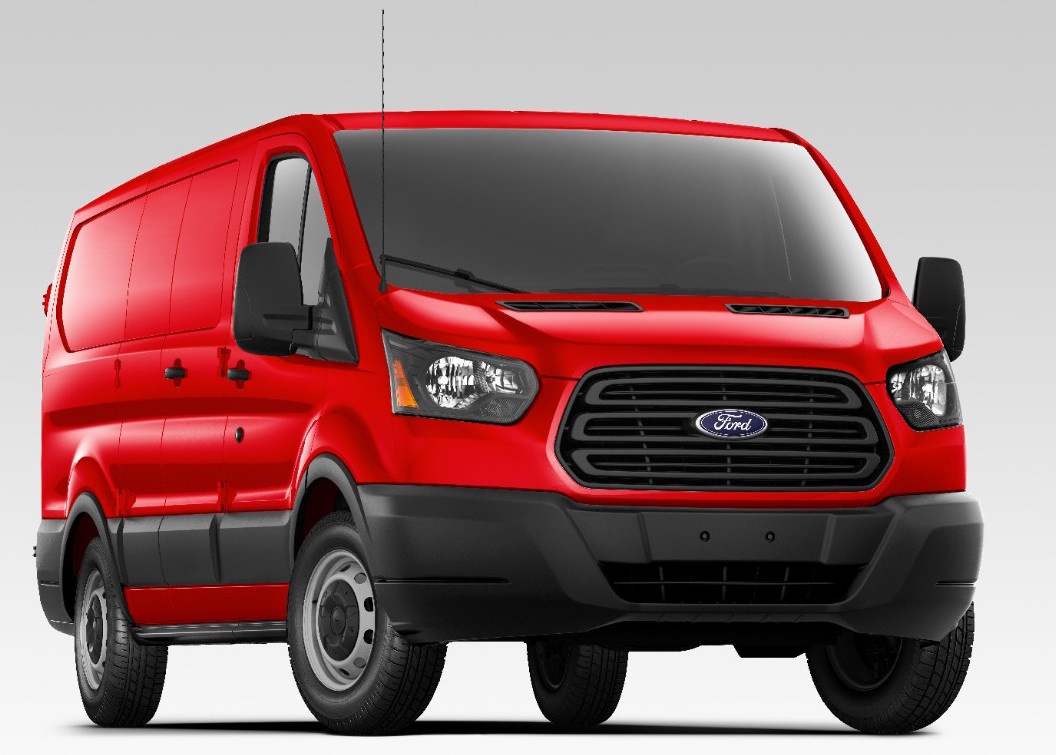 For 2017, the Transit brings more to the table with standard LED cargo lighting for van configurations, standard 3.7-liter V6 power for dualies, and an upgraded stereo with 4 speakers, a tweeter, and a subwoofer. The shorter, 130-inch wheelbase has also been made available as an option for the heavy-duty 350, and heated seats and power-retractable running boards are now available as options as well, bringing a little luxury to this workman’s wagon. 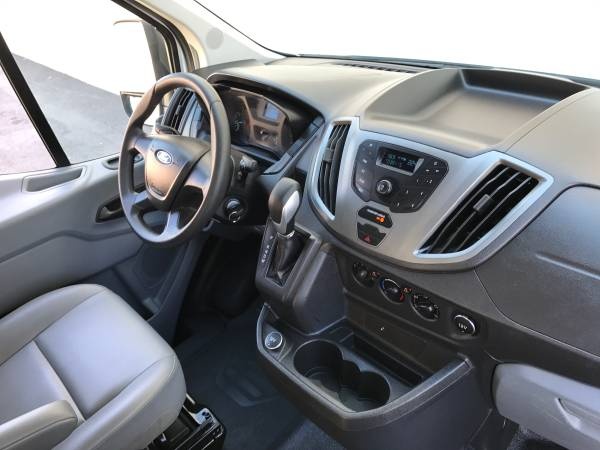 The Ford Transit may be a newcomer to American shores, but it’s been hauling cargo in Europe for a half-century. After a 2015 debut in U.S. dealerships, the Transit has been working hard to win over consumers who have been reluctant to accept anything but “body-on-frame” in a full-size vehicle. But easy driving, smooth riding, and relative gas sipping are all strong arguments for unibody design, and the Transit delivers them all. 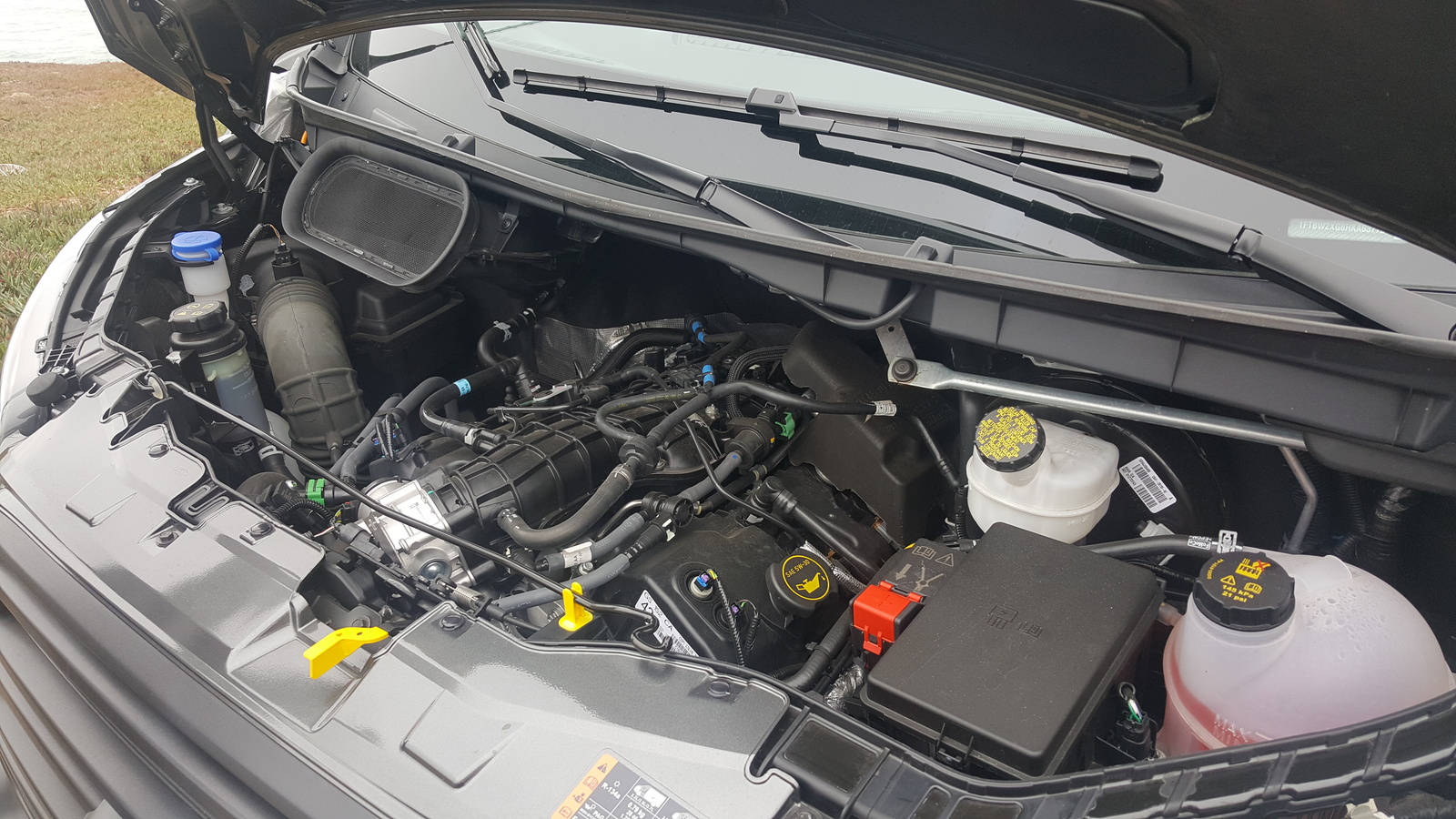 Performance improves this year as a result of the 3.7-liter V6 that's now standard for the Transit. With 275 hp and 260 lb-ft of torque, it’s definitely the baby of the bunch, offering a 2,740-pound payload and 2,900-pound maximum towing capacity. With 14 mpg city and 18 highway, the 3.7-liter V6 is EPA-estimated at 16 mpg combined.

If you want a little bit more, the 3.5-liter EcoBoost V6 delivers 310 hp and a best-in-class 400 lb-ft of torque, and it delivers the same combined mileage as the 3.7, though strangely with a 1-mpg bump in city and highway ratings. Driving around with the back mostly empty, I managed closer to 14.5 mpg and envision this plummeting precipitously as you add heavy cargo. The EcoBoost engine with options mentioned above grants the Transit a 4,200-pound payload and 6,800-pound towing capacity, just 700 pounds shy of the Transit’s maximum.

Finally, a 3.2-liter, turbodiesel inline 5-cylinder delivers 185 hp and 350 lb-ft of torque and dominates the fuel-economy competition with an EPA-estimated 18 mpg city and 25 highway for a combined rating of 21 mpg. Interestingly, both this 3.2 and the 3.7 can be configured for alternative fuels, with the turbodiesel ready for biodiesel consumption and the traditional V6 ready for CNG or propane.

Driving the EcoBoost engine, I was shocked at how well it could motivate the 4,000-pound van, scooting it along with no perceived struggle. Power was substantial nearly directly off idle and built confidently as the turbos continued to spool. Obviously this would be affected dramatically with a full load, but its performance demands comment regardless. 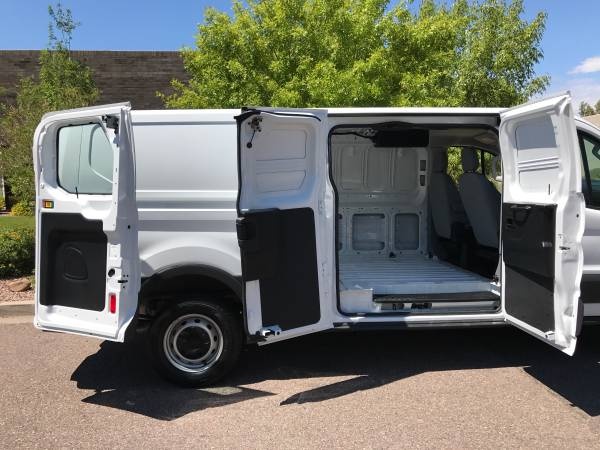 Whatever your needed function, it seems the Transit has a form. It can seat between 8 and 15 people—or none at all if you so choose. It can rise up to fit a 6-and-a-half-foot-tall man standing comfortably inside and can easily accommodate full-size plywood sheets flat on the floor with the extended wheelbase. All this and it’s still easy and comfortable enough to drive in traffic, with a light, responsive steering column that belies its impressive size.

Of course, you can’t expect traditional comfort here—this is still a work van, after all. Still, Ford is trying hard to make that as little a compromise as possible with an attractive interior and some upscale features like autonomous safety, headed seats and those power running boards. There’s still a ton of hard plastic absolutely dominating the interior, but that’s to be expected in a commercial vehicle. My one gripe was with the reach to the Sync system’s too-small touchscreen. An uncomfortable distance meant it was simply too far away to reach easily in traffic, and I found this to be a dangerous activity at best.

But the main purpose of a Transit is hauling, whether it be cargo or people. If people is your jam, go with the 148-inch wheelbase, and you can pack 15 warm bodies inside, and with the 81.5-inch roof, they’ll be able to stand up inside as well. The shorter wheelbase drops down to 8-passenger capacity or can be configured without rear seats for cargo instead. As mentioned, the longer wheelbase can accommodate full-size plywood sheets lying flat on the floor, and 14-foot sections of pipe or lumber are no problem. The 130-inch wheelbase can still handle 10-foot lengths of material as well, more than enough for nearly any trip to the hardware store, unless you’re building your own house. 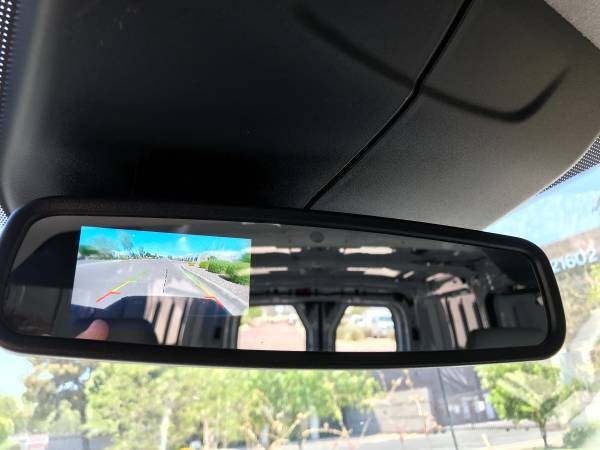 Tech is certainly not the Transit’s focus, but there’s still some to be had if you option it correctly. Sync 3 is on hand for a functional and intuitive, if not attractive, interface, with navigation if you pay for the upgrade. And Ford has committed to adding Apple CarPlay and Android Auto to all 2017 models, so you'll be able to mirror your smartphone of choice for enhanced connectivity.

More importantly, there’s a new standard feature called Side Wind Stabilization that hasn’t been getting much press. It acts as a stability control system that’s activated by strong gusts of wind. As I’m sure you can imagine, a vehicle with such a prodigious profile can get quite lively in high-wind situations. If this system detects swerving resulting from high winds, it will gently apply the brakes on the appropriate side to keep things nice and straight. That’s useful tech. 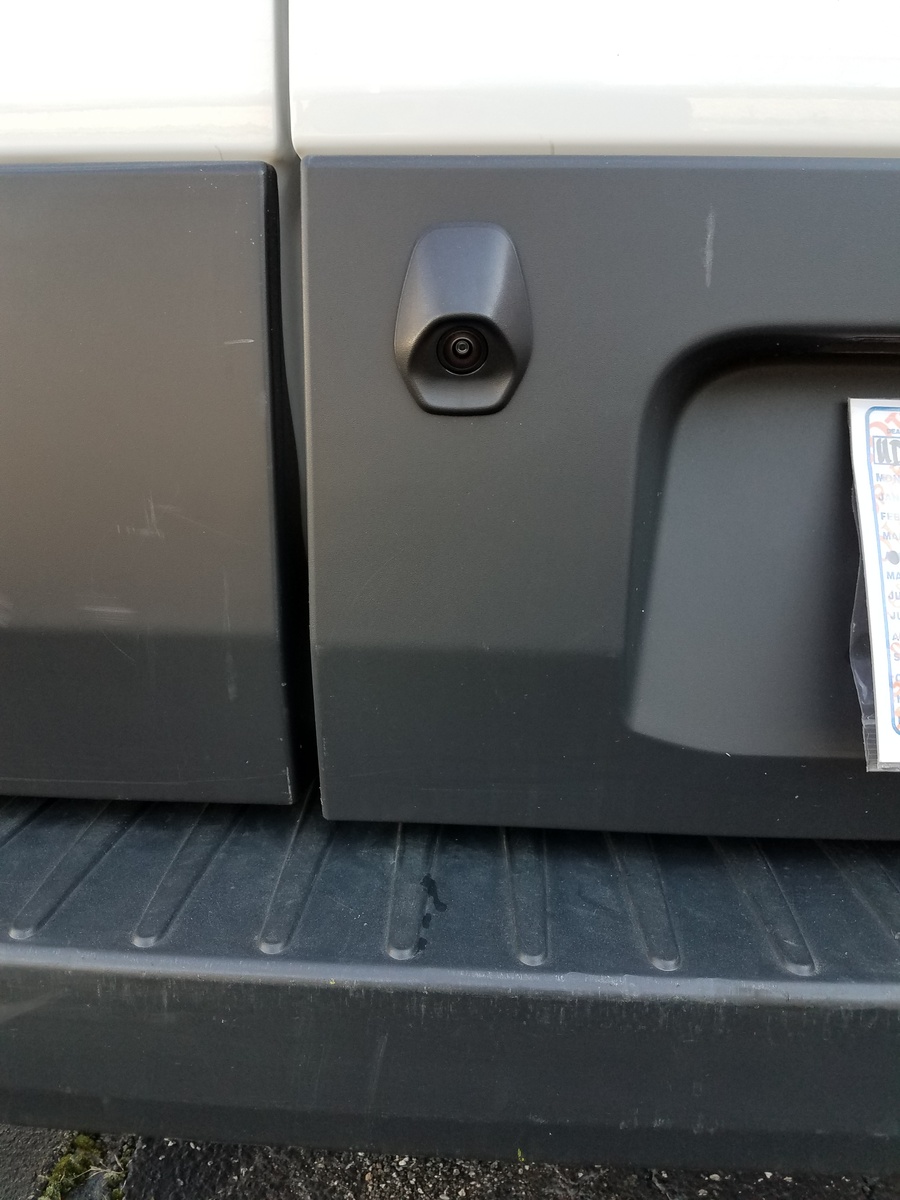 With the usual suite of standard airbags and traction and stability control, the Transit offers a few extras to keep you safe. A standard reversing camera can be supplemented by rear parking sensors and a reverse warning beep, and the truly safety conscious can add a lane-departure warning system with driver alert, though no blind-spot monitoring system is available. This is probably a good idea, as the Transit is just one big blind spot, even with the extendable mirrors. The optional all-around windows would help, but there’s no getting around that this is just a huge vehicle.

Government testing hasn’t been impressive for 2017, mostly with poor rollover ratings hurting otherwise decent scores. Rollover ratings for the Transit can drop as low as 2 out of 5 stars for the high-roof versions, and consequently overall ratings can vary between 3 and 4 stars, though not all versions have been tested. Of the configurations tested, all received a 4-star frontal crash test rating and a 5-star side crash rating. 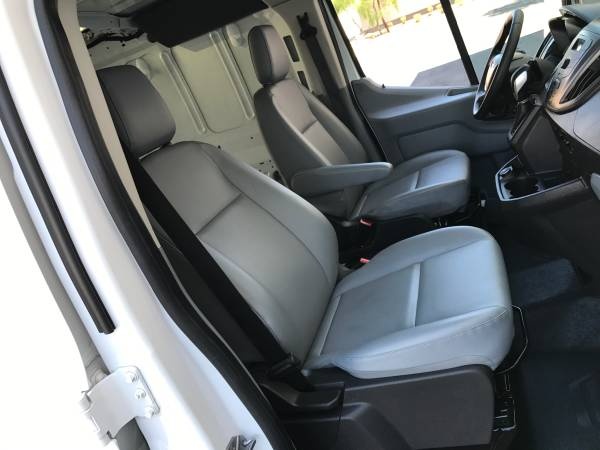 The Transit is not the cheapest option in its segment—that honor goes to the Ram ProMaster, and with that you’d have to deal with much more limited functionality and front-wheel drive. It’s not the best-appointed or the most capable with regard to towing, either. The Mercedes Sprinter and Nissan NV take those titles, respectively. But the Transit has been the cargo king in Europe for 50 years, and it’s had to be impressive to replace the iconic EconoLine. So far it’s done the job nicely, with a seemingly perfect blend of affordability, drivability, and versatility.

What's your take on the 2017 Ford Transit Cargo?

Wrangler_12745 Where is the review? This is a recap of the specs

Users ranked 2017 Ford Transit Cargo against other cars which they drove/owned. Each ranking was based on 9 categories. Here is the summary of top rankings.

Have you driven a 2017 Ford Transit Cargo?
Rank This Car

How Do I Enter A Larger Shopping Area Description

The dome/map lights will not work for the switch or even with the door opening. I can not get them to work from the van when off or running. The dome lights can get powered on from a 12 volt source ...

Do you lease refrigerated Vans?

Anyone Know What This Is For?

Have a 2017 Transit 250, and this headphone looking jack is under the radio.

What Is Purpose Of Syrofoam That Extends Out The Rear Of The Front Headlin...

Is there any reason not to cut it off flush with the back edge of headliner?