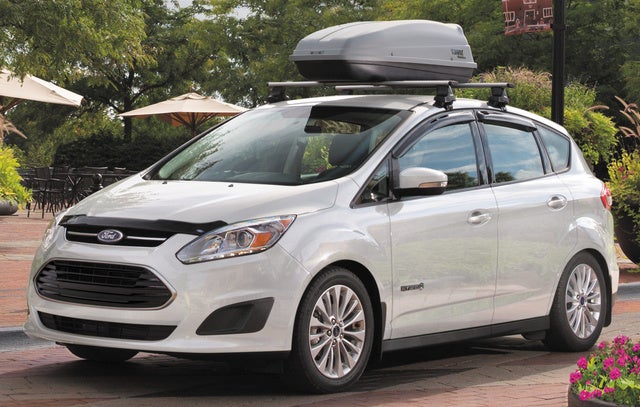 The Ford C-Max is a bit of an oddity in the U.S. In the rest of the world, it would be called an MPV (multi-purpose vehicle), which is kind of like a compact minivan or tall wagon. Here, it’s in a class virtually by itself—the Toyota Prius V is its only real competition.

The five-seater C-Max has seen few updates since its 2013 U.S. launch. For 2017, Ford makes some minor cosmetic changes and tightens up the available trim levels. Gone is the SEL trim, and a new range-topping Titanium puts the C-Max’s trims in line with those of other Ford vehicles.

As in years past, the 2017 C-Max comes with a choice of two drivetrains: hybrid or plug-in hybrid. Ford offers no gas-only version. Both drivetrains are based on a 141-hp Atkinson-cycle engine paired with a continuously variable transmission (CVT) that sends power to the front wheels.

The C-Max Hybrid adds a 1.4kWh lithium-ion battery and permanent-magnet AC synchronous electric motor, which is good for a total output of 188 hp.

The plug-in—known as the C-Max Energi—has the same powerplant, but adds a larger battery. The specs aren’t yet out for 2017, but the 2016 model had a 7.6kWh lithium-ion battery that was good for an electric-only range of 19 miles. It could be charged fully in 2.5 hours from a 240-volt outlet or 7 hours with a standard 120-volt outlet.

Details have yet to be released about pricing or option packages, but we do know that the SE Driver Assist package adds the Sync 3 infotainment system, a power liftgate, and reverse sensors. The SE Comfort package includes leather seating, a power driver’s seat, plus heated mirrors and front seats.

Other options include a fixed panoramic glass roof, a keypad on the driver door that locks and unlocks the car, and navigation.

Christine Like it a lot. Wish it was more widely available in my area. Test drove one... Feels like a toy. But just fine otherwise.

Aargonaut I have a 2017 Ford C-Max Energi. I also had a 2016. I put 150K miles on the 2016 and then bought the 2017 and have put 60K miles on it. They are relatively free of mechanical problems, and because the engines turn off for a substantial portion of the driving, even in straight hybrid model. So, oil changes only need to be made every 15,000 miles or so. The 2016 had an electrical problem where two wires in the battery control system rubbed together until they wore off their sheaths and shorted out causing the car to stop running. The repair was not expensive. It also had problems with the navigation system. The only problem with the new one is the telematics control unit needed to be reset which is done by removing fuze 67 for a minute or so. The car is based on a European design and has good road feel. The caster in the rear is adjusted for handling, but the rear tires tend to wear on the inside. The C-Max feels much more substantial than the Prius's I've driven. The seats are fairly upright and are neither as soft as standard American seating nor as hard as Teutonic German car seating. The steering wheel telescopes and has a full set of audio and cruise control functions. The dash board lacks a tachometer, but gives you lots of information which makes you drive like an old person. For example, it tells you how much of the energy you've returned to the battery when you brake -- you need to slow down over long distances because the battery can't take all of the energy at once. A cool display on the right hand side has a vine which grows leaves when you are driving "green" and which fall off when you accelerate or brake too hard or drive too fast. The display can be changed to show you miles/gallon over time and a sideways bar chart showing how efficient your braking, cruising and acceleration have been. My main gripe is that the battery system is circa 2013 and is out of date. It only gets 19 miles per charge, only charges at half the speed of more modern systems such as the Honda Clarity, Chevy Volt and Chrysler Pacifica Plug-in. Don't even mention a Tesla or Chevy Bolt for charging times. On the other hand, you don't have to have charging station paranoia and can fill up with unleaded where you get desperate when you get down to about 100 miles. This is particularly true in central Pennsylvania. The Amish don't need no stinking charging stations. In straight hybrid mode, I average in the low to mid-40 mpg range. If you are a soccer mom, you may never need gas. In central PA where electricity costs about $0.06 per kWhr, that is very efficient driving. It gets nearly 600 miles on a 14 gallon tank of gas.

Have you driven a 2017 Ford C-Max Energi?
Rank This Car

I do have a Cmax Energy 2017 and my battery 12v is often dead (I need to jumpstart couple of time per week). Everything of off inside the car so I do not know what can be the issue. Any hint? Thanks...

Battery Drain When Towed As An RV Dingy

I understand the C Max is great unless you tow it behind an RV 4 wheels down, where the batteries seem to be dead after towing for several hours. Is there a fix for this Looking to buy one and tryin...

How Do I Get A Car Out Of State?

is it possible to get a car out of state? and if so, how does the warrantee work?

Can I Use A Cmax To Jump Start Another Vehicle

using a ford cmax to jump start another vehicle. Where is the negative terminal on a ford cmax