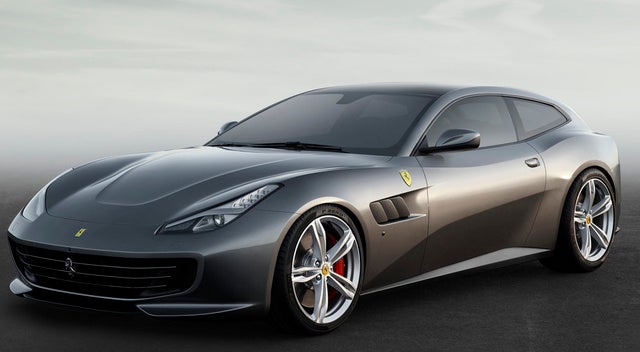 While it seems that just about every well-known performance-car manufacturer builds SUVs these days, from Porsche and Jaguar to Lamborghini and Maserati, Ferrari has mercifully resisted the trend. The closest it has come was with the 4-seat all-wheel-drive (AWD) FF “shooting-brake” introduced in 2011. For 2017, the FF has been updated, restyled, and renamed the GTC4Lusso. Ferrari’s first hatchback and only AWD model, it’s still unmistakably a Ferrari with its big V12 engine, curvy Pininfarina-designed bodywork, and familiar interior layout. Prices start at about $300,000, although adding options will quickly increase that number.

The GTC4Lusso may look unlike any other car with a prancing horse badge, but under the hood, its 6.3-liter V12 engine—similar to the F12’s—emits the familiar, glorious roar of a Ferrari V12 at full song. It makes 680 hp and 514 lb-ft of torque and is mated to a 7-speed dual-clutch automatic transmission mounted at the rear with paddle shifters—one of the best in the business. While fairly heavy at just over 4,200 pounds, the GTC4Lusso can still reach 60 mph in 3.4 seconds on its way to a top speed of 208 mph. These big Ferrari V12s are thirsty, and with all that curb weight and an AWD system, it should come as no surprise that the GTC4Lusso is one of the least fuel-efficient cars you can buy—it manages just 11 mpg city, 17 highway, and 13 combined.

In typical Ferrari fashion, the GTC4Lusso’s AWD system is extremely complicated and quite different from those of other manufacturers. It sends power to both the front and rear wheels from either end of the engine—a 2-speed transmission controls front-wheel power, which is taken from the nose of the crank, but it’s activated only when the car is in or below the fourth gear or going less than 80 mph. At high speeds, then, this is a rear-wheel drive (RWD) car, while around town you can enjoy the extra traction of AWD. The GTC4Lusso also gets the F12tdf’s 4-wheel steering system, an electronic differential, a sideslip-control system, adjustable magnetorheological dampers, and giant carbon-ceramic brakes for maximum stopping power. Despite being technically an AWD car, the GTC4Lusso’s steering is perfectly weighted, with no over- or understeering, and the ride quality is reportedly superb.

The GTC4Lusso’s interior offers a similar fit and finish to that of other Ferraris, with plenty of leather and metal trim and a steering wheel laden with controls, including a manettino lever for switching between Snow, Wet, Comfort, and Sport drive modes. A 10.25-inch touchscreen handles many of the car’s convenience features and is equipped with Apple CarPlay and a Google Earth navigation system. Another 8.8-inch display screen above the glove box is an optional extra. While this is an immensely practical car by Ferrari standards, don’t expect it to carry as much cargo as a Subaru Outback. The trunk offers a mere 15.9 cubic feet of space, though this expands to 28.3 cubic feet with the rear seats folded. The rear seats themselves aren’t particularly roomy and would be relatively tight for most adults.

According to Ferrari, typical GTC4Lusso buyers are younger, drive their cars farther, and have a passenger aboard more often than the average Ferrari buyer. That makes sense, as this is a truly usable, everyday Ferrari—even more so than the 2-seat RWD California. The GTC4Lusso has all the speed, sound, and handling of a proper Ferrari, but it can also be driven around town and has enough room and comfort for a long trip.

What's your take on the 2017 Ferrari GTC4Lusso?

Have you driven a 2017 Ferrari GTC4Lusso?
Rank This Car