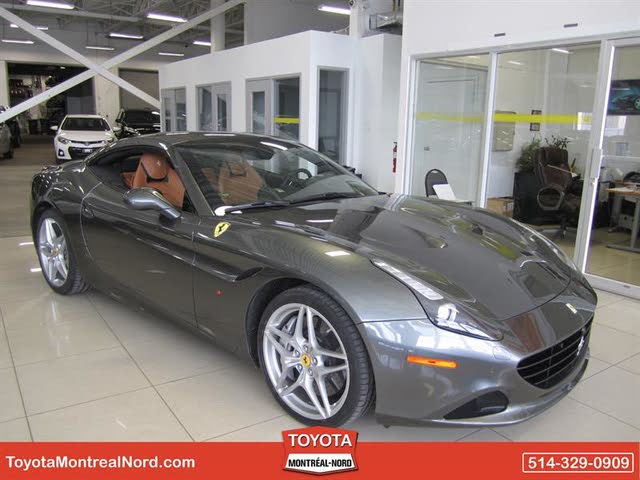 The California has been Ferrari’s entry-level model since its debut in 2009, and while it takes its name from the ultra-exclusive 250 GT California Spider of the late 1950s, the new California is an entirely different car. Less track-focused, the 4-seat California with its metal folding roof is the kind of car you could drive every day in the right climate. In 2015, the California was restyled inside and out and given a new turbocharged engine, and not much has changed for the 2017 version. While technically entry-level, the 2017 California is still a highly exclusive $200,000 car.

The California is outfitted with a 3.9-liter twin-turbo V8 engine that’s more powerful and fuel efficient than its previous 4.3-liter V8. The new engine makes 553 hp and 557 lb-ft of torque, enough to push the car to 60 mph in 3.5 seconds and on to a top speed of 196 mph. For reference, that’s 63 hp and 185 lb-ft more power than the old California’s engine, and the new numbers put the car in the same league as the Bentley Continental GT Speed and Mercedes-Benz SLS AMG. The California’s V8 is mated to a 7-speed dual-clutch automatic transaxle, and it gets fuel-economy numbers of 16 mpg city, 23 highway, and 19 combined—about average for a heavy V8-powered cruiser. Despite being turbocharged, the engine has no dead spots or power-delivery lag, and most drivers probably wouldn’t be able to tell that it’s turbocharged at all.

Compared to the last-generation California, the new model has a revised suspension with faster magnetic dampers and a quicker steering box. The new V8 is also mounted lower than in the old car, which improves balance. The driver can alternate between Comfort and Sport modes—the Sport mode stiffens the suspension and improves throttle response. Large carbon-ceramic brakes keep the vehicle’s power in check, and an available Handling Speciale package adds extra suspension stiffness, quicker shifting, and a slightly louder exhaust.

The California does sacrifice some raw, all-out performance in the name of comfort. Even so, the cockpit is unmistakably Ferrari—particularly the steering wheel with its host of buttons and controls, including the manettino knob for switching between drive modes. The cabin is well-appointed despite the California’s lower price, with attractive stitching, carbon-fiber accents, and bolstered sport seats. Standard features include USB ports, a navigation system, cup holders, a touchscreen display, and Apple CarPlay.

The rear seats of the California are better suited for carrying kids than full-grown adults, but they can at least be folded down for extra storage space. The metal roof provides security and quiet even at high speeds, and it folds in about 15 seconds for full open-air motoring. If you live in, say, California, the car offers the best of both worlds in that respect. And unlike many convertibles, particularly those with folding metal roofs, the California looks equally pretty with the top up or down.

Ferrari purists haven’t had such nice things to say about the California, with many criticizing it as being too soft or more of a cruiser than a sports car. The wider market, however, has spoken with its checkbooks—the California has been selling quite well, and the new and improved version has only increased those numbers. While hardly a track car, it has the look, sound, and, for the most part, speed of a typical Ferrari, as well as enough comfort and practicality for everyday use. For many, that’s the perfect combination.

What's your take on the 2017 Ferrari California T?

Have you driven a 2017 Ferrari California T?
Rank This Car