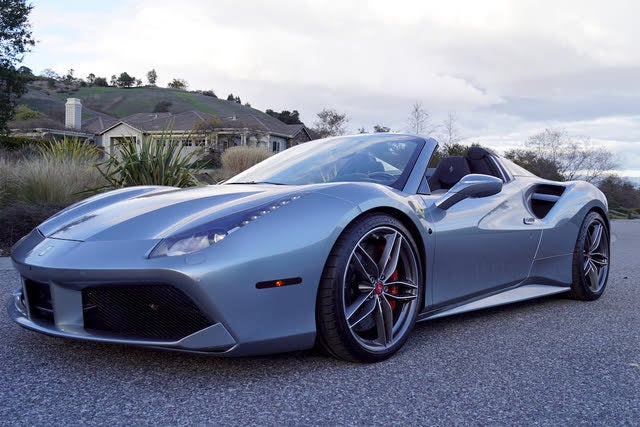 The 488 marks a big step for Ferrari. The company’s “entry-level” midengine offerings date back to the Dino of the 1960s and have evolved continuously since, but this is the first to come with a turbocharged engine. During the ‘80s, Ferrari produced a few turbos like the 208 GTB/GTS Turbo, the F1, and the F40, but none of those were volume models. Introduced in 2015 to replace the 458 Italia, the 488 is an improvement over its predecessor in just about every measurable way. In addition to its more aggressive styling, it is available as either a GTB coupe or a Spider with a two-piece folding hardtop. Ferrari expects about half of the 488s sold in the U.S. to be Spiders. The GTB will start at about $250,000, while the Spider will set you back another 30 grand.

Just about any Ferrari is a masterpiece from top to bottom, but the most important part of the 488 is the engine. This unit is a 3.9-liter twin-turbo V8 that makes an incredible 660 hp and 560 lb-ft of torque. Even though it’s well down in displacement from the old 458, which was already a blisteringly quick and powerful car, the new engine makes 63 more horsepower and 162 more lb-ft, and it also reaches peak torque lower in the rev range.

The 488 GTB can get to 60 mph in 3 seconds and 124 mph in 8.3 seconds. Like any other screaming Ferrari, the V8-powered 488 sounds fantastic, although some might prefer the wail of the larger naturally aspirated 458’s engine, particularly at high revs. Spider models get a different, slightly louder exhaust system. Fuel economy isn’t a major concern for Ferrari buyers, but the 488 will do a fairly unimpressive 15 mpg city, 22 highway, and 18 combined. The only available gearbox is Ferrari’s fantastic 7-speed paddle-shifted dual-clutch automatic transmission. If you want a good old-fashioned open-gate manual, you’re a few years too late—Ferrari won’t even build one on special order anymore.

Like the 458 before it, the 488 has active aerodynamic features that keep it glued to the road or help it cut through the air, depending on the situation. Flaps at the rear adjust the diffuser in case more downforce is needed, and a small rear spoiler cuts drag or provides downforce at speed. As for its suspension, the 488 gets an enhanced version of the 458’s sideslip angle-control system, which works with the differential, stability control system, and active dampers to improve cornering. Any recent Ferrari buyer will also be familiar with the steering-wheel-mounted “manettino” thumb lever, which allows the driver to select from 5 different driving modes. Brakes are carbon-ceramic and derived from LaFerrari hypercar technology.

While the fixed-roof GTB has certain advantages over the Spider, like all closed cars do, the differences aren’t as pronounced in the 488. The Spider is a little over 100 pounds heavier than the GTB, but Ferrari claims an identical 0-to-60 time, a mere 0.4-second slower 0-to-124 time, and 95 percent of the rigidity of the GTB. The Spider also laps Ferrari’s Fiorano test circuit within a second of the fixed-roof car, and with its two-piece hardtop up (which raises or lowers at speeds up to 25 mph in less than 15 seconds), it looks nearly identical as well.

The 488’s cockpit is slightly different from the old 458’s, but it is still unmistakably Ferrari. As usual, most of the controls are on the steering wheel, from the engine Start button to the turn signals. The infotainment system features Apple CarPlay, and a racing telemetry system is available. Other options include various trim upgrades and a 12-speaker audio system with a 1,280-watt amp. Safety features aren’t much of a consideration in the world of Italian supercars, the 488 included, even if they have gotten more high-tech over the past 20 years.

The 488’s main competition includes the Lamborghini Huracán and the McLaren 650S, both of which are available in spider form. The Ferrari is the most powerful of the three, although it weighs a bit more than the 650S and is priced between the two. You can’t go wrong with any of the three, but only one comes with the prancing horse badge.