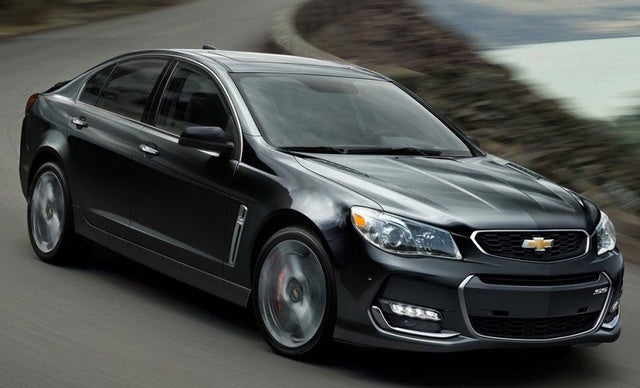 Average user score
5 ⁄ 5 stars
Based on 13 reviews
Review by GuruZVLX8 — In addition to the Corvette-based LS1 V-8 engine, Brembo disc brakes and interior amenities, this Chevy SS was equipped with the hard-to-find 6-speed manual transmission. For a certain generation of G... Read more
Review by Guru643VZ — Fast and plenty of features. Its shame theres so few out there and very few other models like it. Read more

The Chevrolet SS is the kind of 4-door super-sleeper sedan there are just too few of in the world today—and unfortunately, it will be gone after this year. The SS is a reworked version of the Holden VF Commodore SS, an Australian-market GM sedan, that rides on a platform last seen in the Pontiac G8 before that brand was axed in 2010. Sales of the Chevy SS have been disappointing (its nearly $47,000 price tag doesn’t help), and Holden is ceasing car production, so there’s little reason for Chevrolet to keep the SS going. While the SS is close to the end of its run, Chevrolet nevertheless introduces two new colors for 2017: Orange Blast and Nightfall Gray Metallic. The tradeoff, though, is the deletion of three others: Jungle Green Metallic, Mystic Green Metallic, and Some Like It Hot Red Metallic.

Even though the rear-wheel-drive (RWD) SS doesn’t look much sportier than a Malibu, it’s essentially a 4-door Corvette that can blow the doors off almost any other car on the road. Under its unassuming hood is a 6.2-liter LS3 V8 engine from the previous-generation Corvette C6. In the SS, the V8 makes 415 hp and 415 lb-ft of torque, and it’s mated to either a 6-speed automatic transmission with a manual TapShift mode or a 6-speed manual at no extra cost, although the automatic has been criticized for being a bit slow to shift. Equipped with this jackhammer V8, the 2-ton SS boasts a 0-to-60 time of 4.7 seconds, a quarter-mile time of about 13 seconds, and a top speed of 165 mph, putting it on par with plenty of more expensive performance luxury cars.

The weight of 4 doors and luxury accoutrements does catch up with the SS when it comes to fuel economy, however. Outfitted with a manual transmission, it gets 14 mpg city, 22 highway, and 17 combined, while the automatic does even worse at 14, 20, and 16. Buying an SS new will also get you stuck with the federal gas-guzzler tax.

Chevrolet didn’t just stuff a big motor under the hood of the SS and slap on a price tag, however. It has a fairly balanced 52/48 weight distribution and comes equipped with a multi-link rear suspension, a dual-mode exhaust system, big Brembo brakes, and GM’s Magnetic Ride Control system. Similar to the magnetorheological damper in the Camaro and Corvette, the SS uses magnetic fluid controlled by a magnetic field to continuously adjust damping characteristics and steering via a drive-mode selector (with Tour, Sport, and Performance modes). Also standard are forged aluminum wheels and Z-rated tires, while hydraulic suspension bushings help keep the ride compliant in this stiffened-up sedan.

Now that it’s going out of production (though somewhat ironically, as it didn’t sell particularly well), the Chevrolet SS will likely become a collectible car. Its unassuming style, powerful engine, and sophisticated chassis offer the perfect mix of ingredients for car enthusiasts, many of whom tend to buy used. The related Pontiac G8 GXP is a good example—despite its defunct brand and being 10 years old, G8 GXPs are holding their value remarkably well. Big, naturally aspirated V8 sedans with RWD are increasingly rare and will soon be even harder to find, so expect the SS to have a bit of a cult following. For now, though, bargains can be had on these final-model-year examples.

TheHorror Hundreds of armchair enthusiasts out there, bemoaning the dearth of choices among big manual RWD V8 sedans. When GM finally offers one, they hem and haw, but seem reluctant to put their money down. Now it's gone; let the complaining resume.

Have you driven a 2017 Chevrolet SS?
Rank This Car

My VIN Is Being Used By Another Listing And I Am Not Being Allowed To Enter...