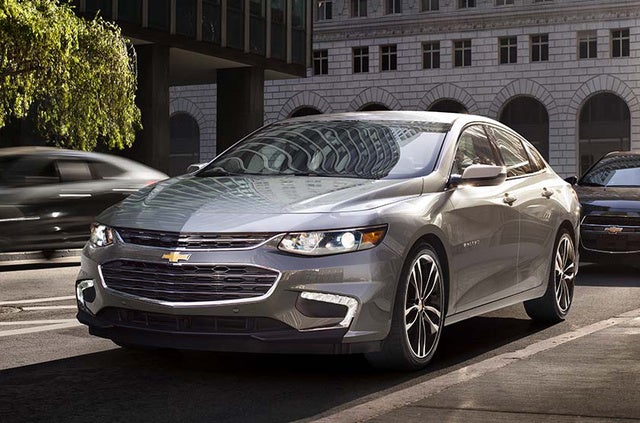 In order to keep up with current trends in the sedan market, manufacturers have been employing hybrid technology across more and more of their model ranges. Along with the current ninth-generation Chevrolet Malibu, which was introduced for 2016, Chevrolet also introduced a full hybrid version of its popular sedan, borrowing significantly from the tech-heavy Chevrolet Volt and taking aim at hybrid versions of the Ford Fusion, Hyundai Sonata, Toyota Camry, and, especially, the popular Honda Accord. The 2017 Chevrolet Malibu Hybrid features minimal changes over last year’s model and slots in just below the Malibu Premier in price.

The most interesting thing about almost any hybrid is its powertrain, which in the Malibu is a 1.8-liter 4-cylinder coupled to a 2-motor drive unit. Working together, the motors make 182 hp and 277 lb-ft of torque. The car can travel at up to 55 mph on electricity alone, while the gas engine comes on automatically at higher speeds, under heavier loads, or when it requires better acceleration. A digital cockpit display shows the driver how much the accelerator can be depressed before the gas engine kicks in. The Malibu Hybrid’s braking system, borrowed from the Volt, is reportedly smoother at sending power back to the batteries than are the regenerative braking systems on many other hybrids. Active grille shutters on the front also aid efficiency, and overall the Malibu Hybrid will do 47 mpg city/46 highway, figures that are right up there with the rival Honda Accord Hybrid and truly impressive for a car of this size.

The Malibu Hybrid has benefited from the considerable weight loss the regular Malibu achieved over its previous generation, but hybrid technology naturally adds a lot of heft, and the Malibu Hybrid weighs in at over 3,400 pounds compared to the regular Malibu's 3,100. All-wheel drive is not available for the Malibu, so those looking for a hybrid in a snow-heavy climate might want to check out other models.

The Malibu Hybrid’s cabin is much the same as the standard car's, but one unique and nifty feature is the Exhaust Gas Heat Recovery system, which takes thermal energy from the gas engine’s exhaust and uses it to heat the cabin and speed up the engine's warming process in cold weather. Leather upholstery, heated seats, and ventilated front seats are optional extras, as is Wi-Fi hotspot capability. Chevrolet’s MyLink infotainment system is centered on an 8-inch screen in the dash and features Apple CarPlay.

Like the standard car, the Malibu Hybrid is a solid safety choice. It comes with a standard rear-view camera, and available safety features include automatic emergency braking, blind-spot monitoring with lane-change alert, rear cross-traffic alert, active lane keeping with lane-departure warning, and a pedestrian alert system that uses a front camera to detect pedestrians and can automatically engage the brakes if necessary. The current Malibu has received 5-star ratings in federal testing, and the Insurance Institute for Highway Safety has given it top ratings of Good across the board. The 2016 Malibu also introduced the Teen Driver system, clearly a step towards marketing the Malibu and Malibu Hybrid as smart choices for a teenager’s first car. The system lets the owner program a maximum vehicle speed and lock it via a pin number.

The Chevrolet Malibu in general has gradually improved, and to keep it relevant in a constantly changing and increasingly competitive market, GM successfully introduced this full hybrid version with solid fuel-economy numbers and enough other positive attributes to keep it competitive with established players from Japan. It’s mostly a normal Malibu, with all the interior space and good ergonomics, but features technology from the more-expensive Volt and has fuel-economy figures that are worth bragging about.

What's your take on the 2017 Chevrolet Malibu Hybrid?

Have you driven a 2017 Chevrolet Malibu Hybrid?
Rank This Car

Buying A Car Out Of State?

Is it wise to buy a car out of state?

What Are The Hybrid Technology/software Changes From 2016 To 2017

I'm on the fence whether to eat the depreciation of buying a 2017 or buying a used 2016. Because Hybrid is reasonably new, I would expect there to be some significant technology/software updates to ...