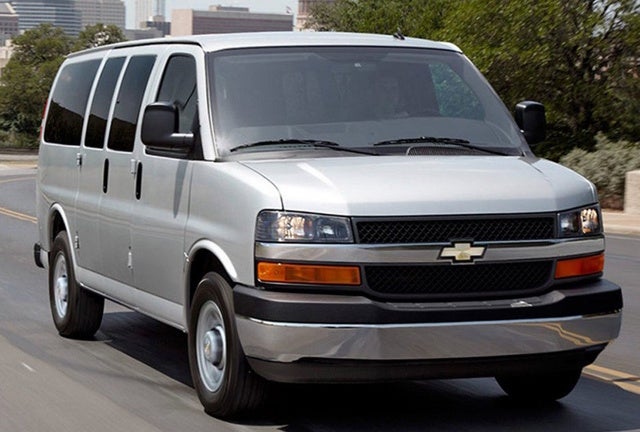 Awaiting a complete overhaul in the near future, Chevrolet’s Express full-size passenger van is expected to roll into the 2017 model year with few, if any changes. So it seems safe to expect little more than the full-size 8- to 15-seat van that we've grown accustomed to, and which many reviewers claim still lacks the modern refinements and efficiency of most of its rivals.

Chevy has actually mentioned a proposed partnership with Nissan that would allow it to manufacture its body-on-frame Express vans using the Japanese automaker’s NV chassis. Chevy would also likely give the Express a more contemporary look, along with a new engine and 10-speed automatic transmission. But don’t expect any of these upgrades until at least the 2018 model year. For next year’s Express lineup, the only tweaks that are even hinted at include a few enhancements to the optional Chevy MyLink infotainment feature and more comfortable front seats. The same upgrades should appear in the related GMC Savana vans as well.

Power for the Express comes from a 4.8-liter flex-fuel (FFV) V8 that puts out 285 hp and 295 lb-ft of torque under the management of a 6-speed automatic transmission. EPA-estimated mileage checks in at 11 mpg city/16 highway/13 combined. There is also an optional 339-hp, 6.0-liter V8 engine that uses the 6-speed automatic for 373 lb-ft of torque. Look for mileage of 11/16/12 from the larger powerplant.

Returning solely for the Express 3500 and 3500 Ext is an optional 6.6-liter turbodiesel V8 powerplant that throws down 260 hp and a whopping 525 lb-ft of torque, managed by the 6-speed automatic. Look for a 10,000-pound max towing capacity from the turbodiesel. Mileage figures are unavailable.

Express vans equipped with the 6.0-liter V8 can be tweaked to burn compressed natural gas (CNG); doing so will drop their power figures to 282 hp and 320 lb-ft of torque. There are no fuel-efficiency estimates for CNG engine. It is also worth noting that all Express trims come with rear-wheel drive (RWD) only.

Expect Ford’s Transit to again challenge the 2017 Express for full-size van supremacy, along with such rivals as Mercedes-Benz’s Sprinter, Ram’s ProMaster, and Nissan’s NV.

What's your take on the 2017 Chevrolet Express?

Powergroove I have a 2016 Chevy Express 6.6 liter diesel cargo van and get 19 average MPG. This is my daily driver and I am very happy with it. I drove 4 hours to a dealership that had this van with the 6.6 duramax in it. I wouldn't walk across the street for a 1 ton van with a sick six or a forlorn four in it.

Have you driven a 2017 Chevrolet Express?
Rank This Car

How Do I Find The Ignition Wire, And The Reverse Power Wire For Installing ...

I need to install a reverse camera system in a 2017 Chevy Express van. I am using a rear view safety system. I am supposed to tie into the ignition wire, and also to the wire for power to the reve...