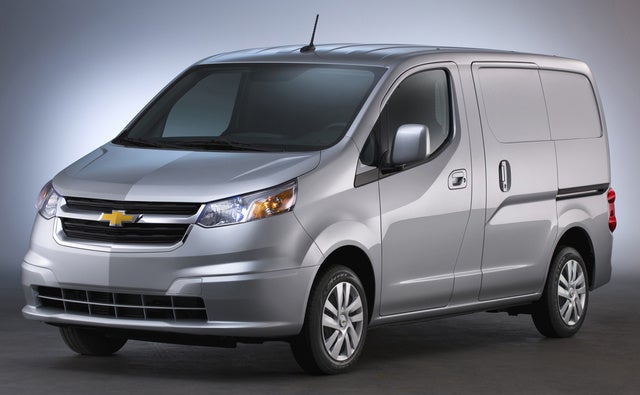 Feeling left behind a few years ago in the urban-oriented small delivery van market, Chevrolet responded in 2015 with the City Express. For 2017, this minivan is expected to differ little from the original, with 2-person seating, minimal appointments, a comparatively fuel-efficient powerplant, 122.7 cubic feet of cargo area, and the compact dimensions that work well in downtown traffic and big-city parking situations. And if this nifty Chevy van looks more than vaguely familiar, that’s because it’s unabashedly based on Nissan’s NV200.

Again offered in two trims, the entry-level LS and the slightly up-featured LT, this no-nonsense compact hauler is well-suited to those small business owners for whom a full-sized work van would be overkill.

There is one bit of news regarding the 2017 City Express: the U.S. Postal Service is considering this downsized work van to replace its aging fleet of mail-delivery trucks. When (or if) that will happen is, of course, a matter of speculation, knowing the slow pace at which the government operates.

In any case, look for the front-wheel-drive-only (FWD) 2017 City Express to return with a 2.0-liter inline 4-cylinder engine mated to a continuously variable transmission (CVT). Current City Express variations are estimated at 24 mpg city/26 highway/25 combined, while payload is maxed out at 1500 pounds. Reviewers caution, however, that loading this little mule to full capacity causes its performance to suffer noticeably.

The current 15-inch steel wheels and sliding passenger-side cargo doors are expected to remain standard on the 2017 City Express, as are such cabin features as cloth upholstery and a fold-flat passenger seat. Other interior features include a height-adjustable driver’s seat, power front windows, a tilt-only steering wheel, manual air conditioning, and a CD player with 2 speakers and an auxiliary audio input. Should a few extras be desired, the 2017 City Express LT is slated to add power door locks, heated power-adjustable outside mirrors, keyless entry, an extra 12-volt outlet, rear parking sensors, and cruise control.

Look for a couple of Glass packages to remain optional for the 2017 City Express trims, along with an Appearance package that boasts wheel covers, a chrome grille, and body-color door handles and mirrors. The LT offers a Technology Package that includes a 5.8-inch infotainment display, GPS navigation, satellite radio, a rear-view camera, and Bluetooth hands-free communications and music streaming.

Returning standard safety features aboard the 2017 City Express are expected to include 4-wheel antilock brakes (ABS), traction and stability control, front side-mounted airbags, front head-protection airbags, and daytime running lights. Be advised that there is no crash-test data on the City Express from either the National Highway Traffic Safety Administration or the Insurance Institute for Highway Safety.

Chevy has not yet announced when the 2017 City Express is to go on sale, but when it does, look for such rivals as Ford’s Transit Connect, Ram’s ProMaster City, and, of course, Nissan’s similar NV200 to challenge it in the segment.

What's your take on the 2017 Chevrolet City Express?

Have you driven a 2017 Chevrolet City Express?
Rank This Car